A Drawing of God Labeled “Yahweh and His Asherah” or the Egyptian God Bes? 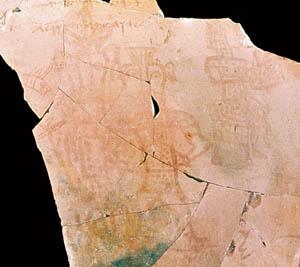 “Yahweh and his Asherah” is written across the top of this eighth-century B.C. drawing on a ceramic pithos, or storage jar, from Kuntillet ‘Ajrud in the eastern Sinai. Some scholars have theorized that these figures resembling the Egyptian god Bes (on the left in the photo above) are in fact a drawing of God and his consort. Others, however, have interpreted both figures as male. The recently published Kuntillet ‘Ajrud excavation report sheds some light on this enigmatic fragment, but many questions remain. Photo courtesy Dr. Ze’ev Meshel and Avraham Hai/Tel Aviv University Institute of Archaeology.

Everything about it has been difficult. Located in the Sinai desert about 10 miles west of the ancient Gaza Road (Darb Ghazza, in Arabic) as it passes through Bedouin territory separating the Negev from Egypt, Kuntillet ‘Ajrud is remote and isolated from any other settlement. In 1975, Tel Aviv University archaeologist Ze’ev Meshel and a band of nine volunteers, mostly from kibbutzimand a few colleagues as staff, decided to excavate at the site.

The finds from Kuntillet ‘Ajrud were fantastic. The zingers were two large pithoi, or storage jars, that weighed about 30 pounds each. The now-reconstructed pithoi are painted with deities, humans, animals and symbols, and feature a number of inscriptions, including three that refer to Yahweh and his asherah or Asherah, depending on your interpretation. Asherah is a pagan goddess. Was she God’s wife?

Below an inscription on one of the pithoi (referring to Yahweh and his asherah) are drawings of two figures easily and unquestionably identifiable as the Egyptian god Bes, in fact a collective name for a group of dwarf deities. Is this meant to be a drawing of God (i.e., Yahweh) with his consort Asherah? The scholar who published the chapter about the drawings doesn’t think so. She interprets it as two male deities—probably just the Egyptian god Bes—and not as a drawing of God and his goddess wife. Other scholars disagree, but this much is clear: The drawing was added to the pithos after the inscription was written, so the two may be completely unrelated.

Why has it taken nearly four decades to publish this final report? One reason is that everything about Kuntillet ‘Ajrud and its finds is so darn difficult to interpret—or even to see. The recently published report is a superb volume, and the discussion and interpretation will surely continue far beyond its pages.

To learn more about the site and finds at Kuntillet ‘Ajrud, including the fragment with the two figures of the Egyptian god Bes that may be a drawing of God labeled “Yahweh and his Asherah,” read BAR editor Hershel Shanks’s review article “The Persisting Uncertainties of Kuntillet ‘Ajrud” in the November/December 2012 issue of Biblical Archaeology Review.