Istanbul, now by far the largest city in Europe, is still expanding dramatically, with attendant challenges to the management of its heritage. The city and its predecessors, at the bridging point between West Asia and Southeast Europe, the Black Sea and the Mediterranean, were always situated at a crossroad of ideas, innovations and achievements. Recent large-scale rescue excavations of the Yenikapi-Marmaray projects (Marmaray 2007; Kocabas 2008) have demonstrated that there is fine prehistory still intact beneath the modern infrastructure (see also Dönmez 2006). 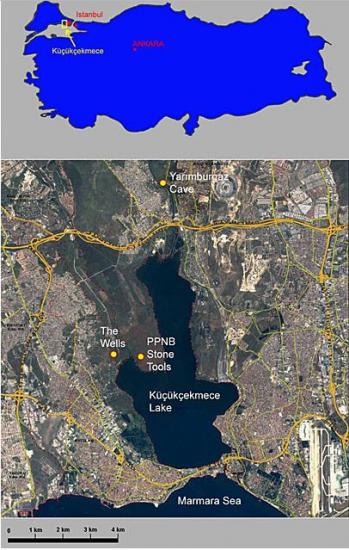 In a research initiated in 2007 (S. Aydingün 2007 & 2008) a cluster of promising new sites has been discovered during a survey around the Küçükçekmece Gölü (Figure 1), located 20km west of the Bosporus entry (H. Aydingün 2008).

The Küçükçekmece Gölü (Lake) is a shallow lagoon of the Marmara Sea with depths ranging between 4 and 18m. It is encircled on the southern sides by the modern Greater Istanbul suburbs of Küçükçekmece (800 000 inhabitants) and Avcilar (350 000 inhabitants), with modern settlement also approaching from the north. At the end of the last Ice Age, with the Marmara Sea land-locked and with a water level perhaps 90-120m lower than today, the lagoon and its western counterpart, Büyükçekmece Gölü, were deeply cut river valleys. Since then, the interplay between sea level changes, the particular Dardanelles-Marmara-Bosporus-Black Sea events (e.g. Özdogan 2007; Yanko-Hombach et al. 2007), sedimentation by rivers from the north and one of the most active tectonic zones in Europe and the Near East have modified the valleys: firstly into rias or drowned estuaries; then sea bays; and finally into the current lagoons (Meriç & Algan 2007). Despite these transformations, its shores have offered perfect conditions for prehistoric occupation over millennia, with the banks of the lower reaches and mouths of the rivers the most favourable areas. The well-known Yarimburgaz cave, with its many layers of Palaeolithic, Neolithic and Chalcolithic occupation, 6km north of the lagoon testifies to this (e.g. Özdogan et al. 1991; Arsebük 1996), and there is clearly a link between the cave occupation and the river/bay/lagoon resources.

Our survey of 2007 was arguably the most extensive ever carried out in this area, and the extreme drought of that summer favoured us, causing farmers in Avcilar's Firuzkoy district to use bulldozers to excavate two irrigation wells some 100m from where the Eskinoz River meets the western lagoon. The spoil contained many pottery fragments unseen yet anywhere near Küçükçekmece; the majority are of Middle Iron Age date (Figure 2) but a few sherds decorated with incised lines may belong to the Neolithic. The irregular profiles of the wells showed the presence of multi-period stratified deposits, best documented in the second well, particularly its lower levels. There a succession of marine, riverine and cultural layers show that phases of incoming seawater have filled the river valley alternating with meandering changes within the ancient riverbeds of the Eskinoz. 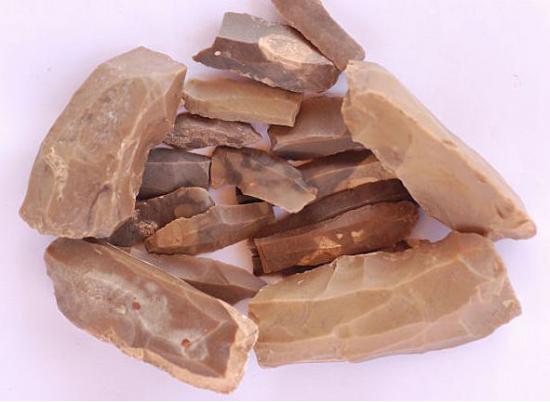 Figure 3. The flint assemblage from the shores of the Küçükçekmece Gölü near Istanbul. 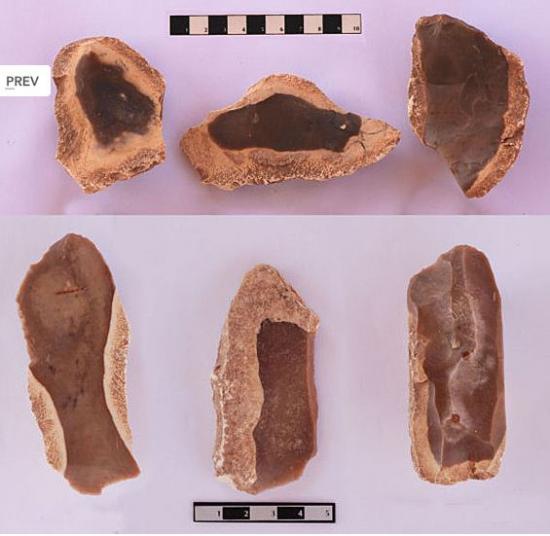 The most important finds from the 2007 season were Neolithic flint tools recovered from the western side of the lagoon, as well as from a limited area east of the current mouth of the Eskinoz river. Here at the foot of a little peninsula protruding into the lagoon, a small tributary stream spills into the bay. The collection consists of a uniform assemblage of local Eocene yellowish flints (Figure 3) consisting mostly of finished tools, mainly long-narrow blades and knives. But there are also large pressure flakes with remains of cortex (Figure 4), demonstrating that pressure technology and tool working were taking place here too. Exceptional for this part of Turkey are three characteristic naviform cores (Figure 5) as well as other pointed tools (Figure 6) diagnostic of the later Pre-Pottery Neolithic B (PPNB) in central and western Anatolia (Conolly 1999; Özdogan & Basgelen 1999 & 2007). For the Istanbul province, and for Southeast Europe, these are the first findings of this kind. Sites yielding conceivably comparable flint tool collections are Keçiçayiri and perhaps Kalkanli in the Eskisehir province (Efe 2005; 2007; see also http://www.kulluoba.org), as well as Çalca, Çanakkale province (Özdogan & Gatsov 1998; Özdogan 2005). All are from the Asiatic side of the Marmara Sea, some hundred kilometres away. They are conventionally dated to the beginnings or first half of the seventh millennium BC. 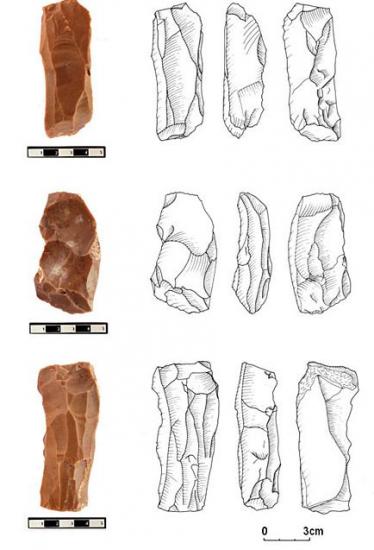 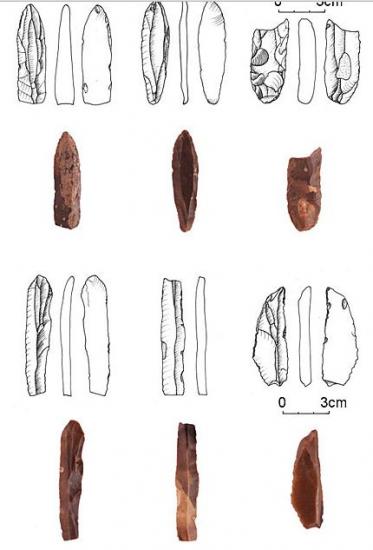 Figure 6. Pointed tools and blades.
A proposed excavation in this part of the lagoon shores should establish whether these diagnostic PPNB flint tools come from settlement sites whose inhabitants had already moved towards farming and animal husbandry. It is also possible to imagine hunting and gathering camps, taking into consideration the special sea- and freshwater environment. If the first hypothesis can be substantiated, Küçükçekmece Gölü may become one of the earliest examples of a Neolithic site ever recorded in Europe, pushing the date of the arrival of the Neolithic economy, lifestyle and culture in Europe further back in time.