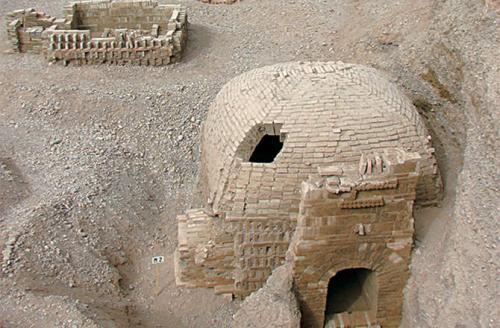 Chinese archaeologists with the Xinjiang Institute of Cultural Relics and Archaeology working in northwest China have found tombs among the remains of an ancient cemetery in the city of Kucha—once one of the points along the infamous Silk Road—a route between China, the Middle East, India and the Roman Empire. They published their findings first in the Chinese language journal Wenwu and then recently in English in Chinese Cultural Relics.

The research team found ten dome-shaped tombs in the cemetery, seven of which were large and made out of brick and adorned with what they are describing as mythical carvings of animals that represented among other things, the four seasons and creatures with heavenly connections. The cemetery was actually discovered in the summer of 2007, but it wasn't until very recently that excavations led to finding the tombs with the prominent carvings. 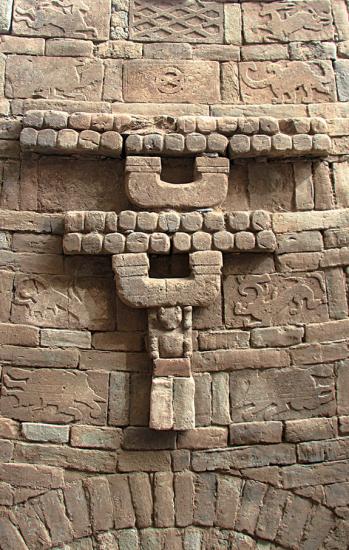 A screen wall of tomb M3 contains carvings that depict a variety of mythical creatures. Heavenly deer are shown at both top right and top left, while at bottom left and bottom right are mythical animals called Xie Zhi. In between the deer and the Xie Zhi, there are carvings that depict the Vermilion Bird of the South (on left, second from top), the White Tiger of the West (on left, second from bottom), the Black Turtle of the North (at right, second from top) and the Azure Dragon of the East (at right, second from bottom). The dragon, bird, black turtle and white tiger are creatures that represent different seasons and parts of the heavens. Credit: Discovery

Sadly, historians still haven't been able to figure out who the people were that were buried in the cemetery—it was ransacked many times over the years, which apparently led to the loss of crucial evidence. The tombs, the researchers have found, were used multiple times over a long period, with many unidentifiable bodies (skeletons) lying in state in all of them—one held the remains of ten people. They believe the tombs were originally built approximately 1,700 years ago, which would have meant the city (previously known as Qiuci, was one of the largest in the area at the time) was part of a network meant to defend the Buddhist kingdom against invaders from the west. They also believe that those interred in the tombs were likely rich or powerful—other remains in the cemetery not inside of tombs likely represent others not so well positioned.

Each of the larger tombs has several rooms inside: an entrance, a passageway, a main burial chamber and a side chamber. The researchers believe that the mythical creatures adorning one of the tombs represent symbols of a type of zodiac used at the time to help trace the path of the moon and sun across the sky and to keep track of the seasons. The team is hopeful that further study of the carvings will reveal more about the culture of the people that constructed the tombs.