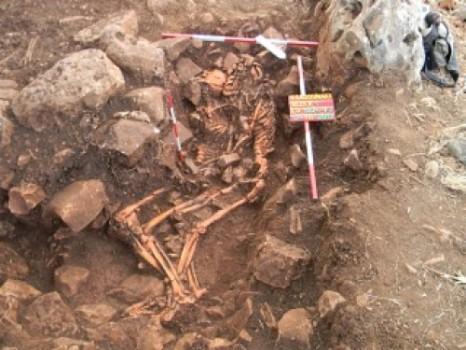 Almost 6,000 years ago, the man was placed behind the woman with his arms around her body, and their legs were intertwined. They were buried.

Why they were interred in this manner is not yet determined, but the international team that discovered them in Greece is still searching for answers, according to team member Michael Galaty, a Mississippi State University archaeologist.

"There've only been a couple of prehistoric examples of this behavior around the world, but even when couples are buried together, they're beside each other and not typically touching," he said. "This couple was actually spooning. We assume they were partners of some kind, and because of DNA analysis, we do know they are male and female." Not only does Galaty head MSU's anthropology and Middle Eastern cultures department, but he also serves as interim director of the university's Cobb Institute of Archeology.

Another question for the researchers to examine is how the couple died, which happened around 3800 B.C., Galaty said. While archaeologists are unsure whether the man or woman died first, they are sure the couple's times of death are close together.

"This is unique in Greece, and we're analyzing the skeletons and bones to find out more about what was going on, how they died and why they may have been placed there," he said.

The location of the couple's burial site -- Ksagounaki, a rocky promontory, or cliff, on Diros Bay near Greece's Mediterranean coast -- is adjacent to Alepotrypa Cave, one of the largest ancient settlements yet discovered in southern Europe, Galaty said. The cave, first explored in the 1950s, was excavated by Giorgos Papathanassopoulos. It was occupied during the late portion of the Neolithic Age, approximately 5000-3000 B.C. The bodies were discovered at Ksagounaki near a Neolithic house that was dated to the same time as the couple's death around 3800 B.C. The area adjacent to Alepotrypa Cave was discovered in 2011 after the archeological team surveyed the land around the cave.

"The cave was occupied for a limited period of time, around the time when people started farming. People became more sedentary and built houses at a site outside the cave. It became a pretty big village," he said. "People were buried within their homes. Keeping your ancestors close to you was important, and their remains served as a title to the land."

Galaty said one of the team's biggest discoveries was that 2,000 years after the Neolithic Age, the Mycenaeans -- who comprised the human cast in Homer's epic "Iliad" chronicling the Trojan War -- returned to Ksagounaki. They dug into the earlier village-mortuary complex to rebury their dead.

"The bones were gathered somewhere else and brought to this feature around 1200 B.C. The Mycenaeans dug down into the old village and filled the pit they dug with bones," Galaty explained. "There were a lot of wealthy objects -- ivory hair pins, lots of beads, a Mycenaean dagger made of bronze."

He hypothesized that knowledge of Alepotrypa Cave may have been passed down through the civilization's memory of tradition.

"It's not just a coincidence that these people chose to rebury their dead here. There are 2,000 years of memory in this place," Galaty said. "Mycenaeans chose to come here to rebury their dead. They may have come from far away to bury special people. "We're going to look at where they might have lived before they were buried and what kinds of interesting rituals related to death and burial may have been used."

In addition to Galaty, a University of Wisconsin doctoral graduate in anthropology, archaeologists on the team were Anastasia Papathanasiou, with the Ephorate for Speleology and Paleoanthropology in Athens, Greece, and Panagiotis Karkanas, of the American School of Classical Studies in Athens, Greece. Others included William A. Parkinson, with Chicago's Field Museum of Natural History, and Daniel J. Pullen, of Florida State University.

Funding was provided by the Institute for Aegean Prehistory, along with grants from the Archaeological Institute of America's Cotsen Excavation Fund, the National Geographic Society's Committee for Research and Exploration, and the Wenner-Gren Foundation for Anthropological Research's International Collaborative Research Grant program. The Field Museum Women's Board and private donors also supported the archaeologists' work.