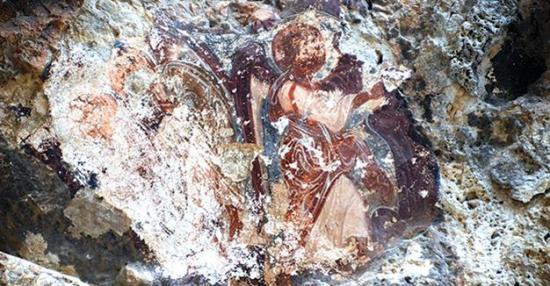 A six-gate rock church that is home to wall paintings featuring Christian icons has been unearthed in the southern province of Burdur’s Bucak district.

The rock church in the ancient city of Kremna was discovered by Mehmet Akif Ersoy University (MAKU) Archaeology Department academic Hüseyin Metin and his team during excavations conducted in a mountainous area in the Avdancık village in Bucak district.

Speaking to members of the press in the church, Metin said they made examinations and found the Byzantine church when villagers told them that they had seen wall paintings in the mountainous field.

The church was discovered as a result of the surveys, he said.

“Surveys have been previously made in the region but the church had not been discovered. It dates back to the 11th and 12th centuries. We did not have much information about the Byzantine settlement in the Pisidia region. The floor of the church has disorganized tesserae [mosaic work] and plaster. There is a grave in its northwestern part. There is a wall in front of a small cave located in its north. The church is covered with wall paintings and what the most important thing is that it is home to mostly damaged icons related to Christianity. The gates of the church have collapsed,” Metin said.

Metin said the aesthetic icons depicted the era of the Komnenos Dynasty as well as the Virgin Mary and the Three Wise Men riding to Jerusalem. He said the wall paintings also featured goat figures. “We believe that they were made by Turkmens in the 11th and 12th centuries. We will examine them in details in the near future.” 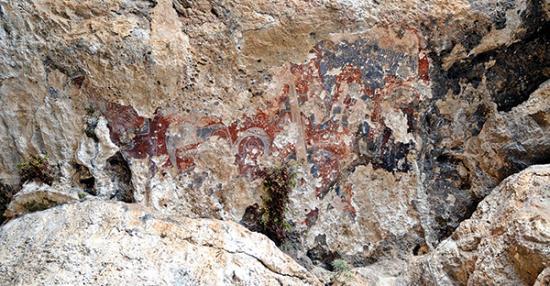 The church, which is the most important discovery during the third season of excavations in and around Kremna, might have been a regional house of worship, said Metin.

“The church is a kind of a first-hand resource on Byzantine culture and social life. Its other important feature is that the icons from the era of the Komnenos Dynasty are very artistic and aesthetic. This discovery will shed light on Byzantine mystery in Pisidia and also become a basic source for professional researchers who are carrying out interdisciplinary work,” he said.

Salih Soslu, a MAKU academic and a team member for the Kremna surveys, said the church had three main scenes. “The first of them features good news to the Virgin Mary; the second one features the Three Wise Men coming to Jerusalem and learning the birth of Jesus the Christ; and the third one features Mary in a mandorla [an almond-shaped area of light].”

“In this sense, the Byzantine rock church will increase the tourism potential of Bucak district and make it a place for faith tourism,” he said. 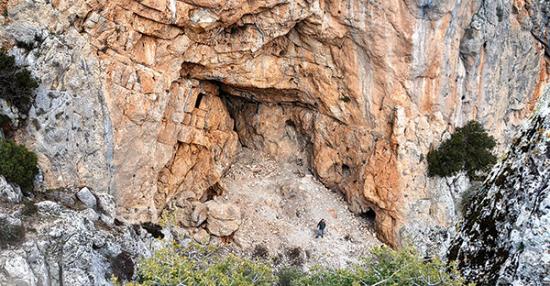