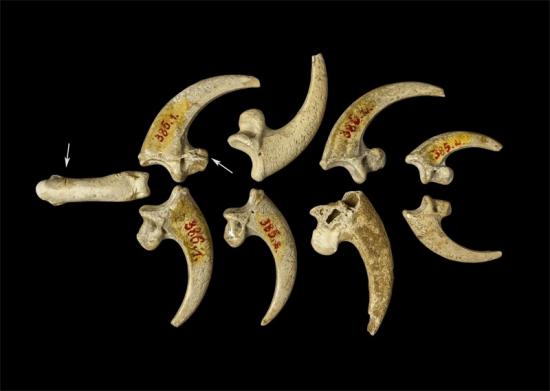 White-tailed eagle talons may be part of a jewellery assemblage.

By perception they had the basics of survival down, but supposedly not much else, until we high-functioning humans came along and developed sophisticated technologies to improve quality of life. However, a discovery that includes a University of Kansas researcher has found that some Neanderthals were more cognitively advanced than we knew. A set of eagle talons found in present-day Croatia dated approximately 130,000 years ago includes several marks and polishing facets that show they were manipulated into a piece of jewelry, said David Frayer, a professor emeritus of anthropology who was part of the study. "Neanderthals are often thought of to be simple-minded mumbling, bumbling, stumbling fools," Frayer said. "But the more we know about them the more sophisticated they've become." 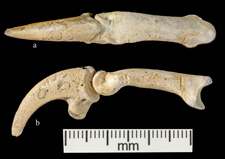 The findings were published in the article "Evidence for Neanderthal Jewelry: Modified White-tailed Eagle Claws at Krapina" this month in the journal PLOS ONE. Co-authors with Frayer include Davorka Radovčić, curator at the Croatian Natural History Museum; Ankica Oros Sršen, of the Institute for Quaternary Paleontology and Geology at the Croatian Academy of Science and Arts; and Jakov Radovčić, of the Department of Geology and Paleontology with the Croatian Natural History Museum.

Frayer said the eight white-tailed eagle bones were discovered more than 100 years ago from a single level at the Krapina Neanderthal site, which was originally excavated between 1899-1905. However, researchers only recently recognized the cut marks on the bones as human manipulations.

"There's just no doubt that they made it, and it was a necklace or bracelet or piece of jewelry," Frayer said.

He said other recent research including the DNA of Neanderthals has opened the door for insight into how Neanderthals were more closely related to us, especially with a discovery that Europeans and Eurasians possessed genes that were unique to Neanderthals.

At the Krapina site, the detailed records from the excavations helped ensure for researchers that the manipulated eagle talons were dated at least 80,000 years earlier than any modern humans entered Europe, so there is no doubt that Neanderthals were solely responsible.

Frayer said beyond showing the Neanderthals had abilities and symbolic capacities to build jewelry, it took an advanced level of prowess to be able to catch three or four eagles to use in the jewelry.

"It really shows a level of technical sophistication, too," he said.

Frayer credited Davorka Radovčić's eyes on the items as a fresh look to make the discovery on the collections from a site in which researchers have worked for decades.

"It's really a stunning discovery. It's one of those things that just appeared out of the blue. It's so unexpected and it's so startling because there's just nothing like it until very recent times to find this kind of jewelry," Frayer said. "It's associated with fossils that people don't like to consider to be human."