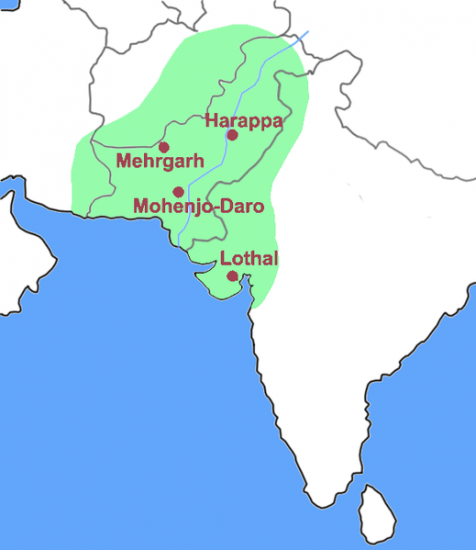 Archaeologists from the city-based Deccan College Post Graduate and Research Institute and the Gujarat State Department of Archaeology, recently excavated an entire settlement belonging to the late mature Harappan period, dating back to 4,000 years, at Kotada-Bhadli, a village located in Nakhatrana taluka of Kutch district in Gujarat.

The researchers said this is the first time they stumbled upon an entire settlement of this period in India, instead of just stray structures that were found in the past. The excavation exposed a residential complex consisting of nine rooms, a fortification wall and a bastion.

Prabodh Shirvalkar of the Deccan College, who headed the excavation along with Y S Rawat, director, Gujarat State Department of Archaeology, said: "This is primarily a rural site of the Harappan civilization. Earlier, bigger urban sites such as Dholavira and Juni Karan have been taken up to study the Harappan civilization. Thus, all of the Harappan history is based on findings belonging to urban Harappan settlements. However, it is important to study the civilization's rural economy as well, without which the urban economy could have never existed."

The find will help researchers understand the late mature phase, which falls between 2,300 BC and 2,100 BC, more clearly. "Not much work has been undertaken on this period. This site belongs exclusively to the late mature phase, which will help us understand this period better. We can also study this phase's paleoclimatic conditions, intra-site settlement pattern and trading networks, among other things," he said. The findings will be used to undertake comparative analysis of the different sites in Kutch, establishing the relationship Kotada-Bhadli shared with them.

The second phase of the excavation, which began in January and concluded in March, had the archaeologists exposing a residential complex with nine rooms. "There are inter-communicating doors within these rooms and the main entrance of the complex is on the Western side. We found a large number of pottery, animal bones and antiquities from these rooms," he said.

The list of antiquities comprises some carnelian, terracotta and steatite beads, one small basalt weight, perforated disc and discs, copper rings, shell bangles, crucibles (pots for copper smelting purposes), and net sinkers made of shell suggesting the existence of fishing activities then. "We also found a copper rod, about 5-cm in length, with a tip wrapped in golden foil. Such a rod has never been found before in all of Harappan civilization. We therefore could not gauge its purpose and have no parallels to compare it with," said Shirvalkar.

He added that a 35-metre open space stretches between the fortification wall and the residential complex. "Previous excavations had large number of structures inside the fortification. Here, on the contrary, the complex takes the central position and is surrounded with open space. This suggests that the residents undertook copper smelting in the open space," he said.

The site falls on the trade route that starts from Dholavira in Gujarat to lower Sindh of Pakistan. "Thus, the village may have been used as a transit point by trade merchants in the past. The open area may have, therefore, been a place for keeping their goods," he said.

A fortification wall and a bastion have also been excavated from the site. "Twelve more bastions - three on each side of the fortification wall - are yet to be excavated. The width of the wall, including the bastion, is 10 metres while the height is 5 metres. Everything is made of stone instead of mud bricks, which suggest that the rural Harappans opted for natural, cheaper and easily available resources," he said.

The researchers are also trying to understand the parameters of the Harappan rural economy, a segment which has hitherto been overlooked. "There have been several instances when smaller Harappan sites have been compared to bigger urban Harappan settlements, which have till now been treated as an archetype for all Harappan settlements. However, comparisons between the two economies - urban and rural - should not be drawn as they both differ considerably. Hence we selected Kotada-Bhadli, in an attempt to define parameters of the rural Harappan way of life," he said.