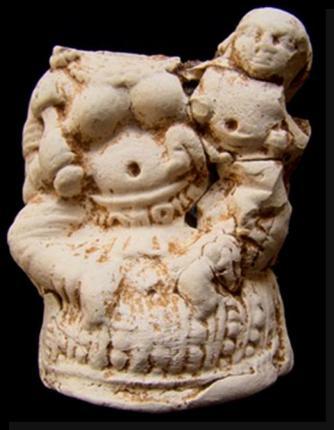 Figurines and necklaces from the Kondapur archaelogical site in Andhra Pradesh. Photo: ASI

Repudiating the earlier assumption that Kondapur in Andhra Pradesh was a Buddhist site, new archaeological evidence indicates that the Satavahana kings, the rulers of the region between 3rd century BCE and 3rd century CE, practised Tantric worship.

“Even though Satavahana kings were under the control of King Ashoka, who embraced Buddhism, they have also patronised Vedic religion,” said G. Maheswari, the Superintending Archaeologist of the Archaeological Survey of India (ASI), Chennai Circle.

The presence of silver and gold-plated coins and terracotta dollars bearing images with close resemblance to Roman Emperor Tiberius also confirmed their trade with the Romans, she said.

“A kaolin (lime and clay) image of a Brahmin, probably the Raja Guru, with a thick sacred thread, embracing the king, goes to show the status enjoyed by Brahmin priests. Presence of ‘pancha mathas’ and images of ‘Lajja Gowri’ clearly proves it is a Tantric cult site, where the goddess of fertility was worshipped,” said Ms Maheswari.

Images of nude women adorned with jewels reiterate the prevalence of worship of the fertility goddess. She said the kings performed ‘yagnas’ and sacrificed animals to propitiate the goddess or seek a male heir. Satavahana Kings were Brahmins and were known as Satakarnis.

The excavations were done in 2009-10 and again in 2010-11, on a sprawling area of 81 acres and an 11-metre-tall mound. G. Yazdani of the erstwhile Department of Archaeology of Hyderabad had come to the conclusion that it was a Buddhist site after collecting evidence of sthupas and other Buddhist structures. “He had concentrated only on the peripheral areas. But excavations inside the mound have disputed his theory,” said Ms Maheswari. 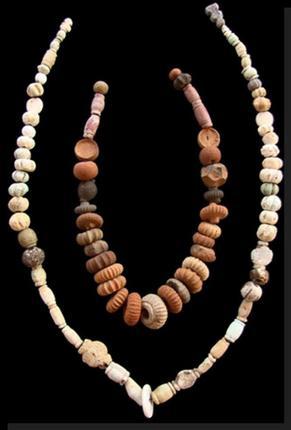 Figurines and necklaces from the Kondapur archaelogical site in Andhra Pradesh. Photo: ASI

A good amount of rice kept in the bowls has also been safely collected and will be sent to a laboratory for a comparative study with present day rice varieties.