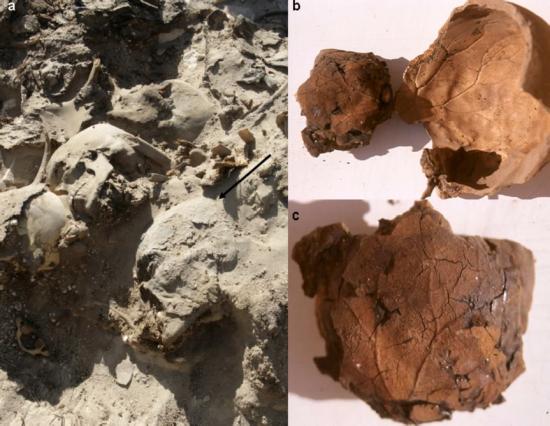 The mummy was recovered in a necropolis in Egypt. Closer examination of the skull reveals preserved prints of the brain vessels. Source: Isidro A. et al., Brain vessels mummification in an individual of ancient Egypt, 2014, DOI: 10.1016/j.cortex.2014.09.005

An ancient Egyptian mummy is sparking new questions among archaeologists, because it has one very rare feature: The blood vessels surrounding the mummy's brain left imprints on the inside of the skull.

The researchers are trying to find what process could have led to the preservation of these extremely fragile structures.

The mummified body is that of a man who probably lived more than 2,000 years ago, sometime between the Late Period and the Ptolemaic Period (550 – 150 B.C.) of Egyptian history, the researchers said.

This is the oldest case of mummified vascular prints" that has been found, study co-author Dr. Albert Isidro told Live Science in an email.

The mummy was recovered in 2010, along with more than 50 others in the Kom al-Ahmar/Sharuna necropolis in Egypt.

But unlike his neighbors in the field, the inside of this man's skull bore the imprints of his brain vessels, with "exquisite anatomical details," for centuries. The prints were cast into the layer of the preservative substances used during the mummification process to coat the inside of the skull.

The imprints appear to have been made by the blood vessels within the meninges, which is the membrane that covers the brain, the researchers said.

"It is a truly remarkable finding and an interesting case," the researchers wrote in their report on the mummy, published Sept. 19 inthe journal Cortex. To date, there have been only a few anecdotal reports of similar cases, they said.

The mummy, dubbed W19, was preserved using substances such as bitumen (a viscous oil) mixed with linen, the researchers found. The imprints of the vessels on the skull bone mirrored the prints on the mass of preservatives found within the skull, the researchers said. It was most likely a brain vessel called the middle meningeal artery that created the imprint, they said.

It is even possible that part of the man's actual meninges still remain there, in the outermost layer of the preservative mass, Isidro said. But the only way to know for sure would be to rehydrate the tissue and look for microscopic signs of the cells, he said.

During the mummification process that the Egyptians followed, the brain was removed, usually through the nose using wirelike instruments, and then the inside of the skull was cleaned and filled with preservative substances. It's unexpected for any brain tissue to remain intact after these procedures, Isidro said.

In this man, something peculiar must have happened when his body was being mummified, the researchers said.

"The conditions in this case must have been quite extraordinary," the researchers said. "We can speculate that something special happened in individual W19 just at the moment of bitumen insertion" into the skull.

But the researchers said they don't know what exactly happened. One possibility is that the general conditions, such as the temperature or the acidity, of the preservative, were different for W19 than for the other people whose mummies were found in the same necropolis, Isidro said.

Although brain tissue is rarely found in artificial mummies who undergo brain extraction, it has been discovered frequently in natural mummies who were preserved in just the right environment. For example, Europe's oldest mummy, Ötzi the Iceman, had some brain tissue preserved, which revealed information about the circumstances of his death.