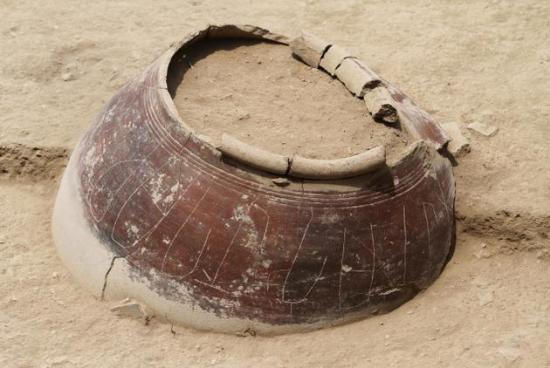 One of the two cist burial sites excavated at Kodumanal in Erode district. Photo: K. Ananthan 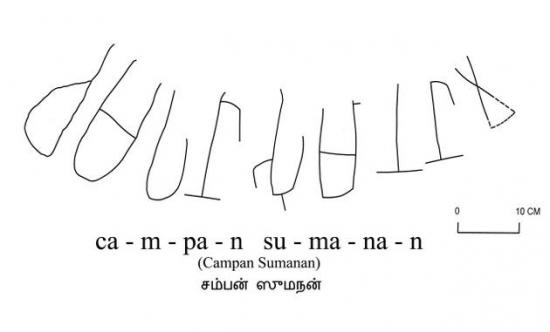 "This is the transcript of the Tamil-Brahmi script reading "Samban Sumanan" that has been found on a big pot in the archaeological excavation at Kodumanal village. Photo: K. Rajan 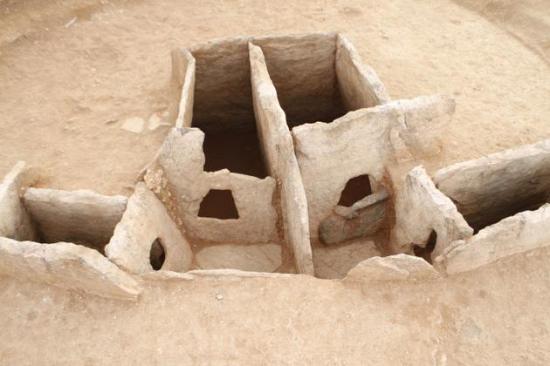 Renewed archaeological excavation in the village in April and May this year by the Department of History, Pondicherry University, has yielded a bonanza again. The artefacts unearthed from four trenches in the habitational mound have revealed an industrial complex that existed around fourth century BCE. The industries in the complex made iron and steel, textiles, bangles out of conch-shells and thousands of exquisite beads from semi-precious stones such as sapphire, beryl, quartz, lapis-lazuli, agate, onyx, carnelian and black-cat eye, and ivory.

K. Rajan, Professor of History, Pondicherry University, who was director of excavation at Kodumanal, said: “Nowhere else do we come across such an industrial complex. The uniqueness of Kodumanal is that it was entirely an industrial site with a minimum agricultural activity. Though several Tamil Sangam age sites such as Korkai, Poompuhar, Karur, Uraiyur, Azhagankulam and Porunthal have been excavated so far, none has yielded so much of Tamil-Brahmi-inscribed potsherds as Kodumanal.”

He estimated that these inscriptions, especially the ‘Samban Sumanan' script, belonged to the third century and second century BCE.

While the big pot with ‘Samban Sumanan' was found at the second level of one of the four trenches, the first level yielded a pot with the Tamil-Brahmi word ‘Samban.' Several potsherds had either the name ‘Samban' or ‘Sumanan.' Obviously, ‘Samban' was the father and ‘Sumanan' the son. The industrial complex could have belonged to Samban's family, Mr. Rajan said.

Dr. Rajan and his team also excavated two megalithic graves this season at Kodumanal, which revealed cist-burials. The first grave has a cairn circle (rocks placed in the form of a circle) on the surface, entombing a double cist below. The cists are box-like structures of granite slabs; these chambers have granite slabs as roofs. The first grave has an outer circle of stone slabs planted vertically in the earth. Some of these stone slabs were actually tall meinheirs, which have been destroyed. The inner circle is a wall-like structure. Below are two cists with trapezium-shaped port-holes scooped out of their front slabs. The two cists have a common passage. The cists contained disintegrated human bones. The funerary objects found inside are a four-legged jar, ring stand, dish-on-stand, iron objects and etched or plain carnelian beads. Broken pots and bowls lay outside the cists.

The second grave has a main cist, and two subsidiary cists. Each has a capstone roof. While the main cist was of a transepted variety, the others, erected on either side of the main cist, were simple ones. There was a cairn-circle on top to mark the graves below, but the stones are no longer there. Interestingly, one of the cists, facing south, has a port-hole in the shape of a key-hole. The other two cists have circular and trapezium-shaped portholes. Inside the cists were button and barrel-shaped carnelian beads and smoky quartz beads.

“Wherever there are a main cist and subsidiary cists, the south-facing cist will always have a port-hole looking like a key-hole. Inside the chamber of the key-holed cist, there will always be a bunch of arrow-heads. We do not know why,” Dr. Rajan said. True enough, there were arrow-heads in this cist.

What is remarkable about the industrial complex is that it has a water-channel in it. Water was used for wetting quartz, agate, lapis-lazuli, sapphire and beryl before they were cut and made into tiny beads with holes. Sapphire came from Sivanmalai and Perumalmalai, beryl from Padiyur and iron ore from Chennimalai, all located within 15 km from Kodumanal. A quartz mine exits five km from Kodumanal. While carnelian and agate came from Maharashtra, lapis-lazuli came from Afghanistan. “Kodumanal lies on the ancient trade route that connects the Chera capital of Karur [Vanji] in the east with the famous Chera port of Muciri (the present day Pattnam in Kerala where excavation is under way) in the west. Roman coins in hoards and singles have been found in several sites in this region. Beads made at Kodumanal were exported,” Dr. Rajan said.

Dr. Rajan said: “Kodumanal is one of the major horizontal excavations done so far in Tamil Nadu. It is one of the sites in India where the highest number of inscribed potsherds have been found. The highest number of graves was opened here. The presence of pit-burial with skeletons in different postures, urn burials and chamber tombs of different types suggests that multi-ethnic groups lived at Kodumanal. The availability of Prakrit words such as ‘Tissan' and ‘Visaki' in Tamil-Brahmi scripts suggests that this industrial-cum-trade centre had cultural and trade contacts with northern parts of India.”