Until the jet age, human survival in the unforgiving climate of the Gulf of Alaska’s islands was a matter of what sustenance could be drawn from the sea. Ongoing research into petroglyphs found on Kodiak Island’s rocky shores is adding to understanding of a fascinating whaling culture that was deeply spiritual, artistic—and practiced mummification.

The Alutiiq tribe’s way of life is being explored by a team of frontier scientists who have been documenting native settlements on the Gulf of Alaska, including hundreds of petroglyphs carved into the shore rocks—among them, many images of whales.
VIDEO = http://www.youtube.com/watch?v=IlZxIoUSfsI

The carvings fall into three sorts, human faces, animals, and geographic designs. On rocks a bit inland from the shore are dozens of faces reminiscent of Matisse, many including holes depicting labrets--large lip plugs that were pierced on both sides of the face below the mouth. 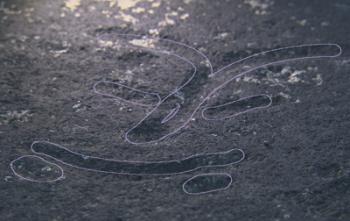 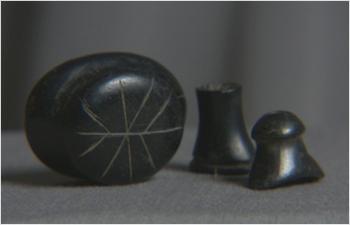 On rocks near the ocean, carvings of whales are found. “Whalers were essentially loner shamans,” explains Harvard-educated archaeologist Sven Haakanson, himself an Alutiiq person and lifelong Kodiak resident with deep appreciation for the artistry of the glyphs. “They were solitary, considered very spiritual. They worked alone, except perhaps when training an apprentice, and were probably a bit feared, because of the power and knowledge they had.”

Part of their special status came from the unique hunting practices they developed.

Alutiiq whalers used lances tipped with sharp stone points coated with poison to take their prey. To keep the poison—derived from plants that still grow on Kodiak—from washing off in the sea, a strong adhesive was needed, namely fat. Sven says this need was behind the Alutiiq practice of mummifying gifted hunters following their deaths. “A whaler needed the fat of a powerful dead person, not just anyone, because they believed incorporating the spiritual essence of that person into their hunting gear enhanced its power. So if you were a great hunter, you were honored by being mummified.”

The shaman-whalers used fat harvested from these mummies to coat their spear tips and enhance their chances of success.

It was dangerous work, according to Sven. “If you cut yourself while readying your lance and the poison got in there, it would kill you in about a minute.” Chasing a whale across the bay, alone, in a single-man boat was no picnic either. With luck, a hunter would strike the whale in the fluke or tail, delivering the poison which began to do its work. Then the whaler would lay a long line of mummy fat across the mouth of the bay, to create a spiritual barrier that kept the whale from fleeing to open ocean.

Next, the shaman-hunter would return to shore for a fast of three days, the time it usually took for a paralyzed whale to drown, surface and be brought in on the currents.

“Our best interpretation of the whale petroglyphs at Cape Alitak is that they were both a good luck charm that would bring the whales in, and a gesture of thanks for giving sustenance to the community.”

Such mysteries are the stuff of frontier archaeologists. Sven’s ground-breaking research—his work was acknowledged with a MacArthur Foundation “genius” grant in 2007—is continuing this summer at Cape Alitak.