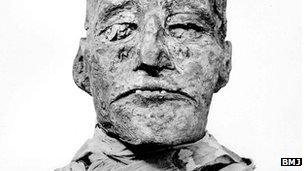 The first CT scans to examine the king's mummy reveal a cut to the neck deep enough to be fatal.

The secret has been hidden for centuries by the bandages covering the mummy's throat that could not be removed for preservation's sake.

The work may end at least one of the controversies surrounding his death.

Precisely how he died has been hotly debated by historians.

Ancient documents including the Judicial Papyrus of Turin say that in 1155BC members of his harem attempted to kill him as part of a palace coup.

But it is less clear whether the assassination was successful. Some say it was, while other accounts at the time imply the second Pharaoh of the 20th dynasty survived the attack, at least for a short while.

The Judicial Papyrus tells of four separate trials and lists the punishments dished out to those involved in the plot, which included one of the king's two known wives, called Tiye, and her son Prince Pentawere - potential heir to the throne.

It says Pentawere, the only one of Ramesses III many sons to revolt against him, was involved in the conspiracy, found guilty at trial and then took his own life.

To find out more, Dr Albert Zink, a paleopathologist at the Institute for Mummies and the Iceman in Italy, and colleagues set out to examine the mummy of Ramesses III and the unidentified remains of another body found in a royal tomb near the Valley of the Kings in Egypt that was believed to be the king's son Pentawere.

Working out of the Egyptian Museum in Cairo where the bodies are now housed, the team ran some CT scans and DNA tests on the mummies.

Scans of Ramesses III revealed a deep, 2.7in (7cm) wide wound to the throat just under the larynx, which the medical scientists say was probably caused by a sharp blade and could have caused immediate death.

Dr Zink said: "Before now we knew more or less nothing about the destiny of Ramesses III. People had examined his body before and had done radiographs but they didn't notice any trauma. They did not have access to the CT scans that we do. 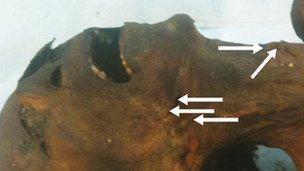 "We were very surprised by what we found. We still cannot be sure that the cut killed him, but we think it did.

"It might have been made by the embalmers but this is very unlikely. I'm not aware of any other examples of this."

They could see a Horus eye amulet embedded in the wound - a charm most probably inserted by the ancient Egyptian embalmers during the mummification process to promote healing.

The DNA tests showed that the unidentified body of the young man, who was aged about 18 when he died, was a blood relative of Ramesses III, and in all probability the king's son Pentawere.

Dr Zink said: "From our genetic analysis we could really prove the two were closely related. They share the same Y chromosome and 50% of their genetic material, which is typical of a father-son relationship."

When they examined the body of the young man, they found he had unusual compressed skin folds and wrinkles around his neck as well as an inflated chest.

Although these changes might have occurred post-mortem in the mummy, it could indicate that the man was strangled to death, says Dr Zink.

The body was not mummified in the usual way - and was covered with a "ritually impure" goatskin - which might have been an ancient punishment in the form of a non-royal burial procedure.

"He was badly treated for a mummy," said Dr Zink.