Kibyra (Turquie):Medusa to gaze once more from mosaic

A mosaic of Medusa, the terrible creature of Greek mythology who turned all those who looked her to stone, is being restored in the southern province of Burdur 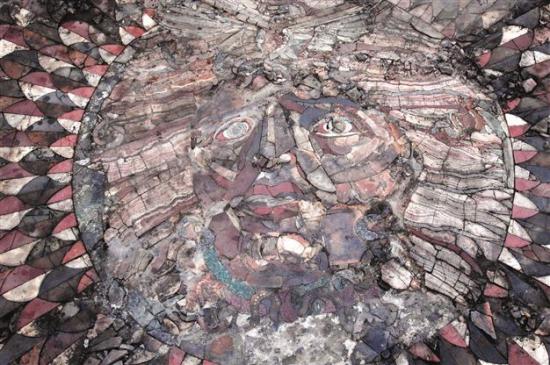 She may no longer turn people into stone, but Medusa continues to arrest onlookers; now, even more people will have a chance to glimpse at mythology’s most famous gorgon with completion nearing on the restoration of a mosaic at the ancient city of Kibyra in southern Turkey.

The mosaic of Medusa, the female mythological creature with snake hair and sharp teeth who turned all that gazed upon her to stone, was discovered in 2009 in Kibyra in the southern province of Burdur’s Gölhisar district. About 95 percent of the mosaic remains despite being around 1,800 years old.

Düzgün Tarkan, an academic from Mehmet Akif Ersoy University Archaeology Department, who is member of the archaeology team in the region, said the Medusa mosaic covered the orchestra ground of a 3,600-person capacity Odeon structure in the ancient city.

He said the mosaic had been covered upon advice from Culture and Tourism Ministry experts so as to protect the artifact from winter conditions.

“This year, after getting the necessary allocation from the ministry, we decided to work on the mosaic so as not to lose more time,” Tarkan said, adding that an Istanbul-based company had been working on the restoration of the mosaic for two months, with one month remaining.

He said they believed that the mosaic had suffered from a large fire in the ancient era. “In its original, it was covered with a wooden roof. This is why we believe that the timbers that fell during the fire burned the mosaic for days. The marble pieces that form the mosaic received great damage. Now we are merging them and the broken pieces are being attached to the mosaic.”

The mosaic was built as a protection mechanism, as many believed that even the face of Medusa could turn one to stone, he said.

“This is the first time we have seen it in Kibyra. It is made of marble and this is why it is different. It is unique in the world in terms of its creation technique,” he said, noting that it was also remarkable that the mosaic had survived in its original location, something that rarely occurs.

“They are generally protected as a few broken pieces. Medusa is in its original place and this is very important for the country’s archaeology and culture,” he said, adding that the mosaic would be surrounded with glass after the restoration and displayed for visitors.

The mosaic is 11 meters in length and its widest part is 4.35 centimeters, according to Tarkan.
Archaeological excavations in Kibyra have been continuing since 2009, unearthing artifacts and relics of historical significance. The city, which was a regional power in the Hellenistic period, was founded in 330 B.C.

In Greek mythology, Medusa was a monster, generally described as having the face of a hideous human female with live venomous snakes in place of hair. Gazing directly upon her would turn onlookers to stone. Most sources describe her as the daughter of Phorcys and Ceto. Medusa was beheaded by the hero Perseus, who used her head as a weapon until he gave it to the goddess Athena to place on her shield. In classical antiquity, the image of the head of Medusa appeared in a device that fends off evil known as the Gorgoneion.