It could be the first direct evidence of early humans adapting to climate change, say researchers after examining architectural, ceramic remains 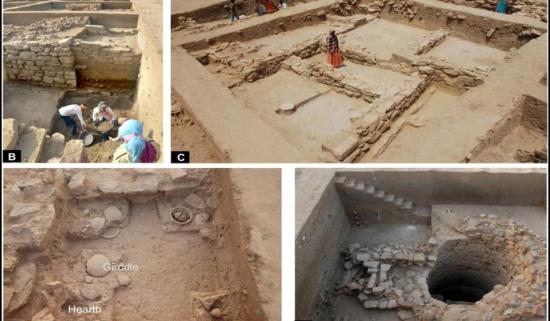 An archaeological site at Khirsara, Gujarat, where the study was conducted.

A shift in the cropping pattern to cope with a deteriorating monsoon during the mature phase of the Harappan civilisation could be the first direct evidence of early humans adapting to climate change, a new study suggests.

An analysis of micro-botanical remains and carbon isotopes of soil organic matter at an archaeological site at Khirsara, Gujarat, led by the Birla Sahni Institute of Paleobotany (BSIP), Lucknow, has revealed that widespread drought in the northern hemisphere around 4,200 years ago – around 2200 BC – forced inhabitants of the region to replace barley and wheat, which need a lot of water, with drought-resistant millets.

This transition, however, led to the decline in their prosperity, going by architectural and ceramic remains at Khirsara site, which was on the trade route to Sindh, researchers said.

“A major aspect of human resilience is water and food,” Rajesh Agnihotri, co-author of the study, told HT. “Western Gujarat is a dry region that receives rainfall only for 16 or 17 days in a year and today thrives mainly on millet-based crops. However, the regional subsistence was not the same in the past.”

“This work is the first direct evidence of human adaptation against climate (monsoonal) change. Right at 4,200 years ago, we found that ancient humans changed their crops to millets such as sorghum, ragi, jowar, bajra,” said Agnihotri. “The fact that barley and wheat, which require a lot of water, were grown indicates the region received good rainfall 4,200 years ago.”

Researchers said the switch to millets that need less water prevented the total collapse of the civilisation even after intense drought, unlike other kingdoms.

Well-dated paleo records indicate that around 4,100 years ago, India, Central Asia, Middle East, and Europe, witnessed abrupt and extreme weather changes, resulting in increased aridity. Climatic changes during the period are considered a major factor for the collapse of the old kingdom in Egypt, the Akkadian empire in Mesopotamia, and Bronze Age societies in Italy, Greece and Crete, and northern Algeria.

The Harappans’ economic prosperity slowly declined during the late mature or declining phase (after 4200 years ago), which, researchers said, could have led to the slow demise of the civilisation.

From buildings made of sandstone with mud-mortar and multicoloured mud bricks during the mature phase, sudden arid conditions 4,200 years ago led them to raze the older structures and build smaller ones.

“This effect (of declining prosperity) could also be noticed in the poorer fabric, in the carelessness shown in painting vessels, and in the gradual disappearance of elaborate goblets, beakers, etc.,” the study said.

Commenting on the paper, P Ajithprasad, head of department of archaeology & ancient history, MS University, Baroda, said: Adoption of millets and other drought-resistant crops in the Harappan diet was a socio-cultural process determined by the overall economic production practices of the Kachchh Harappans.”

With many regions in India projected to undergo changes in rainfall pattern and get drier, researchers said policymakers should identify vulnerable regions to expand irrigation networks and alter crop patterns.

“More well-dated and quantified multi-proxy palaeo records from archaeological sites of north-western India, focusing especially on past water-plant relationships, could greatly help in developing pragmatic socio-economic models in the wake of increasing warming, monsoonal dryness, and the change in rainfall patterns,” the study has stated.