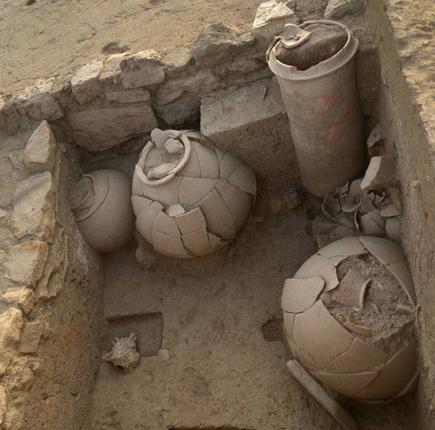 A cluster of pottery, including a tall slender jar, and a big conch shell found in one of the trenches. Photo: D. Krishnan

January 2, 2011 was a golden day in the second season of excavation at Khirsara village, 85 km from Bhuj town, Gujarat. Nearly 30 trenches had been dug that season, each 10 metres by 10 metres. One of them yielded two miniature pots, which a labourer rushed to S. Nandakumar, a site supervisor in his 20s. He took them to Jitendra Nath, Superintending Archaeologist, Excavation Branch, Vadodara, Archaeological Survey of India (ASI). “They are gold beads,” announced Mr. Jitendra Nath after examining them. One of the pots contained 26 disc-shaped beads, micro beads and a ring, all made in gold, and steatite beads.

“Exciting results” from four seasons of excavation with 120 trenches dug at Khirsara from December 2009 have established Khirsara as “a major industrial hub” that belonged to the mature Harappan period. It overlooks the Khari river and flourished for 400 years from circa 2600 to 2200 BCE.

Carbon dating at the Birbal Sahni Institute of Paleobotany, Lucknow, for the botanical remains collected from Khirsara’s trenches falls in the range of 2565 to 2235 BCE.

Khirsara has everything to be called a mature Harappan site: systematic town planning, a citadel complex where the ruling elite lived, a factory complex, habitation annexes, a warehouse, drainage system, and massive fortification walls. All the structures were built of sandstone blocks set in mud mortar. Excavations have yielded 11 bar, circular and square seals, standardised bricks in the ratio of 1:2:4 and a staggering variety of pottery including reserve slip ware. While the bar seals have only the Harappan script, others have carvings of unicorn and hump-less bulls with the Harappan signs.

Mr. Jitendra Nath asserted: “The seals, especially the circular seals, are the main characteristic by which Khirsara can be categorised as a mature Harappan site. Pottery and structures such as the citadel, the factory and the warehouse are the hallmarks by which this site could be said to belong to mature Harappan phase.”

More than 4,200 years ago, Khirsara was an important trading outpost in western Kutch in Gujarat on the way to Sind in present-day Pakistan. Its “factory” manufactured enormous quantities of beads from cornelian, agate, jasper, lapis lazuli, steatite and chalcedony; bangles and inlays from conch shells; copper artefacts such as bangles, rings, beads, knives, needles, fish-hooks, arrowheads and weights; and terracotta rattles, toy-carts and gamesmen. One trench alone threw up 25,000 exquisite beads made of steatite.

R.N. Kumaran, Assistant Archaeologist, ASI, said: “We have found furnaces and a tandoor. There is evidence of copper-working and ash. We have found huge quantities of steatite beads and some seals made of steatite. From all this, we have identified it as a factory site.”

“This is the first time in the Harappan context that we have found separation fortification walls for each complex on the site, and their purpose is to ensure the safety of its residents and the goods manufactured,” said Mr. Jitendra Nath, now Superintending Archaeologist, Mumbai Circle, ASI.

A massive warehouse, measuring 28 metres by 12 metres, excavated had 14 parallel walls, with an average length of 10.8 metres and 1.55 metres breadth. Its superstructure was made of wood and daub. The space between the parallel walls enabled circulation of fresh air to protect the stored goods. Mr. Jitendra Nath said: “It must have been multipurpose warehouse for storing goods for export or those that have been imported. Its proximity with river Khari is to support the maritime trading activities of the Khirsarans. A warehouse is a rare type of structure found in a few Harappan sites. It indicates a state of surplus economy.”

The houses in the citadel, where the elite lived, had verandas, interconnected rooms, floors paved with multicoloured bricks and a rock-cut well. A five-metre paved lane separated the citadel from the factory. The citadel was deliberately built adjacent to the warehouse so that the rulers could keep a watch on the manufacturing and trading activities, said Mr. Kumaran.