After seven seasons at Khirbet Qeiyafa, the team heads to Lachish 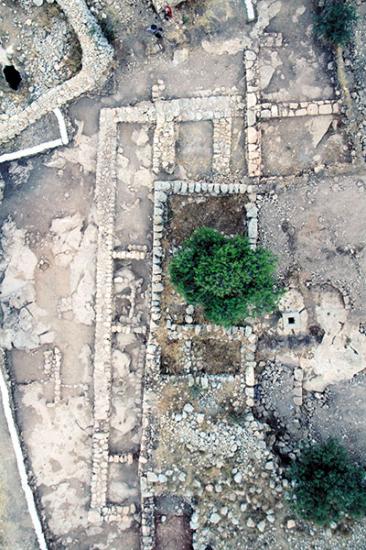 A large administrative building (thick walls) at Khirbet Qeiyafa, dating to the era of King David and the early kingdom of Judah, surrounds a later Byzantine structure (thin walls) at the center of the site. Photo: SkyView.

Seven seasons of excavations at the fortified site of Khirbet Qeiyafa have reshaped our understanding of the early kingdom of Judah. Monumental discoveries from the 2013 season provide new evidence of an extensive civil administration during the time of King David. To continue investigating the tenth-century kingdom of Judah, the Qeiyafa archaeologists are heading to Lachish. In the article “An Ending and a Beginning: Why We’re Leaving Qeiyafa and Going to Lachish” in the November/December 2013 issue of Biblical Archaeology Review, archaeologists Yosef Garfinkel, Michael Hasel and Martin Klingbeil explain how “the results from Khirbet Qeiyafa, together with the results from Lachish, will enable us to obtain a clearer and more complete picture of the early history of the kingdom of Judah in the tenth and ninth centuries B.C.E. We view these two excavations as one regional project.”

Khirbet Qeiyafa is an essentially one-period Iron Age site that has been identified with Biblical Sha’arayim. Sha’arayim, mentioned in the Bible in connection with the David and Goliath narrative, translates to “two gates,” a feature consistent with the unique casemate fortifications at Qeiyafa. BARreaders are familiar with the groundbreaking discoveries at Khirbet Qeiyafa. The five-line Qeiyafa Ostracon is potentially the oldest extant Hebrew inscription and some scholars interpret the text torefer to the birth of the Israelite monarchy. The excavations have also uncovered shrine models and other cultic paraphernalia.
The final 2013 field season uncovered two monumental buildings. The team uncovered a massive structure measuring over 10,000 square feet at the center of the site that “reflects power and authority over the city, as well as the region.” The authors “believe it was an administrative center of the recently established Davidic kingdom.” When the discovery was first announced, it was heralded as King David’s palace in the popular media, and the archaeologists write that while “he lived in his palace at Jerusalem … as the major administrative center on the western edge of David’s kingdom, it could have been a palatial building.”

Garfinkel, Hasel and Klingbeil write: “Khirbet Qeiyafa redefined the debate over the early kingdom of Judah. It is clear now that David’s kingdom extended beyond Jerusalem, that fortified cities existed in strategic geopolitical locations and that there was an extensive civil administration capable of building cities. The inscription indicates that writing and literacy were present and that historical memories could have been documented and preserved for generations.”

After extensive excavations at Khirbet Qeiyafa, the team will continue on to an even more prominent excavation: Tel Lachish. Lachish was the second most important city in the kingdom of Judah, after Jerusalem. While its later destruction was immortalized by Sennacherib’s reliefs at Nineveh, the city has a rich history before the destruction. Three previous teams excavated Lachish over the past 80 years—click here to read a collection of free BAR articles on the Lachish excavations.

Why begin a fourth expedition to Lachish? Khirbet Qeiyafa provided a great deal of information on the early tenth century B.C.E., and understudied strata (Levels IV and V) at Lachish will teach us about the second half of the century. When was Lachish inhabited for the first time in the Iron Age? When was it first fortified? What can it teach us about the economy, administration, international connections, writing and cult of the early kingdom of Judah? Garfinkel, Hasel and Klingbeil present the discoveries at Qeiyafa and agenda for Lachish in “An Ending and a Beginning.” The authors write: “For 2014 on, all are welcome to join this fascinating new project in the most fascinating Biblical city of Lachish.”

BAS Library Members: Read “An Ending and a Beginning: Why We’re Leaving Qeiyafa and Going to Lachish” online as it appears in the November/December 2013 issue of Biblical Archaeology Review.