Via Joseph Lauer, who provides the translation

News – Tens of ancient coins were discovered in the Elah Valley:  Archaeology Doctoral candidate from the Hebrew University uncovered in Khirbet Qeiyafa coins used in the Persian and Hellenistic periods

A wonderful discovery was made at the excavations at Khirbet Qeiyafa in the Elah Valley: at the site were discovered some of the earliest coins ever found in the Land. The discovery was reported by Yoav Farhi, a doctoral candidate from the Hebrew University’s Institute of Archaeology, at the 37th Israel Archaeological Congress that was held on Thursday, [April 14, 2011,] at Bar-Ilan University.   The coins were from the Persian and Hellenistic periods, the fourth and fifth centuries BCE, about a hundred or more years after the return from exile and the building of the (original) Second Temple. The land was under Persian rule until 332-333 BCE, when the area was conquered by Alexander the Great and the Hellenistic period began.

At the site tens of rare coins were found from different periods. However, the most fascinating were the coins from the Persian and early Hellenistic periods. Then coins were first minted in the Land at Jerusalem, Samaria, and Philistia (Gaza, Ashdod and  Ashkelon). At the same time coins brought from elsewhere in the Greek world were also used.    “Coins that were minted in the Land are very rare. All are made of silver and generally are very very small – with a diameter of about 7 mm. and a weight of less than half a gram. However, there are also coins that are slightly larger. But because they are so small they are hardly ever found in organized excavations”, explained Yoav Farhi.

He explained the before this period there were no coins in the Land and that when Abraham bought the Machpela Cave [of the Patriarchs] for 400 silver shekels – he bought it in exchange for pieces of silver and the word “shekel” refers to a unit of weight of about 11.4 grams.  According to Farhi the coins – in the order of tens – were not all found in one place but over three years in all areas of the excavation at the site. Until now there was not found at any excavation site in the Land so many coins of all these types. Only about 10 archaic Greek coins were found in the Land in different places like Jerusalem, Shechem and Atlit – all imported.

A coin from the time of Alexander the Great is the rarest of the coins – one of a kind in the world - a silver covered bronze coin upon which is depicted the figure of a sphinx that was apparently brought from Cyprus. No similar coin of this specific type is known.    On another silver coin - a tetradrachma (four drachmas), that is a relatively large coin, there is displayed on one side the head of the goddess Athena and on the other side a raptor from the owl family and the name of the city of Athens in Greek. This coin served like the dollar - the currency par excellence - in the fourth and fifth centuries BCE throughout the ancient Near East.

Of the earliest and smallest coins struck in Jerusalem is a coin displaying on the obverse the head of the goddess Athena and on the reverse a raptor from the owl family, this time accompanied by the inscription “Yehud”, the name of the province of Judea under Persian rule.

Another coin that was found at the site is from the time of Alexander the Great – also a silver tetradrachma. On one side is seen a head, apparently Alexander’s head, and on the second side the god Zeus seated on a throne. These are relatively large coins, around 25 mm. in diameter and a weight of 17 grams and are most beautiful (compared with the tiny coins of the Persian period whose weight was only half a gram and their diameter about 7 mm.).

The variety of coins that were found in the excavation improves our understanding regarding the monetary situation in Judea and its neighbors during the transition phase between the Persian and Hellenistic periods.    In Khirbet Qeiyafa was revealed a settlement apparently dating back to the tenth century BCE. In the ancient Persian and Hellenistic periods the settlement was of an administrative-military nature.  The excavations at the site are conducted on behalf of the Hebrew University in Jerusalem under the direction of Prof. Yossi Garfinkel and Saar Ganor.

[Pictures and captions (translated) from the Hebrew article.] 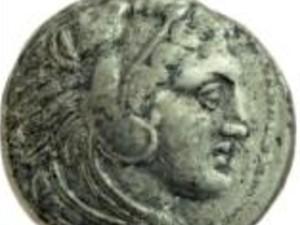 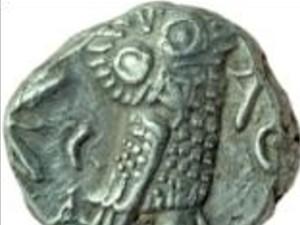 [The coin that was found in the Elah Valley. Picture: Carla Amit] 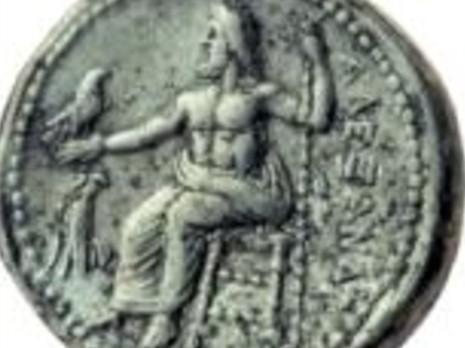