Archaeological claims that King David's palace was discovered may be overstated, prof says 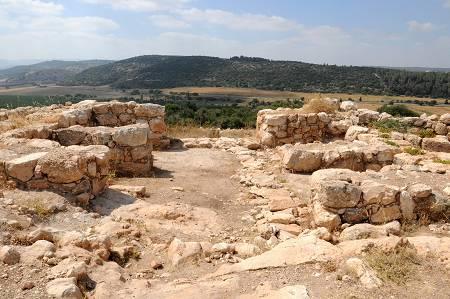 The Israelite period gate, pictured here, provided defense for the city currently identified by the modern name, Khirbet Qeiyafa. Just across the Elah Valley, to the low, is a low, brown mound identified as the biblical city of Socoh. During their showdown with the Israelites (1 Sam. 17) the Bible states that the Philistines camped between Socoh and Azekah.  Photo by Gary D. Myers.

Archaeologists say they have uncovered the remains of King David's palace on the site of the biblical battle between David and Goliath, providing key evidence for understanding the origins of the kingdom of Judah.

Southern Baptist archeology professors cautioned against concluding the remains are David's actual palace, noting that the discovery in the least is a significant part of the Old Testament figure's kingdom.

While one main structure was identified as the palace, a corresponding structure is believed to have been a large storage facility for collecting taxes in the form of agricultural products.

"This is the only site in which organic material was found -- including olive seeds -- that can be carbon-14 dated" to David's era, the Israeli Antiquities Authority, which excavated the site with the Hebrew University of Jerusalem, told the Times of Israel newspaper.

Yossi Garfinkel and Saar Ganor, the leading researchers involved in the dig, said, "This is indisputable proof of the existence of a central authority in Judah during the time of King David."

Until this discovery, no palaces were clearly attributable to the early 10th century B.C., The Jerusalem Post reported July 18. The site, known in modern day as Khirbet Qeiyafa, likely was destroyed in battle against the Philistines in 980 B.C.

Evidence that the city came to an end in a sudden destruction, The Post said, includes hundreds of pottery vessels, stone utensils and metal objects left on the floors of houses.

Steven Ortiz, associate professor of archeology and biblical backgrounds and director of the Charles D. Tandy Institute for Archaeology at Southwestern Baptist Theological Seminary, attended a celebration ceremony at the unveiling of the supposed palace site. 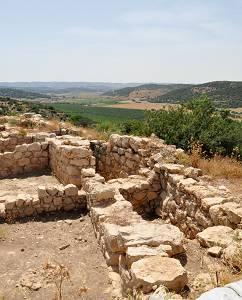 In the foreground are the ancient walls of Khirbet Qeiyafa, in the distance, just right of center, is a low, brown mound identified as the biblical city of Socoh. Located just above the Elah Valley, is the site of current excavations which shed light on early Israel under King David. Near this location, the armies of Israelites and Philistines witnessed the defeat of Goliath by David.  Photo by Gary D. Myers.

"It is an important site for the history of the Israelite monarchy," Ortiz told Baptist Press. "I think Dr. Garfinkel might be overstating the large building. It is indeed a very large building sitting on the acropolis, perfect for a public building. 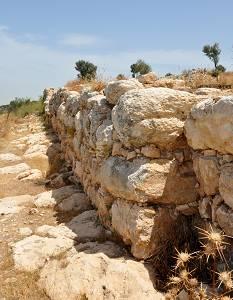 Remains of the massive, stone city wall at Khirbet Qeiyafa illustrates the type of fortifications that were common during the time of David.  Photo by Gary D. Myers.

"The site dates to the time of the Davidic monarchy. It is a bit of a stretch to say that it is David's palace," Ortiz said. "If David built a palace it would be in Jerusalem, as the biblical text implies, not in an outlying fortress city. It is best to state that Khirbet Qeiyafa was perhaps a city under the hegemony of the developing Davidic monarchy."

A second Israelite gate at Khirbet Qeiyafa provides an excellent view of the ancient site identified as Azekah (the highest hill in the background). During their showdown with the Israelites (1 Sam. 17) the Bible states that the Philistines camped between Socoh and Azekah.  Photo by Gary D. Myers.

The site, known in the Bible as Shaarayim, is located about 18 miles southwest of Jerusalem, on the summit of a hill that borders the Elah Valley on the north, The Post said. Observers indicate it would have been a key strategic location in the kingdom of Judah.

Dan Warner, associate professor of Old Testament and archaeology at New Orleans Baptist Theological Seminary, told Baptist Press the excavation "has certainly set off some excitement in the archaeological community, and Professor Yossi Garfinkel's inferences have not been silenced."

"Garfinkel claims to have found a major Israelite settlement from the time of David, clearly suggesting that the Davidic kingdom was real and not fictitious as many liberal scholars claim," Warner said.

The discovery, he said, has "added a major building peg in the construction of a Davidic kingdom as the Bible states."

Warner noted some significant finds from the excavation.

"For one, is an inscription believed to be not Canaanite but early Hebrew. In fact, [Garfinkel] claims it is the earliest Hebrew inscription found anywhere to date," Warner said.

The pottery and structures found at the site date to the Davidic and Solomonic period, Warner said, and the absence of pig bones at the site serves as a key indicator of Israelite occupation.

Stephen J. Andrews, a professor of Old Testament, Hebrew and archaeology at Midwestern Baptist Theological Seminary, told Baptist Press the discovery contradicts the views of some assert that if David and Solomon even existed, they were only tribal chieftains who left no lasting impact.

“There will be debate within the archaeological community on the exact function of the buildings and on their connection with David and his kingdom. But given the evidence of Qeiyafa's well planned fortified city and the carbon-14 dating pointing to the early Iron II period, “ Andrews said, “it will be difficult to deny the existence of a central authority that deliberately built a fortified administrative center there, and, possibly other unexcavated Judean levels at other sites.”

Because of the significance of the discovery, the Israel Antiquities Authority collaborated with the National Parks Authority in Israel to reject a proposal to build a new neighborhood close to the site, declaring the area and its surroundings a national park, The Post reported.