Very rare find from this period in this area may shed light on Jewish communities in the north before and after the destruction of the Second Temple. 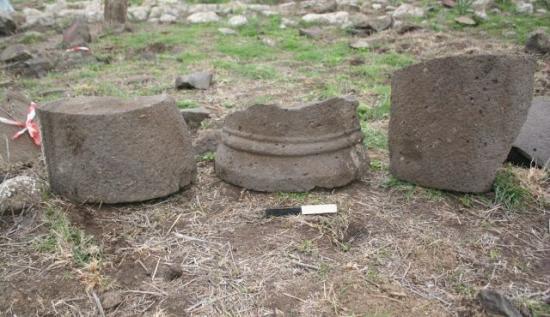 Remains of what is thought to be a synagogue found in the Golan Heights. Photo by Dr. Michael Osband

An archaeological dig on the Golan Heights has uncovered a Roman-era structure that probably served as a synagogue. This very rare find from this period in this area may shed light on Jewish communities in the north before and after the destruction of the Second Temple.

The structure was found in Khirbet Majdouliya in the central section of the Golan, during a dig conducted by a team from the Archaeological Institute of Bar Ilan University, headed by Dr Michael Osband. The dig commenced after a prolonged multi-year survey conducted by the institute in the Golan area. During the initial survey Osband discovered what was suspected to be a stone bench within a large structure.

Subsequently, he started digging around the structure a month and a half ago. Usually, digs are conducted during the summer but in this case the copious rains helped in softening the earth and uncovering the findings.

A large public structure was uncovered, built of hewn stones. It contained two parallel rows of stone benches along its walls. Remnants of columns were also found, as well as many pottery shards. The researchers are cautious in labelling the structure a synagogue, but so far there is no alternative suggestion. “This is a monumental public building in a village located in a Jewish area – we don’t know of any other purpose for such a building except a synagogue” says Osband. 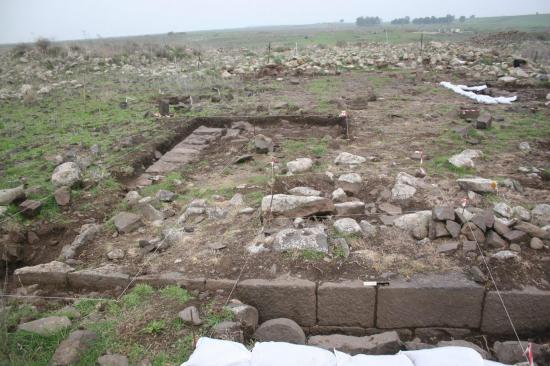 A unique aspect of Khirbet Majdouliya is that it has no Byzantine-era layer, in contrast to other adjacent sites. Most Roman-era settlements in the Golan and elsewhere in Israel continued to thrive well into the Byzantine period. This makes it harder for researchers to distinguish between layers and definitively identify Roman-era structures. A debate has developed over the last decade among archaeologists and historians regarding the existence of Roman-era synagogues in northern Israel. Several researchers proposed that synagogues arose in the Galilee only in the fourth and fifth centuries, towards the end of the Byzantine period.

In this case, a synagogue has been found at a site that for some reason was abandoned at the end of the Roman period (at the end of the third or beginning of the fourth century CE). In this lies its significance. “This structure, as well as a synagogue that was found in Wadi Hamam near Migdal, supports the line of thinking that suggests that the later synagogues had earlier precursors”, says Prof. David Adan-Bayewitz, who heads Bar Ilan’s Institute of Archaeology.  “It should be noted that this was a village in the eastern Golan, on the periphery of the Galilee, suggesting that there were others like it.”