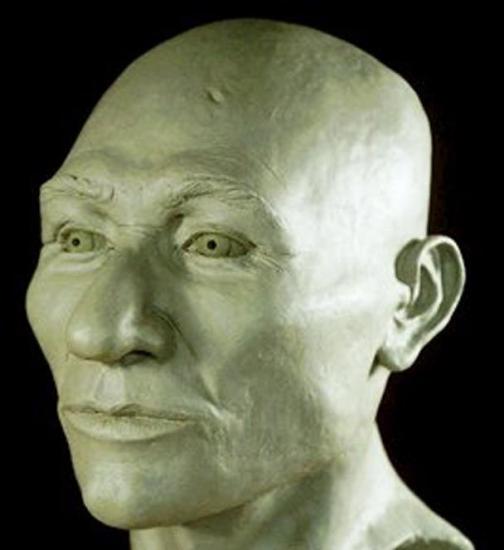 A clay model of Kennewick Man that was made from the skull. ELAINE THOMPSON MARTHAROSENBERRY / AP

The skeleton, more than 9,500 years old, has long been at the center of a rift between tribal members and scientists, led by Doug Owsley, a physical anthropologist at the Smithsonian Institution's National Museum of Natural History who spearheaded the legal challenge to gain access to the skeleton for scientific study.

Owsley says study shows that not only wasn't Kennewick Man Indian, he wasn't even from the Columbia Valley, which was inhabited by prehistoric Plateau tribes.

Tribal leaders who fought for reburial of the remains invited Owsley to meet with them this week to present the scientific findings to date.

After nine years of legal battles, the 9th U.S. Circuit Court of Appeals in 2004 ruled that the remains discovered in 1996, eroded from a bank of the Columbia River, were not protected by the federal Native American Graves Protection and Repatriation Act (NAGPRA), because the bones were so old that it was impossible to establish a link with modern-day Native Americans.

Owsley spent most of the day presenting his findings from the study of the skeleton, one of the most complete sets of remains ever recovered, for the gathering hosted by Central Washington University. 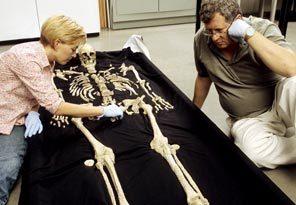 Smithsonian physical anthropologists Karin Bruwelheide and Douglas Owsley discuss the positioning of the Kennewick Man skeleton during the anatomical layout of the remains. CHIP CLARK / SMITHSONIAN'S NATIONAL MUSEUM OF

While Owsley has said in the past that Kennewick Man is not of Native-American descent, he said here for the first time that he believed the man was not even from this area.

Isotopes in the bones told scientists Kennewick Man was a hunter of marine mammals, such as seals, Owsley said. "They are not what you would expect for someone from the Columbia Valley," he said. "You would have to eat salmon 24 hours a day and you would not reach these values.

"This is a man from the coast, not a man from here. I think he is a coastal man."

Rex Buck, leader of the Wanapum people, told Owsley he appreciated the presentation, but that lamprey eel could provide the same types of marine-mammal nutrients that Owsley noted. "I hope you would think about some of these things, too, and add that to your equation."

Pressed by Armand Minthorn of the Umatilla Board of Trustees, who asked Owsley directly, "Is Kennewick Man Native American?" Owsley said no. "There is not any clear genetic relationship to Native American peoples," Owsley said. "I do not look at him as Native American ... I can't see any kind of continuity. He is a representative of a very different people."

His skull, Owsley said, was most similar to an Asian Coastal people whose characteristics are shared with people, later, of Polynesian descent.

And, while tribes want the remains returned for reburial, Owsley said there is still much more to learn from the skeleton, which has largely been inaccessible but for two instances, in which a team of about 15 scientists could study it for a total of about two weeks.

Tribal members listened for hours to Owsley's highly detailed presentation, but it did not budge their conviction that Kennewick Man is a part of their people's past — and needs to be reburied.

The remains of Kennewick Man reside at the Burke Museum of Natural History and Culture in Seattle. Tribal members make regular visits to the museum to pay their respects and offer songs and ceremony to the Ancient One, as he is called in tribal communities. Minthorn said reburial still needs to happen, and that the law should be changed to give tribes better control of sacred remains.

"That is the only way we will get him back," said Minthorn, who added that tribes are waiting until after the election to continue their push to get the Native American Graves Protection and Repatriation Act changed in Congress, so tribes can press for return of the skeleton.

"Today just adds to getting the Kennewick Man back," he told Owsley. "That is our goal and that is going to be our effort. It would be great if you could help. If you don't that is OK, too."

Ruth Jim, a member of the Yakama Tribal Council, where she is head of the tribe's cultural committee, said it is frustrating that Kennewick Man is still out of the ground. "I don't disagree that the scientists want to do their job, but there should be a time limit. The only concern we have as tribal leaders is he needs to return to Mother Earth," she said.

Vivian Harrison, NAGPRA coordinator for the Yakama, said it was disturbing to look at the slides Owsley showed, with the bones presented on a platform to be scrutinized from every angle. "Really, to me, it's sad. This is a human being and his journey has been interrupted by leaving the ground."

Jaqueline Cook, repatriation specialist for the Confederated Tribes of the Colville Reservation, said scientists' finding that the skeleton had been purposefully buried was significant.

"It says a lot that somebody took care of him," Cook said. "To me that says community. And that he is part of the land. And our land."

The day's presentation was "subtly traumatic," said Johnny Buck, one of Rex Buck's sons and a member of the steering committee of the Native Youth Leadership Alliance. "We have medicine people that took care of bodies. But we never did look so long at them."

In parting, Minthorn presented Owsley with a traditional gesture of tribal respect, a Pendleton blanket, on behalf of the Plateau Tribes. With it, he extended his hand — and asked for help in returning the skeleton of the Ancient One.

While they don't know where they are yet headed together, those gathered ended the day with something they did not have before: the start of a relationship.

In his closing prayer, Rex Buck said, "We have listened to this man, and he has listened to us. And it was good."