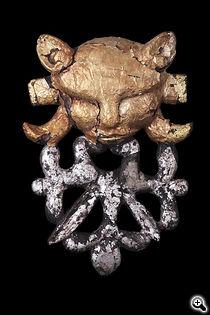 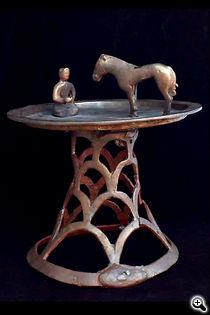 Round Tray on Conical Stand with Figures of Seated Man and Standing Horse in Center (bronze), chance find, Issyk, Semirechye/Zhetisu, Almaty region. Photo: The Central State Museum of the Republic of Kazakhstan

It is time for a pop quiz on Kazakhstani history. Going back more than 2000 years ago, the peoples who called what is present-day Kazakhstan home were:

B) Uncultured nomads who wandered the Steppe.

The answer may be closer to the third option (C) than previously believed, according to Claudia Chang, an archeologist at Sweet Briar College in Virginia, who has been conducting digs in Kazakhstan’s Semirechye region, just outside Almaty, for nearly 20 years. Recent findings suggest that the ancient nomadic societies of the Steppe operated in ways that do not bear much resemblance to the brutal and rudimentary picture of life that continues to linger in the popular imagination.

Chang has published her findings, along with works by eight other specialists, in a new monograph on Iron-Age archeology in Kazakhstan. The book, titled “Nomads and Networks: The Ancient Art and Culture of Kazakhstan,” was published by Princeton University Press earlier this year, in conjunction with an eponymous museum exhibition.

Originally installed at New York University’s Institute for the Study of the Ancient World, the Nomads and Networks exhibition sought to place artifacts from the Saka, Wusun and Pazyryk cultures of the first millennium BC within the context of other nearby early cultures in Persia and China. Objects like the intricate Wusun Diadem, a golden latticework inlaid with turquoise- and coral-specked animals; and dozens of gold cat and ibex plaques from Shilikty in the Tarbagatai Mountains were selected partly to show off their similarity to Persian and Chinese imagery, influences that were shared mainly through trade.

Winged creatures – half-eagle, half-deer, for instance – are among the elements that were shared between Central Asian motifs and those in Persia, according to Soeren Stark, co-curator of the Nomads and Networks exhibition and a contributor to the book. The items can be traced to China, as well.

Displaying the trove of intricate golden objects made by the Steppe tribes served another function: to provide a corrective to those who, throughout history, have offered less-than-flattering portrayals of ancient Central Asian societies.

"Nomadic elites were in close interaction [with other cultures],” Stark continued. “There was trade going on, they were serving in the Persian army.”

Ancient chroniclers were not so kind. Among their prominent characterizations, the Saka are described by contemporary Han Chinese sources as “those blue-eyed barbarians,” Chang said. The ancient Greek chronicler Herodotus, meanwhile, detailed their sacrifice practices in a graphic, grizzly manner that likely did not endear them to later readers. And, since the Steppe tribes themselves left no known written records, studying what they left behind is doubly important, noted Stark. “Archeology becomes a very important research tool because we have to go beyond the stereotypes that we read from their secondary neighbors,” he explained.

The museum exhibition appears to be part of a coordinated Kazakhstani government effort to fix Kazakhstan’s present-day international image as a modern economic and cultural hub in Central Asia that is also moving in the global mainstream. Support for the project was provided by a variety of Kazakhstani state agencies, including the embassy in Washington, Kazakhstan’s Central State Museum and the Presidential Center of Culture.

After New York, the exhibition traveled to the Smithsonian Institution’s Freer and Sackler galleries in Washington. At the opening there, then-ambassador, now-Foreign Minister Erlan Idrissov touted the “beauty, elegance and sophistication of the work done by my Kazakh ancestors who made such a great, yet unsung contribution to the development of civilization." The comments were posted on the Kazakhstani embassy’s website.

Two chapters of the “Nomads and Networks” monograph focus primarily on recent discoveries at Berel in the Altai Mountains. Dozens of kurgans, or burial mounds, have yielded a bevy of artifacts, including wool, wood, and other organic objects, preserved by a layer of permafrost. Other finds in Berel range from gilded horns and tack ornaments worn by horses to the remains of the horses themselves; and those they were meant to carry – a pair of male and female relatives, according to DNA analysis.

The Berel kurgans are also hailed by some as the crowning archeological achievement in independent Kazakhstan’s short history. The picture they paint of ancient nomadic life is one that many modern-day Kazakhstanis want to see, says Chang. But, she cautioned, the kurgan excavations yielded information mainly about how members of the elite horseman class of ancient Saka society lived and died. The mounds do not reveal much about how the commoners of Saka society existed.

“It’s kind of like dealing with the 1-percenters,” Chang said, comparing members of the Saka elite to today’s top earners in the United States. “The fact is, it wasn’t just people marauding with their horses. … The more we learn about nomads, the more we realize how cliché that term is. There were a variety of economic strategies.”

In her part of the Nomads and Networks project, a published essay and a blog, Chang outlined her theories of Saka and Wusun life based on less flashy evidence. Searching through the remains of farming settlements and relying on work done to identify animal remains, she has concluded that regular people often stayed in one place, contributing food, and perhaps manpower, to the warrior elite’s armies.

“The way that it has been put to me [by my Kazakh friends] is ‘we are a nomadic civilization,’” says Chang. “But for a historian, that’s almost like a contradiction in terms.”

A curator at the Smithsonian’s Freer and Sackler galleries, Alexander Nagel, took a stab at how artifacts in the exhibition can align with Chang's theory.

"When you imagine how many artists took part on this production, you also get the idea of what kind of life it was," he said. "Who were the artists? ... The whole community took part in the construction of these kurgans."