Karkemish (Turquie): an ancient city site on the banks of the Euphrates

The Great Staircase, part of the archaeological dig at Karkemish, an ancient city on the banks of the  Euphrates and on the border between Syria and Turkey. Joint Turco-Italian Archaeological Expedition at Karkemish

The Syrian civil war is not the first conflict to complicate Professor Nicolò Marchetti’s efforts to turn Karkemish, an ancient city site on the banks of the Euphrates, on Turkey’s southern border and inside a restricted military zone, into a public archaeology park. 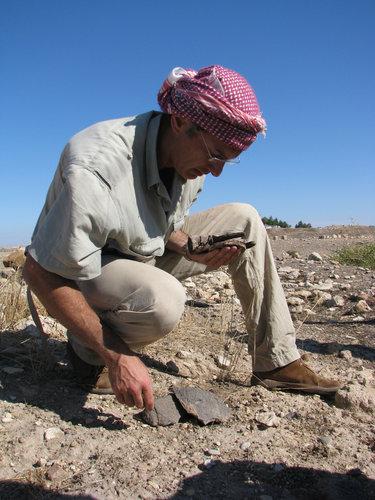 Nicolò  Marchetti  has been leading excavations at Karkemish on and off for two  years. Turco-Italian Expedition at Karkemish

Before his team started digging, under the watchful eyes of armed Turkish soldiers, he had to make sure that land mines planted in the 1950s had all been cleared away.

Mr. Marchetti — a tanned and lanky version of Hollywood’s Indiana Jones, who teaches Near Eastern, or pre-classical, archaeology at the University of Bologna — has led excavations at Karkemish on and off for two years after being granted the first access allowed to anyone in decades.

The aim is to open a first stage to tourism by October 2014. That goal remains realistic, he said during a tour of the site late last year. Still, conflict has had a way over the years of interrupting excavations here.

First identified by the British Museum archaeologist George Smith in 1876 as the kingdom of Karkemish mentioned in the Bible, the site was later explored with permission of the Ottoman sultan by a team that included David G. Hogarth, C. L. Woolley and T.E. Lawrence — later known as Lawrence of Arabia. They found Assyrian and Hittite temples, palaces and hieroglyphics. Some of their discoveries went to the Museum of Anatolian Civilizations in Ankara, the Louvre in Paris, and the British Museum in London.

Their work was halted by World War I. The dig briefly reopened in 1920 but was then closed again by fighting between the Turks and occupying French troops.

When the dust settled, about a third of the 90-hectare, or 220-acre, ancient city of Karkemish was in Syria.

The entire settlement, on both sides of the border, is classified as an endangered cultural site by the Global Heritage Fund, a nonprofit organization based in Palo Alto, California. But war is no respecter of culture: This month, NATO is preparing to place U.S. Patriot missile batteries in Gaziantep Province, where Karkemish is located, to ward off attack from Syria — though military officials say the deployment will be at least 40 kilometers, or 25 miles, from the site and will not affect it.

Today’s Karkemish in some ways resembles other digs that dot the rural Eastern Anatolia landscape, like Gobekli Tepe and Catalhoyuk, with their own remarkable traces of early civilizations. But as members of Mr. Marchetti’s team crouched recently in a clearing to clean and consolidate the surface cracks of a limestone carving from 1000 B.C., a worker could be seen checking for mines along a distant ridge.

“There are many reasons why this place is important,” Mr. Marchetti said last autumn before sitting down to a grilled meat and eggplant banquet prepared by local villagers. “It’s a huge site, it’s enormous, it’s on the Euphrates: that would be enough. But there’s much more of course.”

The team is due to return to the site in August. Experts say every hit of the pick could add to what is known about the Iron Age residents and rulers of Karkemish, who grew wealthy by trading commodities like wine and honey, horses and slaves. Most of the finds date from the Iron Age phase between 1000 and 700 B.C., Mr. Marchetti said.

Items like pottery shards are clues to food storage methods, and ornaments including a gold earring and lapis lazuli necklaces reveal the level of craftsmanship.

The settlement, he explained, included an acropolis, an inner town walled by ramparts that are pierced by two gates, and an outer town with a double wall and two more gates, both of which now lie in Syria. A so-called Water Gate allowed entry from the Euphrates along a road that led to a palace and two temples and to a grand staircase up to the acropolis. The mound where the upper royal citadel was situated is now home to the Turkish military barracks, watchtower and helicopter landing pad.

Archaeologists have been able to reveal a group of town houses where wealthy merchants may have lived, and a Neo-Assyrian cremation burial ground outside the city. Also found were items that tell of city government and the commercial role of Karkemish, including cylinder or stamp seals used by officials and merchants, some even engraved onto semi-precious gems.

Thus far, the most significant discovery by the Marchetti team, which includes experts from Gaziantep University and Istanbul University, is a palace built near 900 B.C. by the ruler Katuwa.

The palace remained in use, Mr. Marchetti said, through the Assyrian conquest in 717 B.C. It remained in Assyrian hands until the defeat in 605 B.C. by Nebuchadnezzar of Babylon.

“We dug for more than one month,” Mr. Marchetti said by e-mail this week. “Then slowly the structures of the palace began to appear. However, they were badly damaged to the west and only became better preserved while we proceeded to the east.”

But time ran out as the 2012 excavation season drew to a close, setting up what he called “the greatest expectations” for when the team returns this summer. “It takes sometimes years to uncover a monument and only in retrospect do you sense the full meaning of what has been achieved,” Mr. Marchetti said. “I think we may finish the palace in 2014 if our hypothesis on its layout is correct. And we already have another hypothesis on where a second palace may be located.”

One “eureka” moment came when Mr. Marchetti almost literally stumbled upon a two-meter-high stele inscribed by King Suhi I from around 975 B.C.

It was “my first day ever at the site,” he said. Permission from the Turkish military had just come through and he entered the area with a government inspector and a soldier. “I noted a large, regular black stone on surface, went close, and remained breathless staring at an almost intact monolith,” he said. “Stanley Kubrick would have liked it.”

He said he figured it was important because a winged disk, an exclusive symbol of a great king, was clearly visible on the top.

“I had entered with a pick in one hand and a camera in the other, and this is how we discovered the stele, lying on the ground,” he added.

To read the inscriptions, the team relies on people like David Hawkins, a professor emeritus at the School of Oriental and African Studies in London, who is an authority on Anatolian hieroglyphic writing, and “a real living legend in our field,” Mr. Marchetti said, along with the dig’s deputy director, the philologist Hasan Peker of Istanbul University.

“Hasan is a hero,” Mr. Marchetti said, describing another day at the dig. “He jumped high when I passed over to him a seemingly unimportant inscribed bit in basalt, and he cried, ‘Hey, we have new king of Karkemish here! See his royal title? We know of no other king whose name begins with this syllable.”’

Other finds include additional pieces from the Iron Age, the early Bronze Age, and even modern times with the discovery of a shovel thought to have been used by Lawrence himself.

The team also recovered a small bronze statue of a dog; a sculpted limestone torso that used to be attached to a head found by the Woolley team; and a 20-centimeter, or 8-inch, bronze statue of a storm god, an important deity for people who relied on rain to grow crops. (While this god often is depicted holding a thunderbolt, the statue found at Karkemish carried a silver dagger.)

“We think our main scientific duty here is reconstructing material in order to produce more a detailed historical framework,” he said.

Karkemish “was very important,” he said. “At that time, it was one of the rivals of Babylon and was making history because of its power, because of its location, because of the trading route which it controlled.”

The stele, for example, “in one shot filled up a new page of history,” Mr. Marchetti said, on a period about which very little was known. Its references to the great kings and more local rulers to whom the kings eventually ceded power, he said, give “a tantalizing glimpse into some detailed power structure of which we still do not grasp the essentials. We can actually follow two lines of the power structure in later inscriptions found at Karkemish in the old days. What we know and the mass of evidence changes a little every day with our excavations.”

But Mr. Marchetti has plans beyond the scientific for developing Karkemish as a public park, despite the obstacles.

That the Turkish authorities respect Mr. Marchetti, who fluently speaks what he calls “village Turkish,” seems to have played an incalculable role in making the site available.

“He is very appreciated by the local authorities,” the Italian ambassador to Turkey, Gianpaolo Scarante, said during a visit to the dig, “because he is a serious man, has an excellent reputation with the local people. He is a friend of everyone here. For an archaeologist, it’s very important. ”

“Everything is more difficult now,” Mr. Scarante said, “not because of politics, but because the site is in a delicate geographical position. But the Turkish authorities are trying, are doing their best, to permit us to go on.”

Thus Mr. Marchetti’s second goal is a more social one: to help the locals who have welcomed him and his team by helping to create a sustainable source of income and inspiration that will last beyond the current excavations. The region around Gaziantep is primarily agricultural, and much of the economy, aside from smuggling, has been devastated by the loss of trade with Syrians who used to stream across the border to shop.

Two young Italian architects, Alessandra Giacardi and Massimo Ferrando, will help develop what Mr. Marchetti called a “master plan” that melds conservation and public presentation, letting visitors “walk on ancient streets in an original environment that protects the local heritage and, in a local community that has no industries other than farming, creates some badly needed alternatives so that the younger generation isn’t forced to leave the area.”

With the support of the fund in California, the project also calls for the opening of a school for restoration, the education of local guides, and development of a high-quality venue for selling local produce and rejuvenated local crafts.

“By bringing people to the site, by letting them stand on the site, creating an interest in the site, we can keep the area socially inhabited,” Mr. Marchetti said. “We do not think Karkemish as a laboratory. It’s a journey through time, it forces new dialogues. We are trying to make a mark.”