During the first season of excavations in September 2013, the Kani Shaie Archaeological Project (KSAP)1 explored the history of occupation at Kani Shaie in the Bazyan Valley in Iraqi Kurdistan. In this short report, the directors of KSAP describe the preliminary results of the first systematic investigation in the region of a center dating to the late fourth and early third millennium B.C.E.

Map showing the location of Kani Shaie (labeled in orange) in the context of the Early Bronze Age Near East. Click for a larger view. Courtesy of Steve Renette.

Throughout the twentieth century, archaeologists have focused their attention on the southern Mesopotamian plains of Iraq, largely neglecting the mountainous northern part of the country. As a result, the region east of the Tigris River is largely terra incognita for ancient Near Eastern history. This situation is about to change dramatically with an explosion of archaeological fieldwork projects in Iraqi Kurdistan, which has been a safe, prosperous and very welcoming haven after the dramatic developments that have upset Syria and most of Iraq.

In 2012, we formed the Kani Shaie Archaeological Project with the goal to study the history of human settlement in the Bazyan Valley, on the road between Kirkuk and Sulaimaniyah. In its first phase, the project focuses on stratigraphical excavations at the site of Kani Shaie. This site is centrally located within the Bazyan Valley and is the largest, most visible ancient settlement. Nevertheless, its still very modest size (ca. 2 ha and 11 m high) provides the opportunity to quickly gain insights into to the region’s history and development of material culture.

As a result of the first season of fieldwork in September 20132, we now know that Kani Shaie was a local center within the Bazyan Valley during the fourth and third millennium B.C.E. By the end of its lifespan the site became too high and small, causing the population to shift occupation elsewhere within the valley. Two thousand years later, when the Parthian Empire held sway over the region, a small village grew at the base of the valley’s oldest center. The attractive location, close to several springs, attracted people once again during the early Islamic period, when villagers used the high mound as a burial ground for their deceased. To this day the site is a social focal point of the valley. The name of the site, Kani Shaie, roughly means “the spring where people dance,” referring to the joyful activities that take place in this idyllic, lush place. 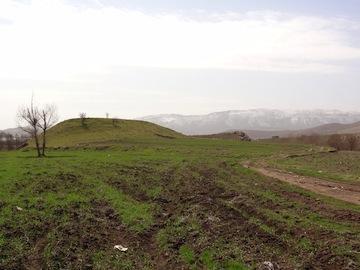 View of Kani Shaie in March 2012. Courtesy of KSAP.

The first inhabitants of Kani Shaie lived about 6,500 years ago, during the so-called Ubaid period. At this time, the fertile mountainous valleys of the Zagros Mountains and its hilly piedmont were dotted with numerous villages. During the next thousand years, Kani Shaie developed into a local center within the Bazyan Valley, probably due to its central location. By the second half of the fourth millennium B.C.E., Kani Shaie was a node in a network that spanned the entire Near East. The pottery used by the inhabitants at this time is indistinguishable from ceramics used at similar sites in Turkey, Syria, Iran and south Iraq.

This phenomenon is often called the “Uruk expansion,” which refers to the theory that southern Mesopotamian city-states—Uruk being the largest one—established colonies far along major trade routes to gain access to raw materials. The closest and most famous site of this nature is Godin Tepe—across the border in Iran—with which Kani Shaie appears to have many similarities. However, even though Kani Shaie is located on a route that connects the northern Tigris region with the Zagros Mountains, the valley is situated off the major trade routes for southern Mesopotamia and away from valuable raw materials.

An important research goal for future seasons of fieldwork will be to address the importance of Kani Shaie during the Uruk period and how it was connected with sites throughout the Near East.

A major find during last year’s excavations might offer a clue to this conundrum. Associated with a large, burnt layer that seals the Uruk period occupation at the site, we found a clay tablet with a numerical mark and sealed several times with the same cylinder seal. The scene depicted on this seal impression is unusual, but perhaps at home in this region. It shows a man sending off a boat carrying five horned animals, possibly mountain goats. Could this indicate that an important economic role of the region was the supply of animals to the Mesopotamian plains downstream? If so, Kani Shaie might have functioned as the administrative center for these activities.

Uruk period numerical tablet with seal impression, along with two 3D scans of the tablet. Courtesy of KSAP.

Around 3,200 B.C.E., the beginning of the Early Bronze Age in the region, the site was burnt down, either by accident or violently. Soon after this destruction, the top of the site was leveled and a new kind of settlement, with a very different set of material culture, began. This period following the Uruk period and into the early third millennium B.C.E. is one of the least understood in the history of the ancient Near East, and Kani Shaie is the first site in the region dating to this period to be excavated systematically. 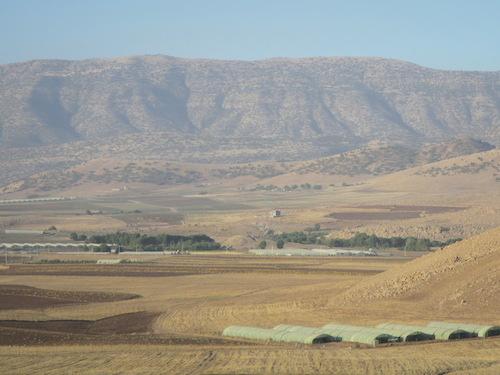 The Bazyan Valley with Kani Shaie in a green oasis against the backdrop of the formidable Bazyan hill range. Courtesy of KSAP.

Survey projects in the region have had a difficult time recognizing sites belonging to the beginning of the Early Bronze Age—so much so that some have even suggested a possible abandonment of the region. This impression is certainly a result of a lack of research, which the Kani Shaie Archaeological Project aims to amend.

From the preliminary results of excavations in 2013, it seems that Kani Shaie had become an agricultural village after the destruction of the Uruk period center. The settlement appears to have consisted of small-scale architecture, continuously built and rebuilt for several centuries. Nevertheless, the site continued its role as administrative center, attested by the presence of two cylinder seal impressions. One of these seal impressions is part of a tradition widely in use all across the Zagros Piedmont, while the other seems to be of a local style and was impressed on a large jar.

Kani Shaie also remained in contact with distant regions. During the early third millennium B.C.E., different distinct painted ceramic traditions emerged tied to specific regions. At Kani Shaie several of these traditions have been found together alongside an unknown local style, consisting of bowls painted with large spirals. At this point it is unclear whether these different kinds of ceramics were imported at the site or if the inhabitants of Kani Shaie participated in the different traditions surrounding them.

While there is some indication that the site continued to be in use until the end of the third millennium B.C.E., settlement gradually moved away from Kani Shaie, allowing the growth of new centers elsewhere in the area. Nevertheless, throughout its history the site remained central to life in the Bazyan Valley, sometimes in the form of villages at its base or at other times as a clearly visible focal point and a social gathering place.

The late fourth and early third millennium B.C.E. is the advent of Near Eastern history, with developments that would lead to the formation of polities and ethnic groups that appear in historical sources centuries later. When the Akkadian king Naram-Sin marched on the Zagros, he defeated the Lullubi. In its turn, the Akkadian Empire was brought to its knees by the Guti who came down from the Zagros Mountains. And the powerful kings of Ur, Isin and Larsa had to compete with the king of Simurrum for control over the Zagros Piedmont. New research in Iraqi Kurdistan can finally tell the stories from the perspective of the Zagros peoples, and the Kani Shaie Archaeological Project aims to shed light on the developments that lead to their rise to prominence.

In September 2014 we will return to the site with a larger team to address the questions raised by the first excavations last year. Through a research program that makes full use of archaeological tools at our disposal, such as archaeobotanical studies, scientific analysis of the ceramics, osteological analysis of the human remains and detailed radiocarbon dates, we hope to provide valuable new insights about poorly understood periods in a region rarely studied before.

2 KSAP works closely together with the Sulaimaniyah Directorate of Antiquities and its director Dr. Kamal Rasheed. We wish to extend our greatest gratitude to Kamal Rasheed, Hashim Hama (director of the Sulaimaniyah Museum), Zana Abdullkarim (our representative), Dlshad A. Marf Zamua (Leiden University) and Kozad M. Ahmed (Sulaimaniya University) for their generous hospitality, help and advice.