Recent archaeological excavations at the site  Kanaljorden in the town of Motala, Östergötland in Central Sweden have unearthed a complex Mesolithic site with ceremonial depositions of human crania in a small lake. The skulls have been been handled through a complex ceremony that involved the displaying of skulls on stakes, and the deposition of skulls in water. 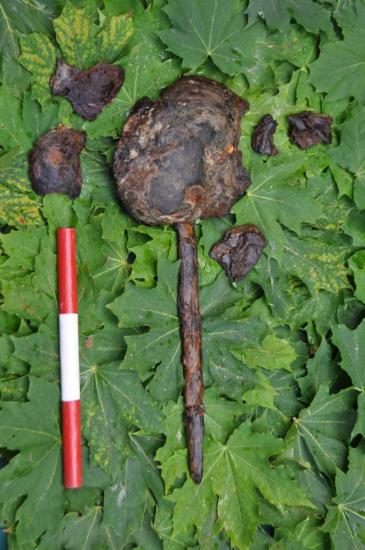 One of the skulls with a wooden stake inserted into foramen magnum. Image: Stiftelsen Kulturmiljövård

The rituals were conducted on a massive (14 x 14 m) stone-packing constructed on the bottom of a shallow lake. Besides human skulls, the find material also include a smaller number of post-cranial human bones, bones from animals as well as artefacts of stone, wood, bone and antler. 14C-datings on human  bones and wooden artefacts date the depositions to 6212-5675 cal BC. The excavations are conducted by Stiftelsen Kulturmiljövård and are taking place in advance of the construction of a new railway. The investigation of the ritual context in the wetland have taken place 2009-2012. 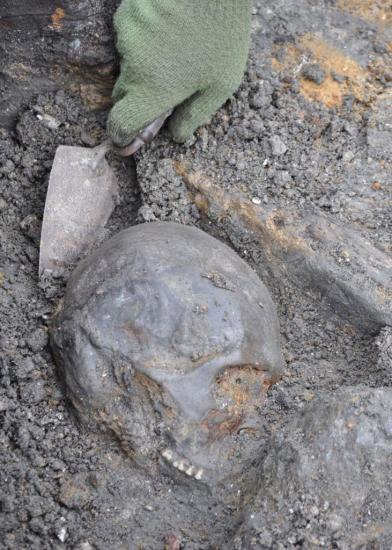 The town of Motala was brought to the attention of Mesolithic researchers ten years ago with the   excavation of the large Mesolithic settlement Strandvägen, located by the shore of the river Motala Ström (Carlsson, T. 2008. Where the river bends under the boughs of trees. Strandvägen - a late mesolithic settlement in eastern middle Sweden. Stockholm, Riksantikvarieämbetet). The Strandvägen dig uncovered a rich find material, a large fauna material as well as numerous tools of bone and antler, categories of finds seldom found in Central Sweden. The excavations at Strandvägen and another riverside site: Verkstadsvägen, have continued in 2009-2011 in parallel with the dig at Kanaljorden. While both Strandvägen and Verkstadsvägen are located directly by the shore on opposite sides of the river, Kanaljorden is situated 80m from the river and instead on the brink of a small lake (nowadays a peat fen). 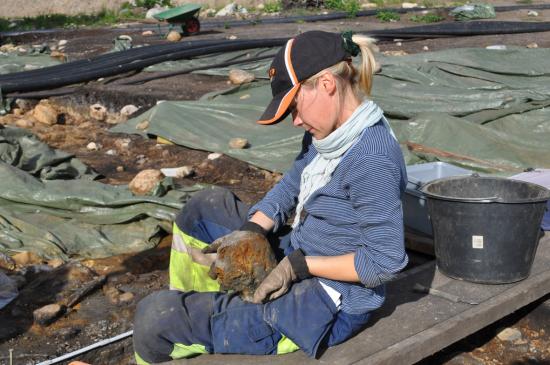 The three sites are located only a few hundred metres apart, and must clearly be understood in relation to each other, but also to the specific topographical location: the outlet of lake Vättern into Motala Ström. Lake Vättern is Scandinavia's second largest lake 130x30km and 128m deep. Despite its size, Vättern has only one outlet, the river Motala Ström. The group of Mesolithic sites discussed here are located just a few hundreds metres downstream from the lake. The location can be considered strategic both from the point of view of communication and subsistence - in historical times Motala Ström was famous for salmon and trout fisheries.