Vampire burial: The teeth were removed and a fragment of rock placed in the mouth Kamierskie Info

Archaeologists have discovered the grave of a suspected vampire in Kamien Pomorski, northwestern Poland.

The body, which dates back to the 16th century, was unearthed during a dig in a marketplace in the town, situated in the West Pomeranian Province.

As reported in Kamienskie.info, the team found unusual features which indicated the burial site was vampiric.

The teeth, or "fangs" had been removed and a fragment of rock had been inserted into the mouth. In addition, his leg had been staked in order to prevent the body from rising from its grave.

Slawomir Gorka, who led the dig, said: "A piece of brick rubble in the mouth and pierced thigh indicates that it is a vampire burial. This was done not for him, but for the community, who lived here." 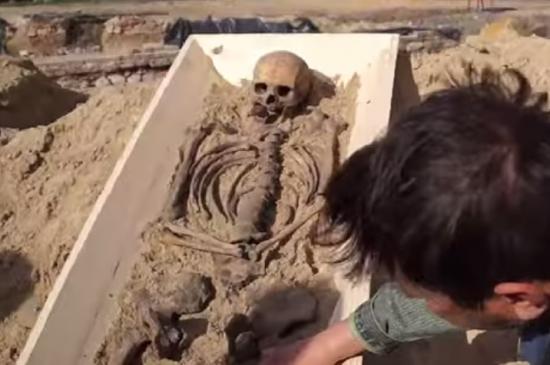 Gorka added that the same rituals were common in burials in the Kamien Pomorski area between the 13th and 17th centuries. The body was buried in the cemetery next to the town church.

"We have to understand that the cemetery existed from the thirteenth to the eighteenth century, but not in every period. The body was buried when the cemetery no longer existed, towards the side of what is now the cemetery," he said.

"Initially we thought he had suffered a leg wound, but from sifting through the earth underneath, we realised there was a hole likely made from a puncture."