A “huge” workshop for flint tools dating back to the Late Chalcolithic, or about 4,500-4,200 years ago, has been discovered by Bulgarian archaeologists in archaeological excavations of a settlement moundnear the town of Kamenovo, Razgrad District, in Northeast Bulgaria.

The flint workshop has been found somewhat unexpectedly since the archaeologists started out their digs with the aim of excavating part of a Chalcolithic necropolis.

The excavations have been organized and funded by the Razgrad Regional Museum of History. They covered an area of 70 square meters on a site from the Late Chalcolithic (Aeneolithic, Copper(-Stone) Age) with a single archaeological layer averaging 0.6 meters.

The archaeological layer consist of a black sediment mixed with fragments from ceramic vessels and a huge amount of flint, including nuclei for carving out flint tools, unfinished, and completed tools.

The Bulgarian archaeologists have also discovered a clay-coated ground which is where the workshopfor the production of flint tools was located. For the most part, the flint material was first heated, and was then shaped into different types of tools. 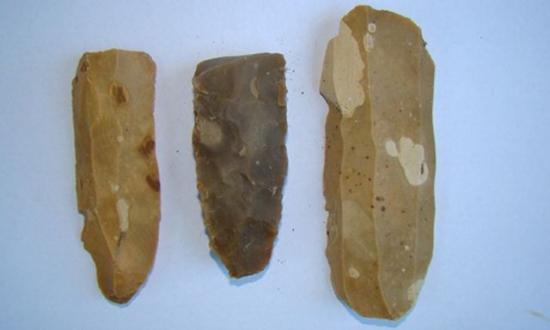 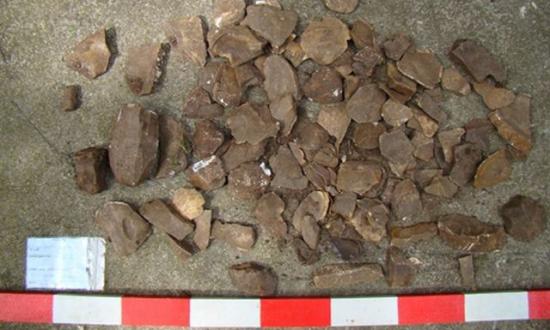 Flint nuclei which were used for the carving of tools

The prehistoric people mined the flint in quarries located in the nearby towns Ravno and Topchii.

The archaeologists believe that the flint workshop in Bulgaria’s Kamenovo started working during theEarly Chalcolithic within a settlement mound dating back to 4,800 AD, and later, between 4,500 and 4,200 expanded to produce flint tools for the entire southern part of the Balkan Peninsula.

This is evidenced by the fact that many of the flint tools discovered in the known prehistoric settlements in Bulgaria are now believed to have originated precisely in the flint workshop in Kamenovo. The workshop itself is described as having been of a “huge” size for its time.

Additional artifacts discovered during the excavations in Kamenovo – such as zoomorphic andanthropomorphic items, loom weights, cult artifacts, bone needles, and small fragments of plaster are all construed as testimonies for the existence of a prehistoric settlement beyond the settlement mound in question.

The excavations of the Chalcolithic flint tool workshop have been wrapped but are due to continue in September 2015 with funding from Bulgaria’s Ministry of Culture.

They are going to be expanded to the yard of a former school in the town of Kamenovo whoseconstruction in 1910 led to the discovery of a number of graves with inventory from the Late Chalcolithic.

The Bulgarian archaeologists are yet to establish the precise spacial and time extent for Chalcolithic settlement, its flint workshop, and its necropolis.

The existence of the Chalcolithic settlement in Kamenovo in Northeast Bulgaria was first recorded byCzech-Bulgarian archaeologist Karel Skorpil, the founder of modern-day Bulgarian archaeology, at the end of the 19th century. A large number of artifacts were discovered in 1910 during the construction of Kamenovo’s old school building.

In 2000, the site was studied by French archaeologists who hypothesized that the place had harbored“workshops for prestigious flint tools”. This hypothesis is based on the fact that these tools have been found only in graves of richer prehistoric people indicating some of the earliest instances of social inequality in human history.