Archaeologists have uncovered evidence that ancient Greeks believed the dead could rise up from their graves.

In an article recently published in Popular Archaeology Magazine, University of Pittsburgh Postdoctoral Fellow and writer Carrie Sulosky Weaver examines and summarizes the evidence in the archaeological and historical record that supports the suggestion that the ancient Greeks believed in the ‘undead’, or ‘revenants’, individuals who could emerge from a state of death to something that was neither living nor dead—leaving their graves at night to harm the living.

As one case in point, she elaborates on finds unearthed in a cemetery located near the ancient coastal Greek town of Kamarina in southeastern Sicily. Known as Passo Marinaro, this cemetery served as a Classical period necropolis in use from the 5th through 3rd centuries BCE. Approximately 2,905 burials have been excavated by archaeologists at th site, more than half of which contained grave goods, such as terracotta vases, figurines, and metal coins.

But two of the burials were unique. The first, designated tomb 653, contained an individual who, although of unknown gender, apparently suffered from serious malnutrition and illness in life. But “what is unusual about Tomb 653 is that the head and feet of the individual are completely covered by large amphora fragments,” states Weaver. “The heavy amphora fragments found in Tomb 653 were presumably intended to pin the individual to the grave and prevent it from seeing or rising.” The second burial, designated tomb 693, contained the remains of a child about 8 to 13 years old. Also of indeterminate gender, this individual was buried with five large stones placed on top of the body. “Like the aforementioned amphora fragments,” states Weaver, “it appears that these stones were used to trap the body in its grave.”* 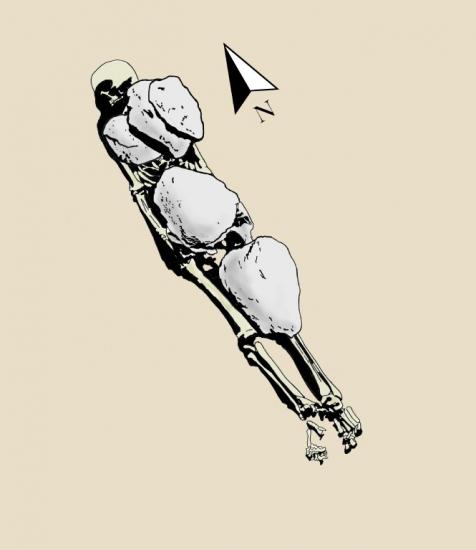 Drawing of the burial in Tomb 693. Drawing by D. Weiss from G. Di Stefano's excavation journals.

Weaver draws upon ancient documentary and other archaeological records throughout the Mediterranean world from the Neolithic through the 19th century CE that tend to lend support to the Kamarina burials as possible ‘revenants’.

“Although there are no clear indicators in either the burial contexts or the skeletal remains that would explain why the occupants of Kamarinean Tombs 653 and 693 were pinned in their graves, their special treatment suggests that necrophobic beliefs and practices were present in Greek Sicily,” she concludes about the burials. “However, our understanding of these traditions is tenuous and more questions than answers remain. It is hoped that the careful  examination of future cases will shed light on this unusual custom and provide us with a more complete picture of necrophobia [the irrational fear of the dead and things associated with death] in the ancient Greek world.”*