It was thought that all copper in Norway during the Middle Ages times was imported, since there have never been any archaeological finds of medieval ore extraction and smelting. 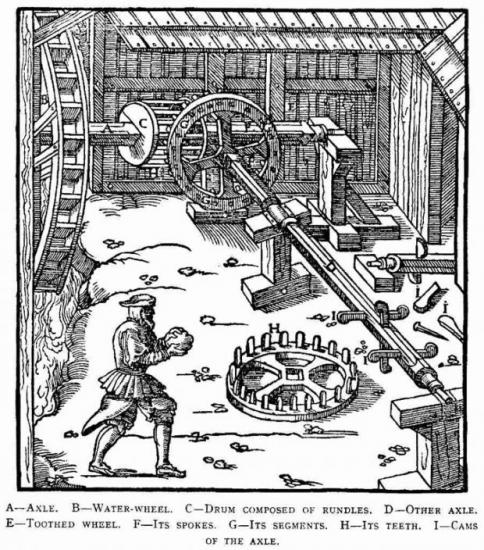 This drawing illustrates how power from a waterwheel can be connected to a shaft. The shaft could then be connected to and operate a bellows in a smelter. From the work De Re Metallica, written by Georgius Agricola and printed in 1556. The drawing shows a section of a larger and more advanced smelting works than the one apparently used in Norway two or three centuries earlier. (Source: Project Gutenberg)

But now signs of advanced copper production from the 1300s or even earlier are being uncovered in the municipality of Meråker. The discovery has been made on an island in the Kopperåa River.

The river’s name -- Kopperåa -- was used in old written documents and, as it refers to copper, is one of the reasons why Stenvik and his colleagues picked this as a place to look.

Previous finds from the location include charcoal, slag and small green clumps of copper. 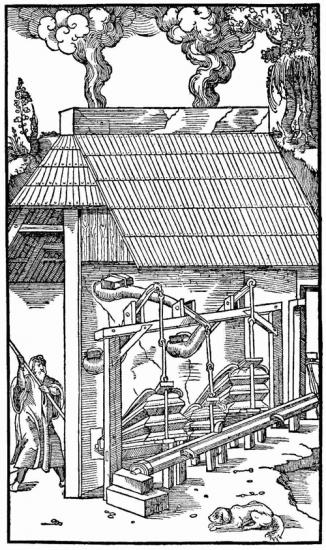 Archaeologists were energized this summer when they made several new discoveries. They found the remains of wooden structures beneath a collapsed pile of stones that provided evidence of technologically advanced production methods. 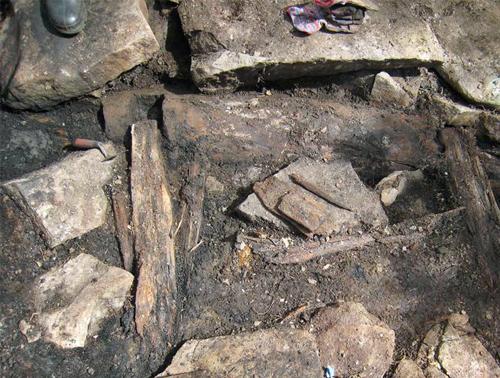 A close-up of the wood construction that archaeologists think is a shaft with hinges that could have been attached to a pair of bellows. (Photo: Lars F. Stenvik)

One eye-popper was a split log that could have been used as a shaft in a drive gear that would enable its makers to capture the power of the rushing river.

The shaft was inlaid with some sort of hinge that could have been attached to a pair of bellows.

Bellows were used to blow air and literally fan the flames to secure sufficiently high temperatures in the smelting process. Bellows could be hand-powered.

The site in the middle of the river, the drive gear and other discoveries suggest that water power rather than manpower was used to operate a bellows here.  According to Stenvik, this would have been an advanced technique in Europe for the 1300s.

Traces of what might have been a dam connected to the facilities have also been found.

This is where the intake of a water channel leading up to the smelter might have been. (Photo: Lars F. Stenvik)

“It’s hard to figure out why they would place a smeltry here other than to use hydropower for the process. You’d have a hard time finding a more out-of-the way place,” says Stenvik.

The Kopperåa site isn’t an easy dig. In addition to being off the beaten track it isn’t very hospitable.  The archaeologists have had to battle with snowfall in early June, floods and storms.

The smelter on the island in Kopperåa is likely also the country’s oldest processing facility for the production of metals from any kind of mined ore.

Although iron had been produced in Norway since around 500 BC, it was made from bog ore, rather than ore extracted from solid rock.

Copper smelting required other knowledge and depended on a complicated, multi-staged metallurgical process.

Who had the knowledge and wealth at that time to begin smelting copper? Stenvik says it’s possible copper production was carried out by local farmers in Meråker, but it’s more likely that the knowledge and the funding for the operations came from further away.

Two key powers were at play in the medieval Trøndelag – the Cistercian Monks and the Archbishop of Nidaros.

The Cistercians founded a monastery at Munkeby in Levanger Municipality in the 1100s.

Orders of Catholic monks and nuns established international networks of monasteries and abbeys all over Europe. They could also read, and had the means of disseminating important technological knowledge.

Stenvik says the Cistercians were on the cutting edge at the time in terms of metallurgy and the use of water power in combination with dams.

There are also indications that suggest the Cistercians were interested in copper extraction. More recent copper mines have been operated near the monastery in Levanger and Stenvik has found rocks containing copper ore in the monastery walls.

The other likely candidate in the region is the Archbishop of Nidaros, with Nidaros the ancient name for today’s Trondheim. The archbishop represented a power centre that was only overshadowed in medieval Norway by kings, and the Church would have been interested in controlling copper production.

The archbishop would have had use for copper for church bells and roofing. At times he was also empowered to mint coins, which also required copper. In the Middle Ages even silver coins contained a certain amount of copper.

Stenvik isn’t currently able to determine or conclude who was behind the smelting operations.

“We can say that we now have two suspects and are about ready to press charges,” he says.