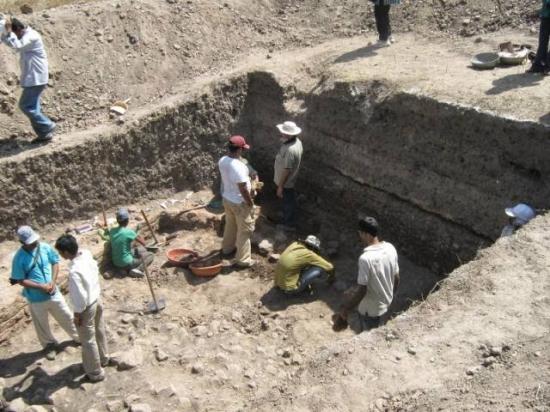 Archaeologists from city-based Deccan College Postgraduate and Research Institute excavating ancient ruins near Junnar have finally cracked the mystery of the large brick structures found on the site. It is believed that these structures - three of which have been excavated so far - were used as granaries during the rein of the Satavahanas.

"We have excavated three brick structures that are two metre in length and breath and 3.2 metre in height. There are several other Satavahana sites in Maharashtra, but nowhere else have such structures been found. What is interesting is that there are no doorways in these structures, but the opening is at the top," said Shreekant S Jadhav, director of the excavations being conducted in Junnar.

Vasant Shinde, senior archaeologist and vice chancellor/director at the Deccan College Postgraduate and Research Institute, has been able to confirm that they believe these structures were used to store grains.

"The outer edge of the brick structure was found to be plastered with black-cotton soil which is unlike the whitish-grey soil found in and around the dig. This black cotton soil may have been used to keep insects and rodents out," Jadhav added.

Jadhav's team has collected soil samples that will be analysed by in the Archaeobotanical laboratory of the institute to confirm their findings.

The excavations in Junnar began in 2005 and the first of these brick structures were found a few years ago. "For a long time we wondered why these structures had been created," Jadhav said.

"There were two indicators. The first was that at the same levels where these ruins were found, we also discovered several coins from the Satavahana period. The second important marker was the size of the bricks. The dimensions of the bricks (48cm by 29cm with a 10 cm thickness) are characteristic of the bricks used in that period," Jadhav added.

Jadhav and his team, including his PhD students Vijay Sarde, Nilam Dapare and Nalini Naik hope that further excavations will reveal the answers to other questions.

"There are 204 rock-cut caves in the area. We want to know what the relationship was between the Buddhist monks who lived in the caves and the people of Junnar. We are also keen to dig further and explore if there are any remains from the pre-Satavahana period. Very few remains from Mauryan times have been found in Maharashtra, we may find some here," Jadhav said.