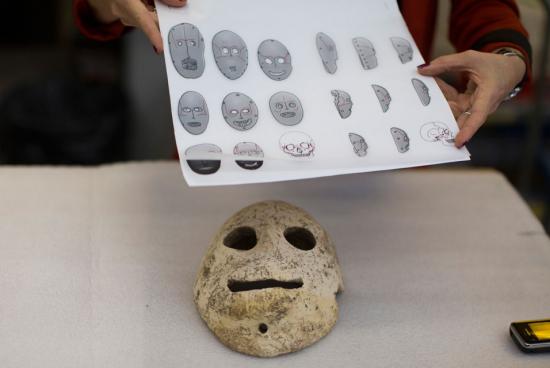 An Israel Museum Curator of prehistoric cultures and the Face to Face Exhibition shows diagrams of one of the rare 9,000-year-old Neolithic stone masks, all originating from the Judean Hills and Judean Desert, which are to go on public display for the first time at the Israeli Museum in Jerusalem on March 5, 2014. These masks are believed to have represented the spirits of dead ancestors. AFP PHOTO/AHMAD GHARABLI.
The Israel Museum brings together for the first time a rare group of 9,000-year-old stone masks, the oldest known to date, in a groundbreaking exhibition opening in March. Culminating nearly a decade of research, Face to Face: The Oldest Masks in the World showcases twelve extraordinary Neolithic masks, all originating in the same region in the ancient Land of Israel. On view from March 11 through September 13, 2014, the exhibition marks the first time that this group will be displayed together, in their birthplace, and the first time that the majority of them will be on public view. Originating from the Judean Hills and nearby Judean Desert, the twelve masks on view each share striking stylistic features. Large eye holes and gaping mouths create the expression of a human skull. Perforations on the periphery may have been used for wearing them, for the attachment of hair, which would have given the masks a more human appearance, or for suspending the masks from pillars or other constructed forms. Based on similarities with other cultic skulls of ancestors found in villages of the same period, the masks are believed to have represented the spirits of dead ancestors, used in religious and social ceremonies and in rites of healing and magic. By recreating human images for cultic purposes, the early agricultural societies of Neolithic times may have been expressing their increasing mastery of the natural world and reflecting their growing understanding of the nature of existence. "It is extraordinary to be able to present side by side this rare group of ancient stone masks, all originating from the same region in the ancient Land of Israel," said James S. Snyder, Anne and Jerome Fisher Director of the Israel Museum. "That we have been able to assemble so many – first for intensive comparative research and then for display – is a tribute to the collections that were so cooperative in making these treasures available to us. And, given their origins in the region and the context provided by the adjacent setting of our Archaeology Wing, their display in our Museum in Jerusalem carries special meaning, underscoring their place in the unfolding history of religion and art." The current presentation is the result of more than a decade of research. For many years, the Israel Museum has held in its collections two Neolithic stone masks–one from a cave at Nahal Hemar in the Judean Desert and the other from Horvat Duma in the nearby Judean Hills. A chance discovery of photographs of similar masks led Dr. Debby Hershman, the Museum’s Curator of Prehistoric Cultures, to begin to research the subject. Hershman enlisted the assistance of Professor Yuval Goren, an expert in comparative microarchaeology at Tel Aviv University, to explore the masks' geographical origins, as well as of the computerized archaeology laboratory at the Hebrew University of Jerusalem to conduct 3-D analysis that shed light on their comparative features and functions. The current display reflects the fruits of this in-depth research, bringing together twelve striking and enigmatic masks near the place of their origin and for the first time. Face to Face is curated by Dr. Debby Hershman, Ilse Katz Leibholz Curator of Prehistoric Cultures. The exhibition and its accompanying publication were made possible through the generosity of Judy and Michael Steinhardt, New York, and with additional support from the donors to the Museum’s 2014 Exhibition Fund: Claudia Davidoff, Cambridge, MA, in memory of Ruth and Leon Davidoff; Hanno D. Mott, New York; the Nash Family Foundation, New York; and Yad Hanadiv, the Rothschild Foundation in Israel.