The University of Cincinnati’s mastery of ancient Maya mysteries continues with new research from professor of biological sciences David Lentz.

UC faculty have been involved in multiple research projects concerning ancient Maya culture for more than a decade. This latest Maya study from Lentz focuses on Cerén, a farming village that was smothered under several meters of volcanic ash in the late sixth century. 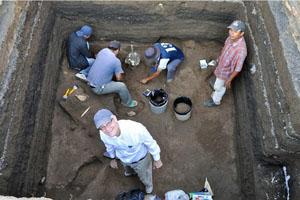 David Lentz, at bottom, joins workers on site at the excavation of Cerén.


Lentz will present his research, “The Lost World of the Zapotitan Valley: Cerén and its Paleoecological Context,” at the 78th annual meeting of the Society for American Archaeology, held April 3-7 in Honolulu. More than 3,000 scientists from around the world attend the event to learn about research covering a broad range of topics and time periods.

THE SCIENTIFIC GIFTS OF VOLCANIC CATACLYSM

Cerén, now a UNESCO World Heritage Site known as Joya de Cerén, was discovered in El Salvador in the late 1970s when a governmental construction project unearthed what turned out to be ancient ceramic pottery and other clay structures. The initial archaeological excavation was directed by Payson Sheets, a faculty member at the University of Colorado and a friend of Lentz.

Cerén is sometimes called “the Pompeii of Central America,” and much like that doomed ancient Roman city, the wreckage of Cerén was remarkably well preserved by its volcanic burial shroud. So that bad news for the Cerén villagers became good news for archaeologists centuries later.

Lentz specializes in paleoethnobotany and oftentimes in his work – including at other Maya sites – he’s left to interpret complex meaning from splinters of charred wood and hard nut fragments. The Mayas’ tropical environment, which isn’t conducive to preserving plant remains, doesn’t make things any easier. 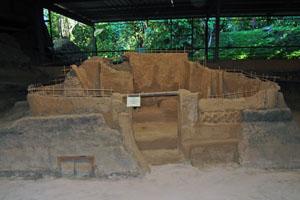 What is thought to be a Maya shaman's house at Cerén.

But the situation was different at Cerén. The village’s sudden and complete ruin sealed it under layers of preservative ash. So Lentz’s research there is still challenging but in an unfamiliar way.

“It was tricky because we kept encountering things we’d never encountered before at a Maya site,” Lentz says. “They were just invisible because of the lack of preservation.”

GARDENS, CROPS AND OTHER SURPRISES

A few examples of what Lentz and his team have discovered at Cerén:

- They found tremendous quantities of a root crop (malanga, a relative of taro) that previously had not been associated with Maya agriculture. They found another “invisible” crop of manioc alongside the more anticipated fields of maize, and they found grasses no longer in existence on the modern-day El Salvador landscape.

- They made what is thought to be the first discovery of a Maya kitchen, complete with intensively planted household garden. “We could tell what was planted around the houses,” Lentz says. “This is fabulous because people have long debated how the Maya did all this. Now we have a real example.”

- They found a household with more than 70 ceramic pots, many used to store beans, peppers and other plant matter. Having that many vessels in one home was an unusual discovery for what is thought to be a small, farming village. Lentz likened it to having four or five sets of China in a typical American home.

- They found large plots of neatly rowed land, evidence of ridge and furrow agriculture. Lentz also posits that the people of Cerén surrounded their homes with orchard trees. These discoveries seemingly debunk the common theory that the Maya employed a slash-and-burn agriculture method. 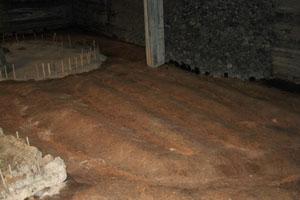 Ridged and furrowed land, believed to be a maize field.


- They found a raised, paved pathway called a “sacbe,” which was used by the Maya for ceremonial and commercial purposes. Lentz plans additional research on the sacbe to see what other significant discoveries could be made by following the path.

From these new discoveries come many lessons, a lot of them ecological. Lentz has studied how the Mayas effectively implemented systems of agriculture and arboriculture. He is intrigued by what made these methods successful, considering the Maya population was much denser than what exists on the modern landscape.

His findings at Cerén give him new pieces to plug into the Maya puzzle. Furthermore, they help us understand how humankind affects the natural world.

“Cerén is regarded internationally as one of the treasures of the world,” Lentz says. “What’s been found there gives you a real idea of what things were like in the past and how humans have modified things. I think what we’re learning there is revolutionizing our concept of the ancient past in Mesoamerica.”