A jade seal found in the interior coffin of a 2,000-year-old tomb in east China's Jiangxi Province has helped identify its master as the Marquis of Haihun, who had a short-lived reign of 27 days as an emperor of Western Han Dynasty.

Xin Lixiang, head of the excavation expert panel of the Haihunhou Tomb, announced it at a press conference in the Beijing Capital Museum Wednesday.

The announcement also commenced a three-month show of more than 400 artifacts selected from over 10,000 items unearthed from the tomb during the 5-year-long excavation.

Xin, who is one of China's most authoritative archeologists for the Qin and Han dynasties, said the research team found a seal of white jade at the waist position of the human remains.

The printing base is inscribed with the seal characters of "Liu He", name of the Marquis of Haihun, who is also the grandson of Emperor Wu whose reign ushered in one of the most prosperous periods in China's history. 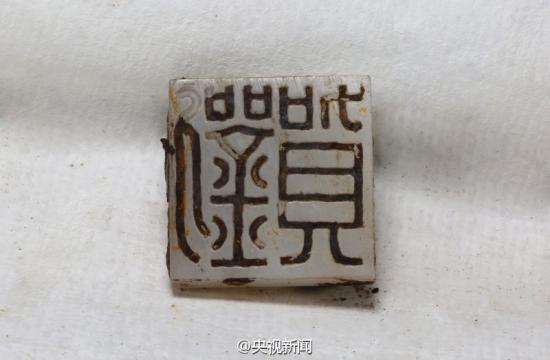