Archaeologists in China have discovered a mausoleum, dating back over 2,100 years, that contains three main tombs, including the tomb of Liu Fei (shown at bottom), the ruler of the Jiangdu kingdom in China.  Credit: Photo courtesy Chinese Archaeology

A 2,100-year-old mausoleum built for a king named Liu Fei has been discovered in modern-day Xuyi County in Jiangsu, China, archaeologists report.

Liu Fei died in 128 B.C. during the 26th year of his rule over a kingdom named Jiangdu, which was part of the Chinese empire.

Although the mausoleum had been plundered, archaeologists found that it still contained more than 10,000 artifacts, including treasures made of gold, silver, bronze, jade and lacquer. They also found severallife-size chariot and dozens of smaller chariots.

Excavated between 2009 and 2011, the mausoleum contains "three main tombs, 11 attendant tombs, two chariot-and-horse pits, two weaponry pits" and the remains of an enclosure wall that originally encompassed the complex, a team of Nanjing Museum archaeologists said in an article recently published in the journal Chinese Archaeology. The wall was originally about 1,608 feet (490 meters) long on each side. [See Photos of the Ancient Mausoleum and Artifacts]

The archaeologists said their work was a "rescue excavation," as the site was threatened by quarrying.

The tomb of Liu Fei, the ruler of the Jiangdu kingdom in the Chinese empire.  Credit: Photo courtesy Chinese Archaeology

A large earthen mound — extending more than 492 feet (150 meters) — once covered the king's tomb, the archaeologists say. The tomb has two long shafts leading to a burial chamber that measured about 115 feet (35 m) long by 85 feet (26 m) wide.

When archaeologists entered the burial chamber they found that Liu Fei was provided with a vast assortment of goods for the afterlife.

Such goods would have been fitting for such a "luxurious" ruler. "Liu Fei admired daring and physical prowess. He built palaces and observation towers and invited to his court all the local heroes and strong men from everywhere around," wrote ancient historian Sima Qian (145-86 B.C.), as translated by Burton Watson. "His way of life was marked by extreme arrogance and luxury."

His burial chamber is divided into a series of corridors and small chambers. The chamber contained numerous weapons, including iron swords, spearheads, crossbow triggers, halberds (a two-handled pole weapon), knives and more than 20 chariot models (not life-size).

The archaeologists also found musical instruments, including chime bells, zither bridges (the zither is a stringed instrument) and jade tuning pegs decorated with a dragon design.

Liu Fei's financial needs were not neglected, as the archaeologists also found an ancient "treasury" holding more than 100,000 banliang coins, which contain a square hole in the center and were created by the first emperor of China after the country was unified. After the first emperor died in 210 B.C., banliang coins eventually fell out of use.

In another section of the burial chamber archaeologists found "utilities such as goose-shaped lamps, five-branched lamps, deer-shaped lamps, lamps with a chimney or with a saucer …." They also found a silver basin containing the inscription of "the office of the Jiangdu Kingdom."

The king was also provided with a kitchen and food for the afterlife. Archaeologists found an area in the burial chamber containing bronze cauldrons, tripods, steamers, wine vessels, cups and pitchers. They also found seashells, animal bones and fruit seeds. Several clay inscriptions found held the seal of the "culinary officer of the Jiangdu Kingdom."

Sadly, the king's coffins had been damaged and the body itself was gone. "Near the coffins many jade pieces and fragments, originally parts of the jade burial suit, were discovered. These pieces also indicate that the inner coffin, originally lacquered and inlaid with jade plaques, was exquisitely manufactured," the team writes.

A second tomb, which archaeologists call "M2," was found adjacent to the king's tomb. Although archaeologists don't know who was buried there it would have been someone of high status.

"The 'jade coffin' from M2 is the most significant discovery. Although the central chamber was looted, the structure of the jade coffin is still intact, which is the only undamaged jade coffin discovered in the history of Chinese archaeology," writes the team. 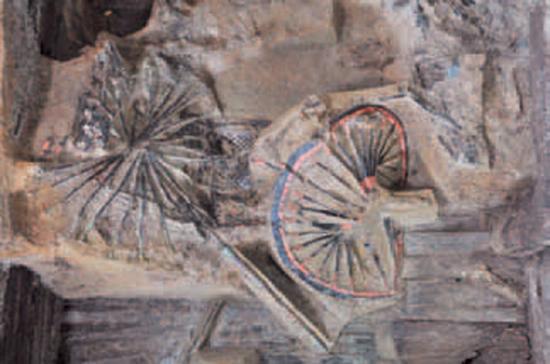 A chariot-and-horse pit, made of wood, lacquer, bronze, gold and silver, found in one of the pits in the mausoleum where archaeologists found the tomb of Liu Fei. Credit: Photo courtesy Chinese Archaeology

The second chariot pit contained about 50 model chariots. "Since a large quantity of iron ji(Chinese halberds) and iron swords were found, these were likely models of battle chariots," the team writes.

A series of 11 attendant tombs were found to the north of the king's tomb. By the second century B.C. human sacrifice had fallen out of use in China so the people buried in them probably were not killed when the king died.

Again, the archaeologists found rich burial goods. One tomb contained two gold belt hooks, one in the shape of a wild goose and the other a rabbit.

Another tomb contained artifacts engraved with the surname "Nao." Ancient records indicate that Liu Fei had a consort named "Lady Nao," whose beauty was so great that she would go on to be a consort for his son Liu Jian and then for another king named Liu Pengzu. Tomb inscriptions suggest the person buried in the tomb was related to her, the team says.

During the second century B.C. China was one of the largest, and wealthiest, empires on Earth, however, the power of its emperor was not absolute. During this time a number of kings co-existed under the control of the emperor. These kings could amass great wealth and, at times, they rebelled against the emperor.

About seven years after Liu Fei's death, the Chinese emperor seized control of Jiangdu Kingdom, because Liu Jian, who was Liu Fei's son and successor, allegedly plotted against the emperor.

The journal article was originally published, in Chinese, in the journal Kaogu, by archaeologists Li Zebin, Chen Gang and Sheng Zhihan. It was translated into English by Lai Guolong and published in the most recent edition of the journal Chinese Archaeology.