JERUSALEM - What is Beneath the Temple Mount? Part-3 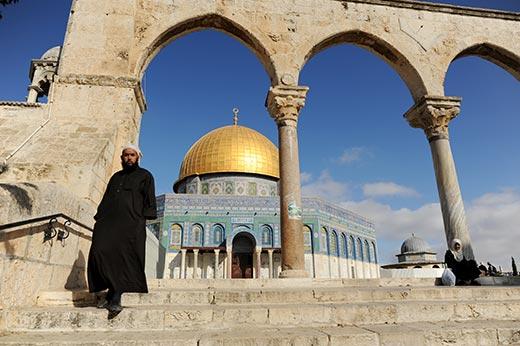 On the east side of the Temple Mount’s retaining wall, Meiron shows me the Golden Gate, an elaborate gatehouse and portal. Its provenance remains a subject of debate among historians, pitting the majority, who claim early Muslims built it, against those who insist it is a Byzantine Christian structure.

Historians who argue that the Byzantines didn’t build the gate point to ancient accounts describing how early Christians turned the Mount into a garbage heap. The Byzantines, scholars say, saw the destruction of the Second Temple as vindication of Jesus’ prophecy that “not one stone shall be left here upon another” and as a symbol of Judaism’s downfall. But other historians counter that the eastern entrance to the Mount, where the Golden Gate was built, was important to the Byzantines because their interpretation of the Gospel of Matthew holds that Jesus entered the Temple Mount from the Mount of Olives to the east when he joined his disciples for the Passover meal. And in A.D. 614, when the Persian Empire conquered and briefly ruled Jerusalem, they took back to Persia parts of the True Cross (believed to be the cross of the Crucifixion) from the Church of the Holy Sepulchre. Fifteen years later, after defeating the Persians, Heraclius, a Byzantine emperor, is said to have brought the True Cross back to the holy city—passing from the Mount of Olives to the Temple Mount, and then to the Holy Sepulchre. “Thus you had two triumphant entrances: Jesus and Heraclius,” says Meiron. “That’s enough to explain why the Byzantines would invest in building that gate.”

While Barkay is in the camp that believes the Golden Gate is an early Muslim structure, Meiron thinks the sifting project’s discovery of Byzantine-era crosses, coins and ornamental columns supports the theory that the gate was built by the Byzantines. “Now we’re not so sure the Temple Mount fell into disrepair,” Meiron says. In addition, Barkay has found archival photographs taken during renovations of the Al-Aqsa Mosque in the late 1930s that appear to reveal Byzantine mosaics beneath the structure—further evidence that some sort of public building had been constructed at the site.

I visited Barkay at his modest apartment in East Talpiot, a Jewish suburb of East Jerusalem. The grizzled, chain-smoking archaeologist was born in Budapest in 1944, the very day the Nazis sent his family to the city’s Jewish ghetto. After the war his father—who had spent a year in a Nazi forced labor camp in Ukraine—established the first Israeli delegation in Budapest, and the family emigrated to Israel in 1950. Barkay earned his doctorate in archaeology at Tel Aviv University. In 1979, exploring a series of ancient burial caves in an area of Jerusalem above the Valley of Hinnom, he made a remarkable discovery: two 2,700-year-old silver scrolls delicately etched with the priestly blessing that Aaron and his sons bestowed on the children of Israel, as mentioned in the Book of Numbers. Barkay describes the scrolls, which contain the earliest-known fragments of a biblical text, as “the most important find of my life.”

Barkay and I get into my car and drive toward Mount Scopus. I ask him about Natsheh’s charge that the sifting project is infused with a political agenda. He shrugs. “Sneezing in Jerusalem is an intensely political activity. You can do it to the right, to the left, on the face of an Arab or a Jew. Whatever you do, or don’t do, is political.”

Still, some criticism of Barkay stems not from politics but from skepticism about his methodology. Natsheh is not the only archaeologist to raise questions about the value of artifacts not found in situ. The dirt excavated by the Waqf is landfill from previous eras. Part of that landfill, Barkay says, comes from the Mount’s eastern section, which the Waqf paved over in 2001. But most of it, he says, was taken from vacant parts of the Mount when an entrance to Solomon’s Stables was blocked, sometime between the reign of the Fatimid and Ayyubid dynasties. Collectively, he says, the landfill includes artifacts from all periods of the site.

But Israeli archaeologist Danny Bahat told the Jerusalem Post that, since the dirt was filler, the layers do not represent a meaningful chronology. “What they did is like putting the remains in a blender,” adds Jerusalem region archaeologist Seligman about the Waqf excavation. “All the layers are now mixed and damaged.” Archaeologist Meir Ben-Dov, a specialist on the Old City, has raised doubts as to whether all the landfill even originated on the Temple Mount. Some of it, he suggests, was brought there from Jerusalem’s Jewish Quarter. 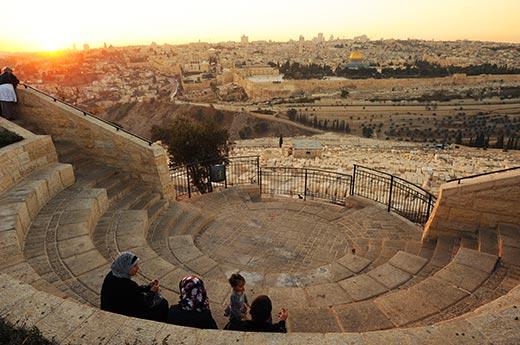 Barkay, not surprisingly, rejects this suggestion, citing the frequent finds of Ottoman glazed wall-tile fragments from the Dome of the Rock, dating back to the 16th century, when Sultan Suleiman the Magnificent repaired and beautified the shrine. And, though the excavated soil is not in situ, he says that, even if one were to discount the scientific value of the artifacts by 80 percent, “we are left with 20 percent, which is a lot more than zero.”

Barkay identifies and dates the artifacts through “typology”: he compares his finds with similarly made objects in which a timeline has been firmly established. For instance, the opus sectile pieces Barkay found in the soil were precisely the same—in terms of material, shape and dimensions—as those that Herod used in palaces at Jericho, Masada and Herodium.

We arrive at Barkay’s salvaging operation, and he greets a handful of staffers. Then he leads the way to a worktable and shows me a sampling of a single day’s efforts. “Here’s a bowl fragment from the First Temple period,” he says. “A Byzantine coin here. A Crusader arrowhead made of iron. This is a Hasmonean coin, from the dynasty that ruled Judah in the second century B.C.” Barkay tells me that volunteers by the hundreds arrive each week to help with the sifting—even ultra-Orthodox Jews, who traditionally oppose archaeological excavations in the Holy Land. “They say all the evidence is in the [scriptural] sources, you don’t need physical proof. But they’re willing to make an exception, because it’s the Temple Mount.” Barkay pauses. “If I look at some of the volunteers, and I see the excitement in their eyes, that they with their own fingers can touch the history of Jerusalem, this is irreplaceable.” He admits the project has attracted “very few” Palestinians or Arab Israelis.

Leading me outside the plastic-covered building, Barkay squints into the sunlight. We can see the Temple Mount in the distance, the sunlight glinting off the golden-topped Dome of the Rock. “We’ve been working for six years, and we’ve gone through 20 percent of the material,” he says, pointing to huge heaps of earth that fill an olive grove below the tent. “We have another 15 to 20 years to go.”