JERUSALEM - What is Beneath the Temple Mount? Part-2

To be sure, the Mount is a flash point in the Middle East conflict. Israel seized East Jerusalem and the Old City from Jordan in 1967. While Israelis saw this as the reunification of their ancient capital, Palestinians still deem East Jerusalem to be occupied Arab land (a position also held by the United Nations).The Temple Mount is precariously balanced between these opposing views. Although Israel claims political sovereignty over the compound, custodianship remains with the Waqf. As such, Israelis and Palestinians cautiously eye each other for any tilt in the status quo. A September 2000 visit to the Temple Mount by the Israeli politician Ariel Sharon was interpreted by Palestinians as a provocative assertion of Israel’s sovereignty, and helped spark the second intifada uprising, which, by some estimates, claimed as many as 6,600 lives, as rioting, armed clashes and terrorist bombings erupted throughout the Palestinian territories and Israel. At its core, the Israeli-Palestinian conflict represents rival claims to the same territory—and both sides rely on history to make the case for whose roots in the land run deepest.

For the Israelis, that history begins 3,000 years ago, when the Temple Mount—believed by many biblical scholars to be the mountain in the region of Moriah mentioned in the Book of Genesis—was an irregularly shaped mound rising some 2,440 feet among the stark Judean Hills. The summit loomed above a small settlement called Jebus, which clung to a ridge surrounded by ravines. The Old Testament describes how an army led by David, the second king of ancient Israel, breached the walls of Jebus around 1000 B.C. David then built a palace nearby and created his capital, Jerusalem. At the site of a threshing floor atop the mountain, where farmers had separated grains from chaff, David constructed a sacrificial altar. According to the Second Book of Kings and the First Book of Chronicles, David’s son, Solomon, built the First Temple (later known as the Beit Hamikdash) on that site. 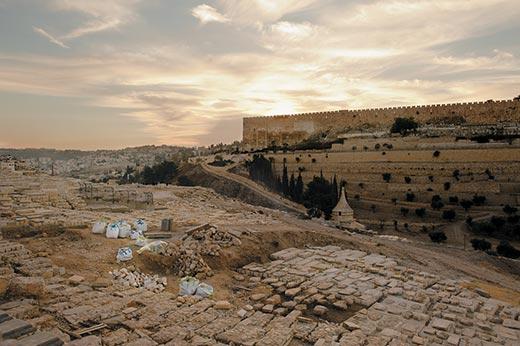 “The Temple Mount was the Parthenon of the Jews,” says Barkay, describing how worshipers would have climbed a steep set of stairs to get to it. “You would feel every step of the climb in your limbs and your lungs.”

Still, “we know nothing about the First Temple, because there are no traces of its physical remains,” says Benjamin Kedar, a history professor at Hebrew University and chairman of the board of directors at the IAA. Scholars, however, have pieced together a tentative portrait of the Beit Hamikdash from descriptions in the Bible and architectural remains of sanctuaries elsewhere in the region built during the same era. It is envisioned as a complex of richly painted and gilded courts, constructed with cedar, fir and sandalwood. The rooms would have been built around an inner sanctum—the Holy of Holies—where the ark of the covenant, an acacia-wood chest covered with gold and containing the original Ten Commandments, was said to have been stored.

Until recently, Palestinians generally acknowledged that the Beit Hamikdash existed. A 1929 publication, A Brief Guide to the Haram al-Sharif, written by Waqf historian Aref al Aref, declares that the Mount’s “identity with the site of Solomon’s temple is beyond dispute. This too is the spot, according to universal belief, on which David built there an altar unto the Lord, and offered burnt and peace offerings.” But in recent decades, amid the intensifying quarrel over the sovereignty of East Jerusalem, a growing number of Palestinian officials and academics have voiced doubts. “I will not allow it to be written of me that I have...confirmed the existence of the so-called Temple beneath the Mount,” Palestinian leader Yasir Arafat told President Bill Clinton at the Camp David peace talks in 2000. Arafat suggested the site of the Temple Mount might have been in the West Bank town of Nablus, known as Shechem in ancient times.

Five years after the Camp David talks, Barkay’s sifting project turned up a lump of black clay with a seal impression inscribed with the name, in ancient Hebrew, “[Gea]lyahu [son of] Immer.” In the Book of Jeremiah, a son of Immer—Pashur—is identified as chief administrator of the First Temple. Barkay suggests that the seal’s owner could have been Pashur’s brother. If so, it’s a “significant find,” he says—the first Hebrew inscription from the First Temple period to be found on the Mount itself.

But Natsheh—sipping Arabic coffee in his office at Waqf headquarters, a 700-year-old former Sufi monastery in the Muslim Quarter of the Old City—is dubious. He says he’s also frustrated by Israeli dismissal of Palestinian claims to the sacred compound where, he says, the Muslim presence—excepting the Crusader period (A.D. 1099-1187)—“extends for 1,400 years.” Natsheh won’t say if he believes in the existence of the First Temple, given the current political climate. “Whether I say ‘yes’ or ‘no,’ it would be misused,” he tells me, fidgeting. “I would not like to answer.”

According to contemporary accounts, the Babylonian Army destroyed the First Temple in 586 B.C. The ark of the covenant disappeared, possibly hidden from the conquerors. Following the conquest of Jerusalem by the Persians in 539 B.C., the Jews returned from exile and, according to the Book of Ezra, constructed a Second Temple on the site.

In the first century B.C., King Herod undertook a massive reshaping of the Temple Mount. He filled up the slopes surrounding the mount’s summit and expanded it to its present size. He enclosed the holy site within a 100-foot-high retaining wall constructed of limestone blocks quarried from the Jerusalem Hills and constructed a far more expansive version of the Second Temple. “Herod’s attitude was, ‘Anything you can do, I can do better and larger,’” says Barkay. “It was part of his megalomania. He wanted also to compete with God.”

Barkay says he and his co-workers have turned up physical evidence that hints at the grandeur of the Second Temple, including pieces of what appear to be opus sectile floor tiles—elements of a technique in Herod’s time that used stone of various colors and shapes to create geometric patterns. (Describing the temple, the ancient historian Jo­sephus wrote of an open-air courtyard “laid with stones of all sorts.”) Other discoveries might offer glimpses of daily religious rituals—notably ivory and bone combs that could have been used in preparation for a ritual mikvah, or purifying bath, before entering the courts’ sanctified interior.

On a cloudless morning, I join historian Meiron for a tour of the Temple Mount. We enter the Old City through the Dung Gate and then arrive at the Western Wall plaza. When the Romans destroyed Herod’s temple in A.D. 70, they knocked the retaining wall down piece by piece. But the stones from the top tumbled down and formed a protective barrier that preserved the wall’s lower portions. Today, hundreds of Orthodox Jews are gathered in devotion before the remnant of that wall—a ritual that perhaps first occurred in the fourth century A.D. and has been practiced continually since the early 16th century, after the Ottoman conquest of Jerusalem.

During the Ottoman Empire and the British Mandate, this area was a warren of Arab houses, and Jews who wanted to pray here had to squeeze into a 12-foot-wide corridor in front of the Herodian stones. “My father came here as a child and he told me, ‘We used to go through alleys; we entered a door; and there was the wall on top of us,’ ” Meiron tells me. After Israel claimed sovereignty over East Jerusalem in 1967, it demolished the Arab houses, creating the plaza.

Meiron and I climb a “temporary” wooden walkway that leads above the Western Wall to the Mughrabi Gate, the only entry point to the Temple Mount for non-Muslims—and a symbol of how any attempt to change the site’s geography can upset the delicate status quo. Israel erected the wooden structure after an earthen ramp collapsed in 2004, following an earthquake and heavy snowfall. In 2007, the IAA approved the construction of a permanent bridge that would stretch from the Old City’s Dung Gate to the Mughrabi Gate.

But members of both the Jewish and Muslim communities opposed the plan. Some Israeli archaeologists raised an outcry over the bridge’s proposed path through the Jerusalem Archaeological Park—the site of excavations conducted in the Old City—saying the construction could damage artifacts. The late Ehud Netzer, the archaeologist who discovered King Herod’s tomb in 2007, argued that moving the entrance ramp could effectively cut off the Western Wall’s connection to the Temple Mount, thereby undermining Israel’s claims to sovereignty over the sacred compound. And the Israeli activist group Peace Now warned the project might alarm Muslims since the new route and size of the bridge (three times the original ramp) would increase non-Muslim traffic to the Mount.

Indeed, when Israel began a legally required archaeological survey of the planned construction site, Palestinians and Arab Israelis joined in a chorus of protest. They claimed the Israeli excavations—although conducted several yards outside the walls of the sacred compound—threatened the foundations of the Al-Aqsa Mosque. Some even said that it was Israel’s covert plan to unearth remains of the First and Second Temples in order to solidify its historic claim to the Mount. For the time being, non-Muslim visitors continue to use the temporary wooden bridge that has been in place for seven years.

Such disputes inevitably send ripples throughout the international community. Both the Jordanian and Turkish governments protested Israel’s plans for the new walkway. And in November 2010, the Palestinian Authority created a diplomatic kerfuffle when it published a study declaring the Western Wall was not a Jewish holy site at all, but part of the Al-Aqsa Mosque. The study contended, “This wall was never part of the so-called Temple Mount, but Muslim tolerance allowed the Jews to stand in front of it and weep over its destruction,” which the U.S. State Department called “factually incorrect, insensitive and highly provocative.”

Today, the scene is calm. At various spots on the wide, leafy plaza Palestinian men gather in study groups, reading the Koran. We ascend steps toward the magnificent Dome of the Rock—which was built during the same period as the Al-Aqsa Mosque to the south, between A.D. 685 and 715. The Dome of the Rock is built on top of the Foundation Stone, which is sacred to both Jews and Muslims. According to Jewish tradition, the stone is the “navel of the Earth”—the place where creation began, and the site where Abraham was poised to sacrifice Isaac. For Muslims, the stone marks the place where the Prophet Muhammad ascended to the Divine Presence.