The traditional site of Golgotha, within the Church of the Holy Sepulchre. - (Bertrand Hauger)

On November 1, under the nave of the Lutheran Church of the Redeemer in Jerusalem, an archeological park called “Durch die Zeiten” (Through Time) opened. It provides the answer to a question that has long eluded researchers: just where Golgotha, the place where Jesus was crucified, buried and resurrected, is really located.

Planned and built under the aegis of the German Evangelical Institute for the Archeology of the Holy Land (DEI) in Jerusalem, the park offers a tour of the history of the holy city complete with models, 3-D animation and light effects.

DEI director Dieter Vieweger says that findings resulting from the research phase preceding the creation of the park support the generally accepted belief that the site of the Church of the Holy Sepulchre is where Golgotha or Calvary Hill were located.

Confusion about the issue cropped up in the 19th century, when biblical scholars pointed out that the place that John and other Evangelists described as the one where Jesus was crucified was not outside but inside Jerusalem city gates. This would also have gone against Jewish regulations according to which executions and burials had to take place outside city walls.

Then in 1893, archeologists unearthed a massive wall that even skeptics quickly accepted as the second wall of Jerusalem, as described by the historian Josephus. The wall was believed to date back to the time of King Herod the Great – and that appeared to validate the theory that Golgotha lay outside the walls that existed in Herod’s time (the city’s third wall was built later). 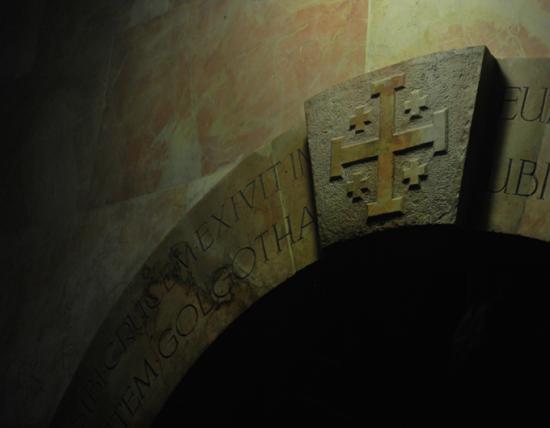 But this was thrown open to question in the 1960s when American researcher Kathleen Kenyon ascertained that the area surrounded by the so-called second wall was uninhabited at the time of Jesus’s crucifixion. This was followed in the 1970s by an even more dramatic discovery by then DEI director Ute Wagner-Lux: the second wall was on a site that had long been used as a stone quarry – which would fit the description of Golgotha. But what diggers found under the wall was a two-meter thick section of rubble from the city destroyed under military leader and later emperor Titus in 70 A.D.

Something he read by Christian historian Eusebius of Caesarea gave current DEI director Vieweger an idea. Eusebius wrote that some “godless” individuals seeking to erase all memory of Jesus’s burial place had erected a temple dedicated to Aphrodite on the site. This happened after the Bar-Kokhba Revolt of 132 - 135 A.D. when the Romans totally destroyed Jerusalem, and Emperor Hadrian built the city of Aelia Capitolina in its place, where Jews were forbidden to live under penalty of death.

At the center of this significantly larger city Hadrian had a temple of Venus (Aphrodite) erected. Eusebius’s account thus points to the Romans not only systematically trying to erase all trace of Jewish holy places but also those of the “other Jews” – the Christians.

But then what -- if the wall is part of a temple to Aphrodite -- led Emperor Constantine nearly 200 years later to erect the Church of the Holy Sepulchre on this spot?

Vieweger refers to a Christian source who, shortly after the Roman temple was built, records that Christ was killed at the heart of the city Hadrian built. Historians Hans-Joachim Gehrke and Peter Funke add a historic and religious argument that supports the traditional local belief: "Would Constantine, wishing to build a church on the site of Christ’s resurrection, have chosen a major Roman temple to do so if he’d had any alternative?" Constantine was anything but an iconoclast: It was later Roman emperors and others who razed pagan temples. The historians view this as conclusive evidence that the memory of Golgotha had thus survived over the space of several centuries.

So Golgotha was not right by the city wall built by Herod but most probably in a stone quarry that was filled in under Hadrian so he could erect his new city’s main temple. Historian Gehrke states that all presently known information, data, and writings support the thesis that the place where Jesus was executed and buried is where Constantine’s church is located. That would make John and other Evangelists right: Jesus died outside city gates.

All rights reserved ©Worldcrunch - in partnership with DIE WELT