Prof. Shimon Gibson says the huge stones near the Western Wall may have been caused by major earthquake in 363 B.E.

Information signs, tour guides, books and archaeologists explain that these stones fell to the street during the destruction of the Holy Temple, with the end of the Great Revolt in 70 C.E., and that they are the most palpable testimony to the destruction.

However, professor of archaeology Shimon Gibson suggests these walls stayed in place nearly 300 years after the destruction, and fell not by the hands of man but in a major earthquake that wracked Jerusalem in 363 C.E. He presented this thesis for the first time at Bar-Ilan University, Ramat Gan, last week, and the theory has aroused disputes among senior archaeologists.

Prof. Benjamin Mazar conducted the first digs to uncover the fallen stones, in the 1970s. There has been a consensus since then that the giant stones lying on the ground are from the destruction of the Holy Temple.

However, Gibson points to several problems with this explanation. First, we now know a lot more about life in Jerusalem after the destruction than we did in the ’70s. Recent archaeological digs taught us that Roman Jerusalem (which became known as Aelia Capitolina) was a functioning city with a rich population, sturdy homes, a commercial life and wide, elegant streets.

“Now we know much more about the late Roman period,” Gibson says. “If there was a neighborhood like this there, how could it be that they leave debris from the year 70 C.E. in the middle of it all? It’s like going out of your house and leaving a pile of debris. You clear it. And why leave the city to bring stones to build new buildings if you have stones next to your house?”

Next to the heaps of destruction, Mazar’s granddaughter, Eilat Mazar, uncovered a Roman-era bakery. “Who would buy bread in a place with damaged walls above it and fallen stones?” Gibson adds. “You don’t build next to a four-story ruin.” 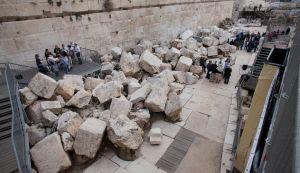 The stones at the southern end of the Western Wall. Earthquake or demolition job? Photo by Emil Salman

Gibson, a British-born archaeologist living in Israel, also points to the similarity in artisanship – comparing supporting pillars or other pillars that adorned the Temple Mount with the artisanship of those at the Church of the Holy Sepulchre, the Tomb of the Patriarchs and Mamre (near Hebron).

The three sites contain religiously important structures, which were built hundreds of years after the destruction. According to Gibson, the builders of these structures, at the beginning of the fourth century C.E., saw the Temple Mount walls and tried to imitate them, as part of the effort of Christianity at that time to prove that it was the successor of Judaism.

If the walls were destroyed in 70 C.E., asserts Gibson, how could the builders of 325 C.E. succeed in copying them, considering the fact that they did not have access to archaeological drawings or photographs? He concludes that the walls still stood hundreds of years after the destruction, and served as inspiration for the Roman builders.

Gibson also disagrees that the Roman legion would bother to destroy the stones in an expensive and complex engineering operation, after the Temple was already pillaged, burned to ashes and Temple Mount abandoned. Instead, he suggests another force at work to topple these walls.

The earthquake of 363 C.E. is well documented in Christian sources related to Jerusalem. It occurred during the rule of Julian the Apostate. Julian sought to restore the Roman Empire to the period before his uncle Constantine had made Christianity the state religion.

Julian encouraged renewed pagan worship, and also permitted the Jews to return and build a new temple. The Jews started rebuilding, but the powerful earthquake destroyed the foundations of the third temple and other places around the country. That earthquake caused considerable damage, as walls and entire buildings collapsed.

“Half of Jerusalem was destroyed during this earthquake,” says Gibson. “I suggest that the Temple Mount walls fell at the same time. The way the stones lie is also more consistent with an earthquake than destruction by man. I propose that perhaps the debris we see there are also from the destruction of 363 C.E.”

He also quotes historical sources describing the death of Jewish workers from stones that fell from Temple Mount. While these sources undoubtedly have a theological interest in describing the ruin, there is no disputing that, in that same year, an especially powerful earthquake rocked the land.

Prof. Ronny Reich, who was a partner in the original Southern Wall digs in the 1970s and ran the excavations in the ’90s together with Prof. Yaakov Billig, vehemently rejects Gibson’s theories.

Other side of the coin

“It doesn’t hold water,” he states. Reich’s strongest evidence against the theory is a layer of mud or dirt several centimeters thick, which was discovered underneath the fallen stones.

‘The rockslide doesn’t lie on the street. It lies on a layer of sediment 3-5 centimeters thick,” he says. “We cleaned this layer very exactingly, and we found 120-125 coins. It is sediment that collected on the street after it went out of use and before the collapse – I suppose in the first winters after the destruction. The last coin we found is from the fourth year of the rebellion, that is to say 69 C.E. If Gibson is right, could it be that for 290 years, no other coins were collected under the pile of stones? What happened between 70 and 363?”

Reich does not assert that legionnaires destroyed the wall immediately after the destruction of the Temple but perhaps a few years later, even in honor of the visit of Emperor Hadrian in 130 C.E. But he is sure they did not stay standing through the fourth century.

“Size matters in archaeology,” says Reich about the earthquake. “It’s true buildings collapse, but you are talking about the walls of Temple Mount. That’s not just another structure.”

Yet Gibson is not convinced. The coins, according to him, could have rolled underneath the rubble in various ways. For example, builders who wanted to level the road in a later period might have brought dirt from elsewhere, or perhaps the stones were moved and rearranged so they could be employed for secondary use.

Sometimes in archaeology, he says, there are ideas that need to be raised to rethink things. “We all accepted as gospel that these stones fell in the year 70, and I don’t want to remove from anyone the symbolism of these stones. But I have an interest in the historic, substantive side,” he says. “I tried to convince myself that I am wrong because the heart wants it to be the year 70, but it goes against reason. The goal is that people start to think about it – and if I am wrong, then I am wrong. Life will go on.”