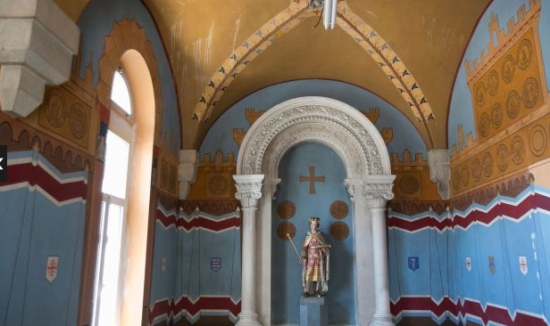 The room that was used as a storeroom. Other paintings by de Piellat were discovered while reorganizing it.Olivier Fitoussi

The Saint Louis French Hospital is an unusual institution in Jerusalem, a city replete with unusual institutions. It was built at the end of the 19th century near the New Gate in the Old City wall, not far from the present-day City Hall. For several decades it has been serving as a hospice run by the Sisters of St. Joseph Catholic nuns.

The building contains a magnificent church, with crosses and statues of Jesus on its walls. However, in a prominent place near the entrance there is also a kashrut certificate. Among the patients are Christians, Muslims and Jews, some of them ultra-Orthodox.

Some of the hospital’s and Jerusalem’s history came to light recently following a burst water line which required the emptying out of a storeroom. Repair work exposed some additional wall paintings that had decorated the structure from the time it was built. The nuns subsequently emptied the rest of the storeroom, which lay alongside the main building, in order to expose the rest of the wall paintings. These paintings, restored with the help of the Israel Antiquities Authority, were shown to the media on Tuesday.

The paintings were by the French count Marie Paul Amedee De-Piellat, a deeply religious and wealthy Christian intellectual who established the French area across from the New Gate. Construction in this area was carried out in the context of the power struggle between the colonial empires over Jerusalem in the second half of the 19th century. According to the Antiquities Authority Jerusalem District archaeologist Amit Reem, De-Piellat saw himself as the “last Crusader” who would salvage the city’s honor, mainly combating the Russian Orthodox Church which was at that time gaining the upper hand over the Catholic French in the bid for land in Jerusalem. The location of the hospital was chosen since it was identified as the place on which stood the camp of the heroic knight of the first crusade, the Norman prince Tancred.

De-Piellat’s identification with the crusaders is evident on the walls of the hospital he built. All the drawings deal with the Crusades, showing the flags and coats-of-arms of various knights, the symbols of military and religious orders, a drawing of Jerusalem on the day it was conquered by the Crusaders, Crusader warriors and more.

Researcher Zvi Shilony, who has investigated the French area of the city, says in an article he published that De-Piellat emphasized French warriors and symbols in his drawings over other European Crusaders.

During World War I the Ottoman army seized the building and converted it into a military hospital. They covered the Christian drawings with black paint. When the city was captured by the British, De-Piellat returned at the end of his days and spent his last years peeling off the black paint and restoring his paintings. He died in 1925 in the hospital he had built, and was eulogized by the poet Louis Breton as “the last magnificent knight, who exchanged his sword for a monk’s robe.”

The wall paintings were known to historians of Jerusalem, but lately it turned out that they covered much more space than was previously realized. Some had been covered in paint over the years. Even though by law the paintings are not considered antiquities, the Antiquities Authority assisted in their restoration. The nuns are now looking for funds to be used for further exposure of these paintings.