Challenging accepted tradition, some researchers have proposed a controversial new perspective on Jerusalem’s ancient Temple Mount and the location of the temple that was central to Israelite and Judahite worship in biblical times.

For hundreds of years, the long-accepted traditional location of the temple of Solomon and the later Second Temple expanded upon by Herod the Great in Jerusalem has placed them within the precinct that now contains the famous Haram al-Sharif (Dome of the Rock), otherwise known as the “Noble Sanctuary”. It has been a sacred space for three major world religions for centuries.

In recent years, however, some scholars have challenged the traditional view. Not without controversy, they have revolved their arguments around what they consider to be a misreading or dismissal of the literature by Josephus and others regarding the size and location of Fortress Antonia, the Roman enclave in 1st century Roman-occupied central Jerusalem that represented the might of Rome in the otherwise troublesome (for the Romans) province of Judaea.

Most recently, researcher and author Marilyn Sams has advanced the argument that Fortress Antonia, represented by tradition as a monumental or castle-like structure located during Herodian times just north of the Second Temple on the periphery of the large rectangular temple precinct, was actually a much larger complex, more akin to the typical standard Roman fortress layout that existed during the time of 1st century Jerusalem, the time of Jesus. The actual size and nature of this alternative model for Fortress Antonia, she argues, would have encompassed the area most scholars and historians have identified with the temple precinct. She bases her argument at least in part on the descriptions recorded by Josephus and others.

“Josephus described it [the fortress] as being “erected upon a rock of fifty cubits in height” on a “great precipice,” Sams quotes Josephus.  “It had “all kinds of rooms and other conveniences, such as courts, and places for bathing, and broad spaces for camps, such that it had all the conveniences of cities and seemed like it was composed of several cities.”   With 60-foot walls, four towers (the southeast being 105 feet high), and smooth stones covering the slope on its east side, it dominated the temple to its south, ready to fend off the most formidable attacks.”

Given this description, according to Sams, tucking Fortress Antonia north of the temple location in the Temple Mount area subscribed to by most scholars would have been impossible. It simply wouldn't fit. 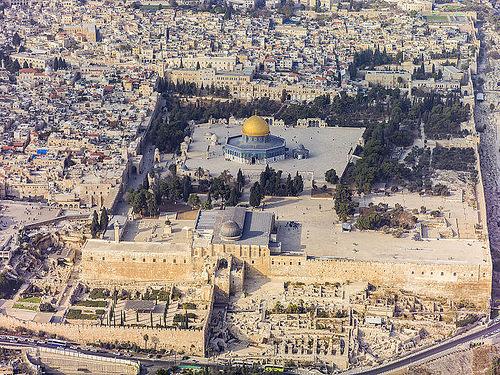 The "Temple Mount" precinct as it appears today. Andrew Shiva, Wikimedia Commons
Moreover, Sams cites the insufficiency or paucity of archaeological evidence for the traditional concept of the Fortress Antonia near the area at the northern periphery location of the Temple Mount, and points to the more abundant evidence unearthed in other locations nearer to the current, traditionally accepted temple location, suggesting that this supports the much larger Roman encampment concept consistent with the standard Roman fortress model of 1st century times.

“……Roman military structures and artifacts are mostly found near and under the “Temple Mount,” she writes. “Excavations by Benjamin and Eilat Mazar at the southwest corner have revealed a Roman bakery and further north, a Roman bath house………… Excavations to the south and along the western and eastern walls, as well as the sifting project, have yielded column and capital fragments; fragments of Roman marble statues, inscribed stones….. pottery and stone vessels; bullas (Roman amulets); stone seals, several thousand coins, and more.”

Sam’s arguments have been built on the foundations of research by earlier scholars, most notably that of Dr. Ernest L. Martin, whose research and subsequently published book, The Temples that Jerusalem Forgot, also argued that Fortress Antonia actually encompassed the area traditionally ascribed to the Temple Mount and that the temple was more accurately located on the Ophel mound over the area of the Gihon Spring, in the old City of David to the immediate southeast of the traditional Temple Mount precinct. “When Aristeas (the Greek writer) claims there was a natural spring under the temple, this can be compared with the lack of a known spring under the traditionalist “Temple Mount,” states Sams in concurrence with Martin. And “when Eusebius says the temple site became a garbage dump, this can be compared with the lack of such findings under the “Temple Mount,” while many garbage sites have been uncovered on the southeastern hill [near to the Ophel],” continues Sams……and “when Josephus describes the foundations [of the temple] as starting in the Kidron Valley and ending as a four-furlong square 450 feet high, this can be compared with the 922 by 1596 by 1040 by 1556-foot measurements of the [traditionally accepted] “Temple Mount” trapezoid, whose maximum height is 158 feet, upslope from the Kidron Valley.”

In short, Fortress Antonia was much bigger than most scholars have previously thought, and the First and Second Temples, the center of Israelite and Judahite worship in biblical times, were built in the City of David on the Ophel above the Gihon Spring, the area where Jerusalem under King David and the United Monarchy of the biblical account had its beginnings. 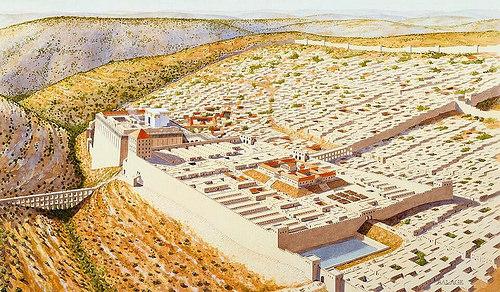 The proposed premise, depicted above by noted biblical illustrator Balage Balough, shows the massive Fortress Antonia looming over the Second Temple, placed over the Gihon Spring in the City of David. To the north of the Fortress is the Birket Israel, the former Struthion Pool. Courtesy Balage Balough and Bob Ellsworth
To be sure, Sams and Martin’s proposals have drawn criticism from other scholars, particularly those who subscribe to the mainstream view. But Sams remains hopeful that her theory will prevail. “Only time will tell if the existing and growing evidence will be sufficient to overturn the prevailing tradition,” says Sams.

A more detailed article on the subject by Sams will be released as a viewpoints article beginning in the winter (December) 2015 issue of Popular Archaeology magazine in a two-part series.