Jerusalem (Israel): Tombs of the Kings of Judah ?:

An Answer to Hershel Shanks's Question 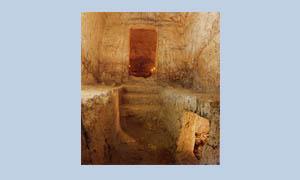 In a 1987 issue of BAR, Hershel Shanks 1 presented a summary of Amos Kloner’s 2 1986 article published in the journal Levant in which the Israeli archaeologist argues that the burial caves at the Dominican Monastery in Jerusalem are the tombs of the last kings of Judah and their families. The title of Shanks’s article was in the form of a question: “Have the Tombs of the Kings of Judah Been Found?”

I hope to answer his question.

The suggestion made by Kloner had been previously considered and rejected well before his article of 1986—by Vincent,3 Avi-Yonah4 and Benoît5—and even after his publication—by Wightman6 and Küchler.7 Still, in a 2007 publication we find the following assertion about the Dominican Monastery tombs: “The present authors assume that these are royal tombs that served the last members of the Davidic dynasty and their families. This site can be also identified with the Biblical garden of Uzza—the burial place of the last kings of the House of David.”8

So have the tombs of the kings of Judah been found? After more than 20 years, Shanks deserves a direct, clear answer to his question!

First of all, let us consider the main argument of Kloner’s hypothesis, namely what Flavius Josephus wrote about the Third Wall:

“The third [wall] began at the tower of Hippicus, whence it stretched northwards to the tower Psephinus, and then descending opposite the monuments of Helena (queen of Adiabene and daughter of King Izates), and proceeding past the royal caverns it bent round a corner tower over against the so-called Fuller’s tomb and joining the ancient rampart terminated at the valley called Kedron.”9

In place of the words “royal caverns” in this text Kloner has “burial caves of the kings,” translating the Greek word spelaion as “burial cave,” following what he understands to be a possible translation given by the dictionary of Liddell and Scott.10 In fact, this dictionary translates spelaion as “grotto” or “ cavern” and adds “grave” for only three examples: two inscriptions from the first and second centuries A.D. of tombs in Palmyra, and the Gospel of John 11:38.

In the last example, following the interpretation of Brown11 and Moloney,12 spelaion has to be translated as “cave,” as in the NET: “Jesus, intensely moved again, came to the tomb. (Now it was a cave, and a stone was placed across it.)” (John 11:38).

Similarly, in both inscriptions from Palmyra13 spelaion is accompanied by words related to the concept of tomb, namely mnemeion and tapheion.14 This means that, in all three examples given by Kloner as supporting his translation of Josephus’s text, the word spelaion is never used alone to denote a burial site. When spelaion is associated with another word that implies a burial place, it simply gives the type of tomb, specifically a grotto or cavern. Spelaion alone, as in Josephus’ text, never means “burial cave.”

Furthermore, returning to Josephus, if we consider the meaning of spelaion in his entire work, we discover that the other 41 occurrences of this word are all, and without any doubt, related to a grotto, a cavern or a cave, and never to a sepulchre or a tomb.15

In fact, when Josephus refers to sepulchres in his texts he uses other words: taphos, which means “tomb” or “sepulchre,” mnemeion or mnema, which mean “monument” or “tomb,” and theke,16“coffin” or “sheath,” especially when he mentions the tombs of the kings of Judah.17

Another issue of the Josephus text is raised when we consider that in the same passage of The Jewish War he refers to two other sepulchres, those of Queen Helena and of the Fuller. It seems very strange that for such important monuments as the kings’ tombs Josephus should use such an unusual word.

If we also take into consideration: (1) the fact that the description of the Third Wall given by Josephus is inconsistent to the point that until today two very different topographical interpretations are given to the actual line of this fortification,18 (2) that in the Slavonic translation of Josephus’s book,19 wherespelaion is translated “ cavern,” the description given of the Third Wall is very different, then we have to dismiss the hypothesis of Kloner. In fact, the “royal caverns” of Josephus may be Solomon’s quarry, called also Zedechias’s cave, as several scholars have proposed.20

Moreover, if we consider the Biblical texts used by Kloner to suggest that the garden of Uzza is on the property of the Dominican Monastery, as well as the tombs of the last kings of Judah, we discover that King Manasseh, his son Amon (2 Kings 21:26) and probably his grandson Josiah (2 Chronicles 35:24) were buried in the garden of the palace of Manasseh (2 Kings 21:18=2 Chronicles 33:20). Yet, in the whole area north of the Damascus Gate no Iron Age II buildings have been found. In fact, according to Kloner himself, this area was a burial area until the time of Agrippa I, between 41 and 44 A.D. Finally, it seems very strange that King Manasseh built his palace in an unprotected region so far from the Temple and from the City of David, and moreover, in a burial zone. Actually, according to Barkay the garden of Uzza and the tombs of the kings of Judah were probably located on the western hill of Jerusalem or on its slopes, 21 or outside the wall of the City of David, as Na’aman assumes.22

Now we can come back to the conclusion of Shanks’s article: “If Kloner is right, these magnificent First Temple period burial caves on the grounds of the École Biblique were known in Josephus’s time as the ‘royal burial caves,’ and very likely they once sheltered the bones of the later kings of Judah.”23

In fact, we have shown that Kloner is not right. So we can answer Shanks’s question with no hesitation: The tombs of the last kings of Judah have not yet been found, because the tombs of the Dominican Monastery in Jerusalem are not the sepulchres of the last kings of Judah. If we want to find these tombs, according to the Bible, we have to look in the southern part of Jerusalem.24

21. Cf. Gabriel Barkay, “On the Location of the Tombs of the later Kings of the House of David”, in M. Broshi, ed., Between Hermon and Sinai: Memorial to Amnon Binyaminovitz, Studies in History, Archaeology and Geography of Eretz Israel (Jerusalem: Private publication, 1977), pp. 75—92 (Hebrew)

Fr. Riccardo Lufrani is professor of topography of Jerusalem and Southern Levant at the École Biblique et Archéologique Française in Jerusalem.