The Hebrew University of Jerusalem 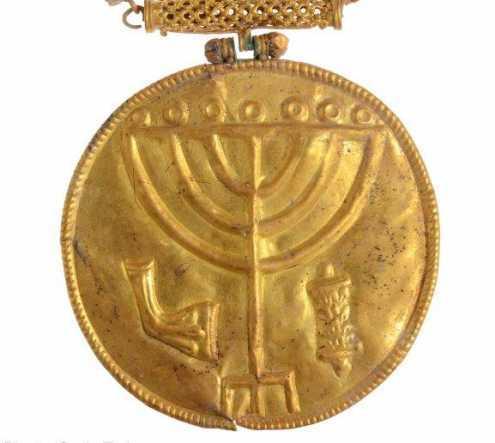 A 10-cm gold medallion discovered in Hebrew University excavations at the foot of the Temple Mount in Jerusalem. Etched into the medallion are a menorah (Temple candelabrum), shofar (ram’s horn) and Torah scroll. (Photos by Ouria Tadmor)

In summer excavations at the foot of the Temple Mount, Hebrew University of Jerusalem archaeologist Dr. Eilat Mazar made a stunning discovery: two bundles of treasure containing thirty-six gold coins, gold and silver jewelry, and a gold medallion with the menorah (Temple candelabrum) symbol etched into it. Also etched into the 10-cm medallion are a shofar (ram’s horn) and a Torahscroll.

A third-generation archaeologist working at the Hebrew University’s Institute of Archaeology, Dr. Mazar directs excavations on the City of David’s summit and at the Temple Mount’s southern wall. Calling the find “a breathtaking, once-in-a-lifetime discovery,” Dr. Mazar said: “We have been making significant finds from the First Temple Period in this area, a much earlier time in Jerusalem’s history, so discovering a golden seven-branched Menorah from the seventh century CE at the foot of the Temple Mount was a complete surprise.”

The discovery was unearthed just five days into Mazar’s latest phase of the Ophel excavations, and can be dated to the late Byzantine period (early seventh century CE).  The gold treasure was discovered in a ruined Byzantine public structure a mere 50 meters from the Temple Mount’s southern wall.

The menorah, a candelabrum with seven branches that was used in the Temple, is the national symbol of the state of Israel and reflects the historical presence of Jews in the area. The position of the items as they were discovered indicates that one bundle was carefully hidden underground while the second bundle was apparently abandoned in haste and scattered across the floor.

Given the date of the items and the manner in which they were found, Mazar estimates they were abandoned in the context of the Persian conquest of Jerusalem in 614 CE. After the Persians conquered Jerusalem, many Jews returned to the city and formed the majority of its population, hoping for political and religious freedom. But as Persian power waned, instead of forming an alliance with the Jews, the Persians sought the support of Christians and ultimately allowed them to expel the Jews from Jerusalem. 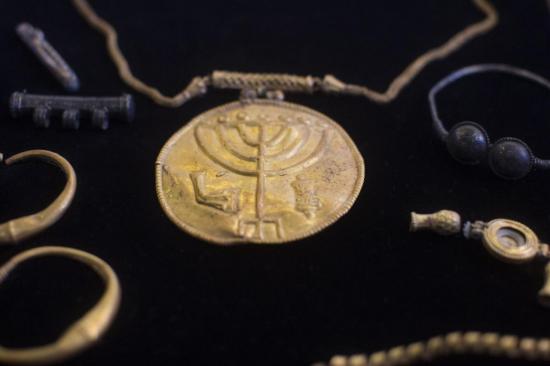 “It would appear that the most likely explanation is that the Ophel cache was earmarked as a contribution toward the building of a new synagogue, at a location that is near the Temple Mount,” said Dr. Mazar. “What is certain is that their mission, whatever it was, was unsuccessful. The treasure was abandoned, and its owners could never return to collect it.”

The Ophel cache is only the third collection of gold coins to be found in archaeological excavations in Jerusalem, said Lior Sandberg, numismatics specialist at the Institute of Archaeology.  “The thirty-six gold coins can be dated to the reigns of different Byzantine emperors, ranging from the middle of the fourth century CE to the early seventh century CE,” said Sandberg.

Found with the coins were a pair of large gold earrings, a gold-plated silver hexagonal prism and a silver ingot. Remnants of fabric indicated that these items were once packaged in a cloth purse similar to the bundle that contained the menorah medallion.

Mazar’s Ophel excavation made headlines earlier this year when she announced the 2012 discovery of an ancient Canaanite inscription (recently identified as Hebrew), the earliest alphabetical written text ever uncovered in Jerusalem.

The 2013 excavation season at the Ophel ran from the middle of April to the end of July, on behalf of the Institute of Archaeology of the Hebrew University. The Israel Antiquities Authority is carrying out the preservation works, and is preparing the site for the public. The excavation site is situated within the Jerusalem National Park around the walls of Jerusalem of the Israel Nature and Parks Authority, and is administered by the East Jerusalem Development Company.

The Ophel project has been generously underwritten, since 2009, by Daniel Mintz and Meredith Berkman from New York. The entire project includes the archaeological excavations, the processing of the finds towards publication, as well as the preservation and the preparations of the site for its opening to the public.