Jerusalem (Israël): Canaanite Fortress Discovered in the City of David 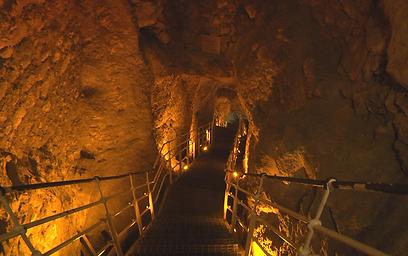 A massive 3,800-year-old fortress that protected the Gihon Spring was uncovered in the City of David.Photo: Eli Mandelbaum, courtesy of the Israel Antiquities Authority.

Excavations around the Gihon Spring in the City of David have uncovered a massive 3,800-year-old fortress. Called the “Spring Citadel” by archaeologists, the discovery is part of a 15-year excavation led by Professor Ronny Reich of the University of Haifa and Eli Shukrun of the Israel Antiquities Authority.

This enormous 18th-century B.C.E. structure that isolates and protects the Gihon Spring is believed to be the fortress described in the Book of Samuel that King David conquered:

The king and his men marched to Jerusalem against the Jebusites, the inhabitants of the land, who said to David, “You will not come in here, even the blind and the lame will turn you back”—thinking, “David cannot come in here.” Nevertheless, David took the stronghold of Zion, which is now the city of David. (2 Samuel 5:6–7).

The Gihon Spring was also the site where King Solomon was crowned, according to the Book of Kings:

King David said, “Summon to me the priest Zadok, the prophet Nathan, and Benaiah son of Jehoiada.” When they came before the king, the king said to them, “Take with you the servants of your lord, and have my son Solomon ride on my own mule, and bring him down to Gihon. There let the priest Zadok and the prophet Nathan anoint him king over Israel; then blow the trumpet, and say, “Long live King Solomon!”  (1 Kings 1:32–34).

According to Oriya Dasberg, director of development in the City of David, “The Spring Citadel was built in order to save and protect the water of the city from enemies coming to conquer it, as well as to protect the people going down to the spring to get water and bring it back up to the city.”

Read more about the Canaanite fortress uncovered at the Gihon Spring.