The Babylonian destruction layer in the City of David is the dark bit with bits of embedded pottery around the middle of the picture. Eliyahu Yanai, Courtesy of the City of David Archive
A bizarrely uneven but unmistakable destruction layer dating from the Babylonian conquest of Jerusalem in 586 B.C.E. has been found by archaeologists digging in the City of David, at the foot of the Old City of Jerusalem. The layer was found inside houses that had been built outside the city walls, indicating that sixth-century B.C.E. Jerusalem extended beyond the fortifications.
The layer was found inside a number of stone buildings on the lower slopes of the City of David, basically just downhill from the entrance to Warren's Shaft, Dr. Joe Uziel, excavation director for the Israel Antiquities Authority, told Haaretz.
"Jerusalem is known for two major destructions in its early history. One was in 586 B.C.E., when the Babylonians destroyed the city. The other was in the year 70 C.E., when the Romans destroyed Jerusalem," Uziel says.
Much evidence indicates that the destruction layer, with ash and collapsed layers of stone, dates to the Babylonians some 2,600 years ago, rather than to the Romans 2,000 years ago. A key piece is iconic rosette shapes stamped onto the handles of pottery storage jars: dozens of shattered jars were found at the site. That provides a very tight range of dates. (It also attests possibly to the violence of the time.)
"Rosette handles date to a very short time period, right up to the Babylonian destruction in 586 B.C.E.," Uziel says, adding, "We find rosette handle stamps whenever we find Babylonian destruction levels in the early sixth century B.C.E."

The earliest known jar-handle stamps date to the time of King Hezekiah in the late eighth century B.C.E. These stamps included the ancient Hebrew letters lamed, mem, lamed and kaf, and the name of one of four cities associated with Judah. They have become known as "LMLK seals" ("to the king" or "for the king").

Jug handles with the rosette seal used by the administrative system at the end of the Judean Kingdom in the seventh century B.C.E.. Eliyahu Yanai, Courtesy of the City of David Archive
"Many link the LMLK handles to preparations prior to the arrival of the Assyrian army, which managed to conquer Judah in 701 B.C.E., but not Jerusalem. LMLK handles began to appear right before that," Uziel explains. 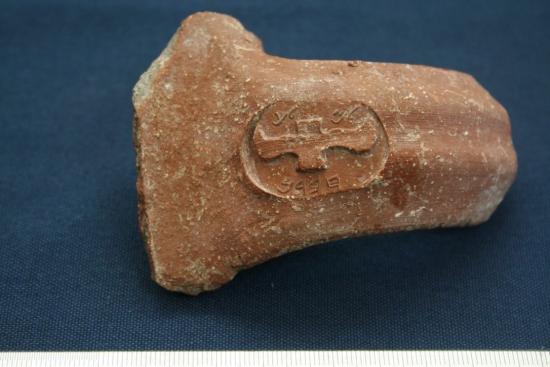 A LMLK stamped handle from Ramat Rahel, by Jerusalem; the inscription reads "to be sent to the king / belonging to the king, Hebron" Oded Lipschits
In any case, after the Assyrian onslaught, the LMLK handles disappeared, following which rosette handles began to show up, replacing the LMLK system – until the Babylonian destruction. And now a bunch have been found in this destruction layer in Jerusalem. (After the Babylonian destruction, other stamp seals began to appear on jar handles in the place of the rosettes.)
By the way, the jars had been used to store both liquids and grains, say the archaeologists, given that modern techniques enable analysis of a jar's ancient content, if any residue is left.
Ivory statuette of naked woman
The archaeologists also found a small ivory statue of a woman, an extremely rare discovery. The figure is naked and her haircut or wig is Egyptian in style, they say, adding that the quality of the workmanship is high.

Closeup of female statuette found in destruction layer in City of David Clara Amit, Israel Antiquities Authority
Intriguingly, the destruction layer the archaeologists found varies in thickness, from as much as a meter in what seems to have been a storage room for jars, to practically indiscernible. Why would the signs of mayhem be so glaring in some areas, and almost nonexistent in others?
"We think the Babylonians didn’t burn each and every building." Uziel says. "The process may have been to destroy certain points they didn't have to destroy every single building in order to destroy Jerusalem."
In the excavations – concentrated on the eastern slope of the City of David – structures dating to more than 2,600 years ago have been unearthed after having been covered over by collapsed layers of stone.
Within the destruction layer, the excavators found charred wood, grape seeds, pottery, fish scales and bones as well. Carbon-14 dating with the help of the Weizmann Institute is in process.
It bears adding that the adoption of carbon-dating in Jerusalem archaeology has been glacial, though people have been excavating the city for a century and more and the technology is hardly new. Finally, though, it is being used. It's a process, Uziel admits, adding, "In recent years we have made large effort, the Israel Antiquities Authority and the universities, to bring Jerusalem to the methods of 21st century archaeology."