History records the siege of Jerusalem 2,000 years ago, but archaeologists never have found evidence of the famine that plagued Jews – until now. 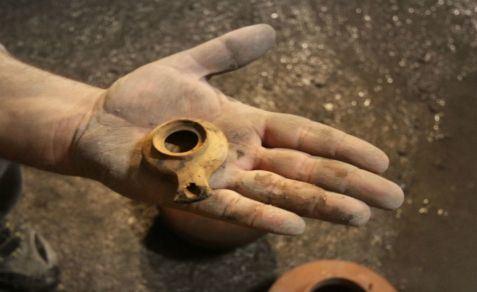 This small ceramic lamp was probably used by Jews hiding in the Great Revolt during the siege of Jerusalem 2,000 years ago  - Photo Credit: IAA; Vladimir Naykhin

Archaeological excavations near the Western Wall have unearthed three complete cooking pots and a small ceramic oil lamp that are the first pieces of evidence of the Jewish famine during the revolt during the siege of Jerusalem 2,000 years ago.

The Israel Antiquities Authority is digging up history in excavations of the drainage channel that runs from the Shiloah Pool in the City of David to Robinson’s Arch, at the southern end of the Western Wall.

“This is the first time we are able to connect archaeological finds with the famine that occurred during the siege of Jerusalem at the time of the Great Revolt,” said excavation director Eli Shukrun.

The complete cooking pots and ceramic oil lamp, discovered inside a small cistern in a drainage channel, indicate that the people went down into the cistern where they secretly ate the food that was contained in the pots, without anyone seeing them, and this is consistent with the account provided by Josephus,” he explained.

In his book “The Jewish War,” Josephus describes the Roman siege of Jerusalem and in its wake the dire hunger that prevailed in the blockaded city.

In his dramatic description of the famine in Jerusalem he tells about the Jewish rebels who sought food in the homes of their fellow Jews in the city. Josephus said that the Jews concealed the food they possessed for fear it would be stolen by the rebels, and they ate in hidden places in their homes.

“As the famine grew worse, the frenzy of the partisans increased with it…. Nowhere was there corn to be seen, men broke into the houses and ransacked them. If they found some, they maltreated the occupants for saying there was none; if they did not, they suspected them of having hidden it more carefully and tortured them,” Josephus wrote.

“Many secretly exchanged their possessions for one measure of corn-wheat if they happened to be rich, barley if they were poor. They shut themselves up in the darkest corners of the their houses, where some through extreme hunger ate their grain as it was, others made bread, necessity and fear being their only guides. Nowhere was a table laid…”