Pilgrims came from hundreds of miles away to sacrifice animals at an ancient temple in Jerusalem, new research suggests.

An analysis of bones found in an ancient dump in the city dating back 2,000 years revealed that animals sacrificed at the temple came from far and wide.

"The study shows that there is a major interprovincial market that enables the transfer of vast numbers of animals that are used for sacrifice and feasting in Jerusalem during that time period," said study co-author Gideon Hartman, a researcher at the University of Connecticut.

The finding, published in the September issue of the Journal of Archaeological Science, confirms visions of the temple depicted in historical Jewish texts and suggests the economic heart of the city was its slaughtering operation. 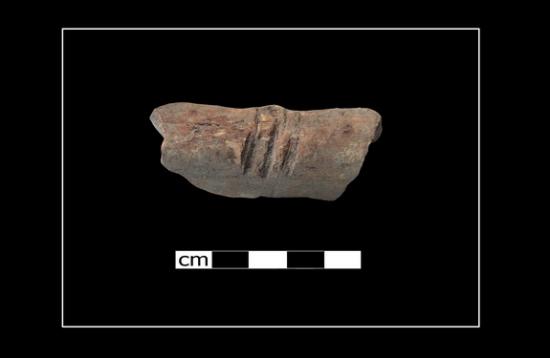 The sheep and goat bones showed cut marks, clear signs of butchery, indicating that the animals were used for meat consumption. Historically, whatever parts of the animal weren't sacrificed as a burnt offering were eaten in feasts. Credit: Vladimir Naikin

At the time, Jerusalem was a bustling metropolis without any natural economic resources, as it was landlocked and far from most major trade routes.

According to the Talmud, a Jewish religious text, the city's economic heart was the Holy Temple, the only place where Israelites could sacrifice animals as offerings to God. Parts of the animal that weren't sacrificed as a burnt offering were often left for people to feast on.

Some passages in the text depict priests wading up to their knees in blood, and others describe 1.2 million animals being slaughtered on one day. And the ancient Jewish historian Flavius Josephus also describes an enormous slaughtering operation.

But historians wondered whether these descriptions were hyperbole or fact.

A few years ago, archaeologists unearthed a massive dump on the outskirts of the old walled city of Jerusalem. Dating revealed the dump was used between the start of King Herod's reign in 37 B.C. and the Great Revolt in A.D. 66. [See Images of the Massive Bone Dump ]

Whereas most city dumps contain animal bones, this one contained an unusually large proportion of them for an agricultural society, Hartman said.

"Meat was not eaten on a daily basis. It was something that was kept for special events," Hartman told LiveScience.

What's more, most of the animals were young, suggesting they were raised for sacrifice.

Hartman analyzed nitrogen and carbon isotopes, or atoms of the same element with a different number of neutrons, from about 160 sheep and goat bones found in the city dump. He then compared the bones from the city dump with bones from the same time period taken from animals that were raised both nearby and in distant locales.

In addition, an analysis of the chemical isotopes, or elements with different numbers of neutrons, in the bones revealed that they came from far-flung, rural desert locations distant from Jerusalem. Credit: Vladimir Naikin

All animals incorporate unique ratios of nitrogen and carbon isotopes from their environment into their body from the food they eat, so isotope analysis can reveal where animals came from.

The study found that many of the animals found in the city dump came from rural desert regions hundreds of miles away, such as Arabia or Transjordan.

The discovery bolsters the notion that Jerusalem was supported by a massive economy of pilgrims who brought animals for slaughter.

After the first temple was destroyed in 586 B.C., the Israelites eventually rebuilt a second temple, but by then many Jews were scattered from Asia Minor to Europe. (The First Temple period refers to the time after the first temple was built until it was destroyed, while the Second Temple period refers to the lifetime of the second temple.)

"There are strong and wealthy Jewish populations during the time of the second temple that are established far away from the land of Israel," Hartman said.

Those people were still religiously required to sacrifice animals, which could only be done in Jerusalem.

So representatives from distant Jewish communities would gather money from the community to buy animals for slaughter. They would then bring animals all the way to the temple in Jerusalem, Hartman said.

"This fuels the economy in Jerusalem: The merchants are making a lot of money and the city prospers," Hartman said.