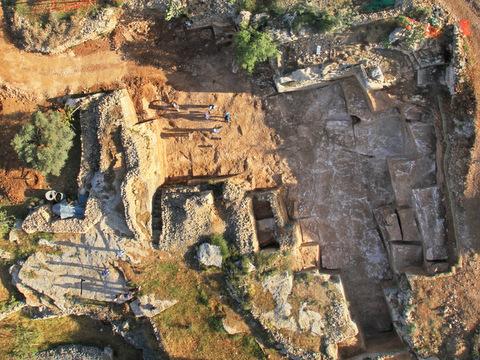 A picture of the quarries. Photographic credit: Skyview Company, courtesy of the Israel Antiquities Authority

Within the framework of an excavation project the Israel Antiquities Authority is conducting prior to the construction of Highway 21 by the Moriah Company:

Tools used by the quarrymen and a 2,000 year old key were also uncovered at the site. The huge stones that were quarried there were presumably used in the construction of the city’s magnificent public buildings

An enormous quarry from the time of the Second Temple (first century CE) was exposed in recent weeks in excavations the Israel Antiquities Authority is carrying out prior to the paving of Highway 21 by the Moriah Company. A 2,000 year old key, pick axes, severance wedges etc are also among the artifacts uncovered during the course of the excavation.

According to Irina Zilberbod, excavation director on behalf of the Israel Antiquities Authority, “The quarrying phenomenon created a spectacular sight of bedrock columns and steps and craters of sorts that were the result of the rock-cuttings. What remained are rock masses in various stages of quarrying, and there were those that were found in a preliminary stage of rock-cutting prior to detachment. Some of the stones that were quarried are more than 2 meters long. The giant stones were probably hewn for the sake of the construction of the city’s magnificent public buildings”.

Zilberbod explains, “The pick axes were used to cut the severance channels around the stone block in the bedrock surface and the arrowhead-shaped detachment wedge, which is solid iron, was designed to detach the base of the stone from the bedrock by means of striking it with a hammer. The key that was found, and which was probably used to open a door some 2,000 years ago, is curved and has teeth. What was it doing there? We can only surmise that it might have fallen from the pocket of one of the quarrymen”.

The enormous quarries that were exposed – totaling a 1,000 square meters in area – join other quarries that were previously documented and studied by the Israel Antiquities Authority. Research has shown that the northern neighborhoods of modern Jerusalem are situated on Jerusalem’s “city of quarries” from the Second Temple period.

The question arises: why did the quarrymen select this specific region. Researchers speculate that the answer to this lies in the Meleke rock formation found there, which is a type of rock that is easily quarried and hardens immediately after it is hewn.

In addition to this, since the northern area is topographically higher than the city of Jerusalem in the Second Temple period, it was presumably easy to transport the huge stones, some which weighed tens if not hundreds of tons, down hill along the slope to the construction sites. An ancient road dating to the Second Temple period was exposed next to the quarry and it was probably used to move the large stones.

Another puzzle regarding the transportation of such large stones is how were they actually moved? Presumably this was accomplished by means of oxen and wooden rollers, but the contemporary historical sources also mention giant wooden lifting devices. 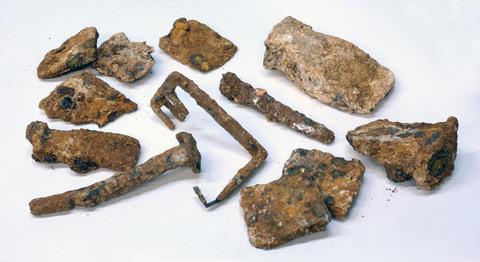 Various tools, including a 2,000-year-old key (center of image), were also discovered at the Second Temple quarry in Jerusalem. CREDIT: Clara Amit, courtesy of the Israel Antiquities Authority 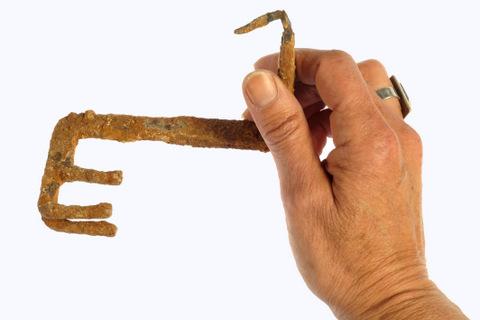 A picture of the key. Photographic credit: Clara Amit, courtesy of the Israel Antiquities Authority