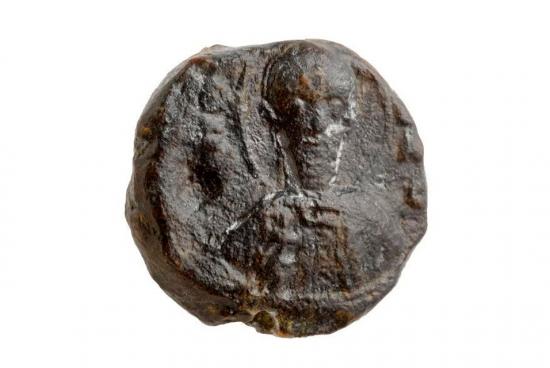 Picture of the seal. Photo: Clara Amit, courtesy of the Israel Antiquities Authority.

An 800 Year Old Lead Seal Stamped by the Monastery of St. Sabas Was Found in Archaeological Excavations carried out by the Israel Antiquities Authority in the Bayit VeGan Quarter in Jerusalem Archaeologists believe a farmstead discovered during excavations may have been part of the monastery’s property during the Crusader Period A rare seal of the Monastery of St. Sabas was excavated in the Bayit VeGan quarter in Jerusalem. The seal was unearthed a year and a half ago, but it was only after processing and studying the material that it was identified as a unique seal that was stamped by the laura – the Monastery of St. Sabas. During the summer of 2012 the IAA conducted two archaeological salvage excavations at the Horbat Mizmil antiquities site in the Bayit VeGan neighborhood in Jerusalem. These revealed the remains of a farmstead constructed during the Byzantine period (fifth–sixth centuries CE). The site, was abandoned at the end of the Byzantine period, and resettled during the Crusader period (eleventh–twelfth centuries CE), reaching its maximum size during the Mamluk period (thirteenth–fifteenth centuries CE). The artifacts discovered during the excavations reflected daily life in the farmstead. Surprisingly, while processing the excavation finds a rare lead seal dating to the Crusader period came to light. The seal or bulla as it is known in Latin, was affixed to a letter, and was meant to ensure the document would not be opened by unauthorized persons. The bulla consisted of two blank lead disks and had a string that passed through a channel between them. In sealing the letter these were pressed together with a pincher shaped object with dies, creating the double faced seal. The 800 year old seal is in excellent condition. A figure is discernible on the obverse side of the seal and the reverse bears an inscription in Greek. The object was examined by Dr. Robert Kool of the IAA and Prof. Jean-Claude Cheynet of France, who identified it as a seal stamped by the laura – the Monastery of St. Sabas during the Medieval period. Dr. Yuval Baruch, the IAA's regional archaeologist responsible for Jerusalem and its environs, presented the unique find to the Greek Orthodox Patriarch of Jerusalem, Theophilos III, who noted its importance for the history of Christianity in the Holy Land and its significance for archaeological research. St. Sabas, or according to his Syriac name, Mar Saba, was one of the most important and influential leaders of the Christian monastic movement developing in the Judean Desert during the Byzantine period. Sabas established several monasteries, but his crowning achievement was the construction of the Monastery of St. Sabas, referred to as the “Great Laura” in the Byzantine period. The monastery, situated on a cliff overlooking Nahal Kidron, was home to several hundred monks. This is the only monastery in the Judean Desert continuously inhabited since its foundation, and even today there are circa ten Greek monks who reside in the monastery belonging to the Greek Orthodox Church. Sabas was greatly involved in the local political and religious affairs of Byzantine period Palestina and twice he traveled on foot to the capital Constantinople in order to request assistance from the emperor for the country’s inhabitants. Sabas was canonized following his death and his name appears among the list of Christian saints. The seal, shows a bearded bust of a saint wearing a himation and holding a cross in his right hand and the Gospel (?) in his left hand. Surrounding it is a Greek inscription naming the saint: “Saint Sabas”. On the back of the bulla appears another longer Greek inscription “This is the seal of the Laura of the Holy Sabas”. According to Dr. Robert Kool “the Mar Saba monastery apparently played an important role in the affairs of the Kingdom of Jerusalem during the Crusader period maintaining a close relationship with the ruling royal family. The monastery had numerous properties and this farm may have been part of the monastery’s assets during the Crusader period. “ According to Benyamin Storchan and Dr. Benyamin Dolinka, excavation directors on behalf of the Israel Antiquities Authority, “this is an extraordinarily rare find because no such seal has ever been discovered to date. Also, the object possibly contributes important historical information about the surroundings of the site in the Bayit VeGan neighborhood. The excavated farmstead may well refer to a farming settlement sold to the monastery in 1163–1164. The document, part of the archives of the Church of the Holy Sepulcher during the Crusader period, mentioned a farming settlement by the name of Thora, whose whereabouts are unknown. It is quite possible the document refers to this site”.