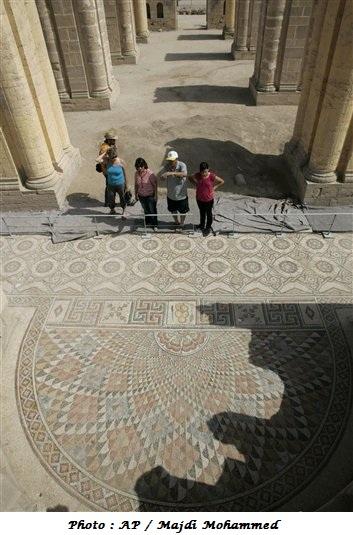 JERICHO, West Bank — Visitors to ancient Jericho got a rare glimpse Sunday of a massive 1,200-year-old carpet mosaic measuring nearly 900 square meters (9,700 square feet), making it one of the largest in the Middle East.

The small red, blue and ochre square stones laid out in sweeping geometric and floral patterns cover the floor of the main bath house of an Islamic palace that was destroyed by an earthquake in the eighth century. Since being excavated in the 1930s and 1940s, the mosaic has largely remained hidden under layers of canvas and soil to protect it against sun and rain.

Starting Sunday, a small section will be laid bare for a week, as part of Jericho's 10,000th birthday celebrations. The mosaic then will be covered up again until the money is found to build a roof that would serve as a permanent weather shield, said Palestinian archaeologist Hamdan Taha.

Biblical Jericho attracts a steady flow of pilgrims, but the small Jordan Valley oasis is making a major push these days to become a magnet for tourists, presenting itself as the oldest city on earth. Marking the 10,000th birthday Sunday is entirely random, though, with archaeologists saying they could be off by hundreds of years in dating the first human settlement in the area.

However, throwing a birthday party is a way of spotlighting Jericho's attractions, including Hisham's Palace, a winter retreat built in the eighth century during the Umayyad empire. Palestinian Prime Minister Salam Fayyad held his weekly Cabinet meeting in Jericho on Sunday to mark the town's birthday, and was to tour the palace later in the day.

With the large mosaic mostly covered up, a smaller one in the audience room next to the bath house has been getting all the attention. It shows two gazelles nibbling at the leaves of an apple tree, while nearby a lion attacks another gazelle from behind. A small house was built over the tree mosaic to protect it.

Now archaeologists are trying to find a way to keep the large mosaic permanently on display as well, scrambling to raise at least $2 million to build a roof above it. One proposed solution — a shield that looks like a large upended wooden crate — was contributed by award-winning Swiss architect Peter Zumthor. A model of his design is on display at the site.

Taha said a final decision on the design of the weather shield has not yet been made. 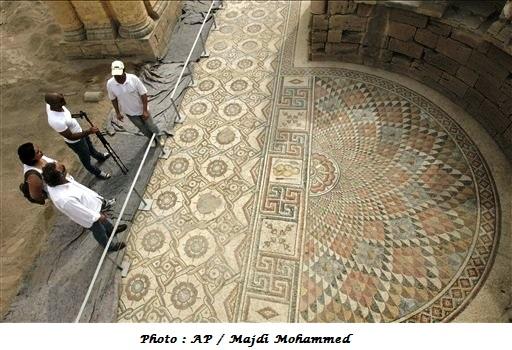 During a visit Sunday, several dozen square meters of the mosaic were visible, the colors of the small square stones unexpectedly bright. A walkway of blankets separated the exposed part of the mosaic from covered area, hidden under sand. A guide told tourists they were lucky to get a peek at the mosaic.

Archaeologist Iyad Hamad, who is in charge of the palace site, said he expects far larger crowds of tourists once the large mosaic is on display permanently. He said turnout had surged during brief periods in recent years when the mosaic was uncovered for research.

Hamad said it's the largest carpet mosaic in the Middle East, a claim backed by Marwan Abu Khalaf, an archaeology professor at Al-Quds university and a fellow at the W.F. Albright Institute of Archaeological Research in Jerusalem. Abu Khalaf said the fine workmanship suggests that the Umayyads hired master artists instead of ordinary craftsmen to lay the mosaic.