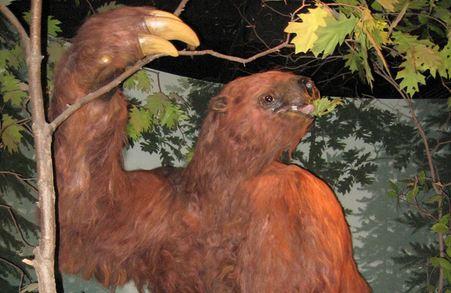 The discovery of what appear to be dozens of cut marks on the femur of a gargantuan, 1,300-kilogram Jefferson's ground sloth is being hailed as the earliest trace of a human presence in the Great Lakes state. Photograph by: HANDOUT PHOTO: , Iowa Museum of Natural History.

A Canadian scientist's analysis of ancient animal remains found in Ohio — including the leg bone of an extinct giant sloth believed to have been butchered by an Ice Age hunter more than 13,000 years ago — has added weight to a once-controversial argument that humans arrived in North America thousands of years earlier than previously believed.

The discovery of what appear to be dozens of cut marks on the femur of a gargantuan, 1,300-kilogram Jefferson's ground sloth is being hailed as the earliest trace of a human presence in the Great Lakes state.

But the find also represents a significant new piece of evidence in support of the theory that the first inhabitants of Canada, the U.S. and the rest of the Americas were not the so-called Clovis people — known from distinctive tools they left at various archeological sites from about 12,600 years ago — but a much earlier wave of Ice Age migrants ancestral to many of today's New World aboriginal populations.

The butchered-sloth discovery — recently confirmed by University of Manitoba researcher Haskel Greenfield, co-author of a paper published in the latest issue of the journal World Archaeology — bolsters the growing consensus that prehistoric Asians crossed from eastern Russian to western Alaska as early as 16,000 years ago, possibly travelling down the coast of B.C. before spreading to the continental interior and the far reaches of South America.

These purported "pre-Clovis" people left indications of their presence in the Western Hemisphere that only recently have become accepted as solid proof by many mainstream archeologists.

The sloth bone took a circuitous route to scientific significance. Discovered in an Ohio swamp at least 95 years ago, the specimen was first documented by a U.S. geologist in 1915 before sitting on the shelf of a local museum for close to a century, overlooked by modern researchers.

U.S. experts led by an archeologist from the Cleveland Museum of Natural History recently re-examined the bone and other ancient remains, and contacted Greenfield — a specialist in early human tools and hunting — to help determine if the 44 incisions on the giant sloth's femur were, in fact, made by humans stripping meat from the downed beast.

"I went down to Cleveland full of skepticism," Greenfield told Postmedia News. "Partly, it was because other colleagues of mine had seen the specimen very briefly (and from a distance) and were sure that the marks were natural. It was only when I got up close to the specimen and began to look at it microscopically did I find a very different situation — one that I could not discount as caused by natural forces."

Greenfield said it was "the total pattern that overturned my skepticism — the location of the marks, their shape, their size, the direction that they were made from, etc., as well as the fact that the morphology of the marks was most similar to those made by stone tools."

But apart from the breakthrough discovery that early humans were hunting giant sloths as far north as the Great Lakes, the extreme age of the specimen — pegged at 13,435 to 13,738 years old through radiocarbon dating — offered a fresh clue in the mystery surrounding humanity's arrival in the Americas and dispersal throughout the hemisphere.

"There is a variety of other pre-Clovis evidence that has accumulated slowly and surely in recent years," said Greenfield. "Our study demonstrated that people were in northern Ohio and predated Clovis in the region by about 700 years."

The Canadian scientist added that, "my feeling is that people came down the west coast of North America, not through a supposed ice-free corridor between the Rockies and the Laurentide glacier" as traditionally believed by North American archeologists.

"As they were coming down the coast, they encountered the massive glaciers that covered the Rockies and could not have crossed it easily into the interior of the continent," said Greenfield. "These early peoples would have been adapted to a coastal existence . . . Probably the origins of the inhabitants of the interior of North America were from a small band of these early hunter-gatherers who branched off from these coastal peoples," first moving inland in Southern California or Mexico before gradually proliferating north and east across North America, while others continued their coastal trek to Central and South America.