A team of archaeologists from Preservation Virginia has been at work since 1994 uncovering the buried secrets of Jamestown. When the Jamestown Rediscovery Archaeological Project started, the hope was to find the site of the original 1607 James Fort, which had been written off for more than 200 years as lost to shoreline erosion.

Since then, the team has discovered the fort and more than a million artifacts in the ground. The project made waves in 2013 when evidence was found that a 14-year-old English girl living in James Fort in the first few years of its existence had been cannibalized. Though no more remains of suspected cannibalism victims have been discovered, the archaeologists are pulling artifacts out of the ground every day and learning more about the lives of the people who lived in Jamestown during its infancy.

Archaeologists Work to Uncover Pit Near Edge of Fort Boundaries

When Capt. John Smith — an explorer who played an important role in the founding of Jamestown — wrote about the early days of the fort, he said it was expanded from three sides to five sometime in 1608. According to Smith’s writing, there were as many as 50 houses on site by 1609.

But the archaeologists have so far only found the remains of 10 buildings from that era, and there are no surviving maps depicting buildings or their uses that they can turn to as a guide for where to dig. The only maps left from that time are of the region and depict the fort as a small triangle.

In the last few weeks, the archaeologists have discovered a sharp right angle to the pit, which indicates it may have been a cellar. That could mean there was a building located at the site, which would be the second building discovered outside the original three walls of the fort. If a building was on the current dig site, its purpose remains unknown.

Schmidt said the only other building discovered outside the original walls is to the southeast of the current dig site, near the James River. The archaeologists have dubbed it “the factory” after discovering three hearths inside its remains, which signify it was potentially used for industry. Another theory is that the factory was used as a trading post with the indigenous people in the area.

Much remains to be learned about the current dig site, however the archaeologists are beginning to develop theories.

There is also speculation a well may have existed inside the pit, which could mark the second time a well has been discovered inside a building at Jamestown. The other such building was located inside the fort and was guarded by the colonists, as it was used for storing provisions. The original settlers who constructed that building were told to use it to store any gold and silver they discovered, however none was found.

The team is currently working through layers of trash from the post-James Fort period to try to reach what is known as an occupation layer, where they will find evidence of how the pit was used, Schmidt said.

Working through layers of dirt to reach the occupation layer is extremely time consuming, with the archaeologists carefully scraping out the dirt with small tools and then sending it in buckets to a station where it is sifted through a mesh screen so no artifacts are missed. During this part of the dig, numerous artifacts have been discovered, including an intact copper alloy spur believed to be from 1625 to 1650.

After screening, any artifacts found are brought to a nearby laboratory for further analysis. Schmidt said work is “only just starting” at the pit, and that the full dig is expected to take six to nine months. 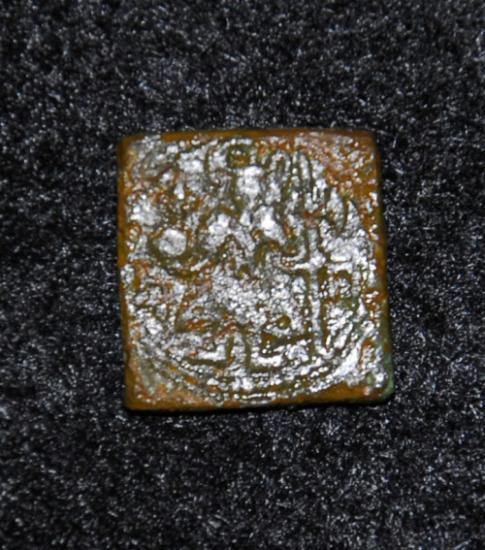 In past centuries, coins were often clipped by people looking to gather scraps of precious metals to sell. That created a need for coin weights, which were placed on one side of a scale with a coin on the other. If the two weights matched, the person weighing the coin would know the coin had not lost its value due to the clipping.

This coin weight, which was made in Antwerp and found at the dig sit in the last month, would have been used to check the value of a 16th-century gold Hungarian Ducat. The presence of the coin weight does not mean the colonists were using Ducats to trade, according to Merry Outlaw, the curator of collections for the rediscovery project. Typically coin weights were distributed in sets so the set’s owner had weights for dozens of coins even if he or she never encountered many of them.

A man brandishing a halberd — a two-handed weapon with an axe-like blade on the end — is visible on the face of the coin weight. His boots are along the bottom, while the blade of the halberd is to the right. This copper alloy spur, which has been dated to 1625 to 1650, was in remarkably good shape when it was found in the pit a few weeks ago, Outlaw said. The metal arch is called the spur, while the sharp wheel on the edge is known as a rowel, and both have emerged from the dirt in great condition.

Outlaw said spurs were often worn by the colonists as a status symbol. Even if the spur’s owner did not own a horse, wearing a spur indicated the colonist was wealthy enough to afford a decorative piece of metal to attach to his boots.